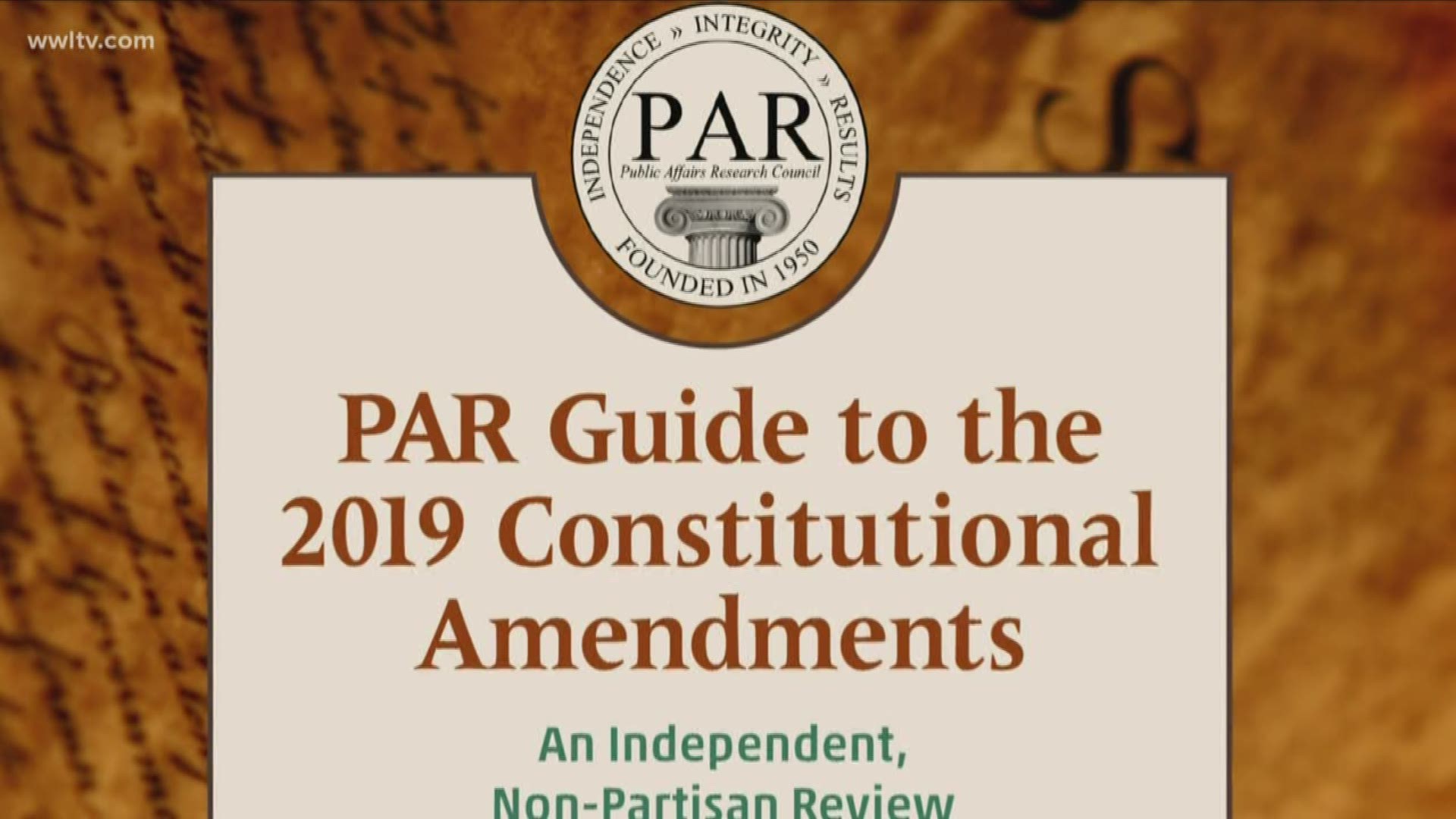 NEW ORLEANS — When Louisiana voters go to the polls for October's gubernatorial primary election, they will decide on four constitutional amendments.

The amendments deal with important changes to tax exemptions, affordable housing in New Orleans, and school funding, but the text on the ballot can be confusing.

What do those four constitutional amendments on Louisiana's 2019 ballot mean? Here's a breakdown:

"Do you support an amendment to exempt raw materials, goods, commodities, personal property, and other articles stored in public and private warehouses and destined for the Outer Continental Shelf from ad valorem taxes?”

A YES vote would mean: Louisiana will not be able to tax goods, such as offshore drilling equipment, stored in the state but intended to be used off the coast.

A NO vote would mean: Those goods may still be taxed unless ruled unconstitutional by courts.

What it means: This amendment is meant to clarify whether Louisiana can collect taxes on goods destined for the Outer Continental Shelf. The OCS is roughly the area in United States waters 200 miles off a state's coast.

The U.S. Constitution prevents states from taxing property destined for other states or countries, but there has been no specific ruling on whether that includes items destined to the OCS.

Historically, businesses have assumed that these goods could not be taxed, but some local tax assessors have started to assess them.

“Do you support an amendment to provide for appropriations from the Education Excellence Fund for the Louisiana Educational Television Authority, Thrive Academy, and laboratory schools operated by public post-secondary education institutions?”

A NO vote means: These three schools and public TV will not be added to a list of Education Excellence Fund recipients.

Thrive Academy did not exist when the fund was established in 1999.

“Do you support an amendment to protect taxpayers by requiring a complete remedy in law for the prompt recovery of any unconstitutional tax paid and to allow the jurisdiction of the Board of Tax Appeals to extend to matters related to the constitutionality of taxes?”

A YES vote means: The Board of Tax Appeals, an executive branch agency, would be able to rule on constitutional questions in tax disputes.

A NO vote means: Only allow courts would be allowed to rule on constitutional questions in tax disputes.

What it means: This amendment tries to speed up the process of appealing possible errors in tax bills by enhancing the power of the Board of Tax Appeals.

The board would be able to rule whether tax matters are constitutional under state or federal law. This allows taxpayers to have their entire tax appeal heard in one place rather than bouncing between the board and the court system if their case involves a claim of unconstitutionality.

The board's decisions could still be appealed to state courts.

All members of the Board of Tax Appeals are appointed by the governor and confirmed by the Senate.

“Do you support an amendment to allow the city of New Orleans to exempt property within Orleans Parish from all or part of ad valorem taxes that would otherwise be due for the purpose of promoting affordable housing?”

A NO vote would: Keep current law and the current tax structure in New Orleans.

What it means: Currently, all property tax exemptions are listed in the Louisiana Constitution, and additional exemptions can not be added by local governments.

The city is looking to create property tax exemptions for people who provide affordable housing. If passed, New Orleans can create a program that grants a tax exemption in exchange for affordable rents.

The program could target owner-occupied homes, rental homes or apartments. This exemption could not include properties with more than 15 units or short-term rentals.

The city might have to find a way to make up for any lost revenue that it could lose in the process.

Introduction
The Public Affairs Research Council of Louisiana (PAR) is an independent voice, offering solutions to public issues in Louisiana through accurate, objective research and focusing public attention on those solutions. PAR is a private, nonprofit research organization founded in 1950 and supported by membership contributions, foundation and corporate grants and special events.
Parlouisiana

Click to view your sample ballot or polling location.