Here's how prominent figures around the state reacted to the death of the widely admired Supreme Court justice. 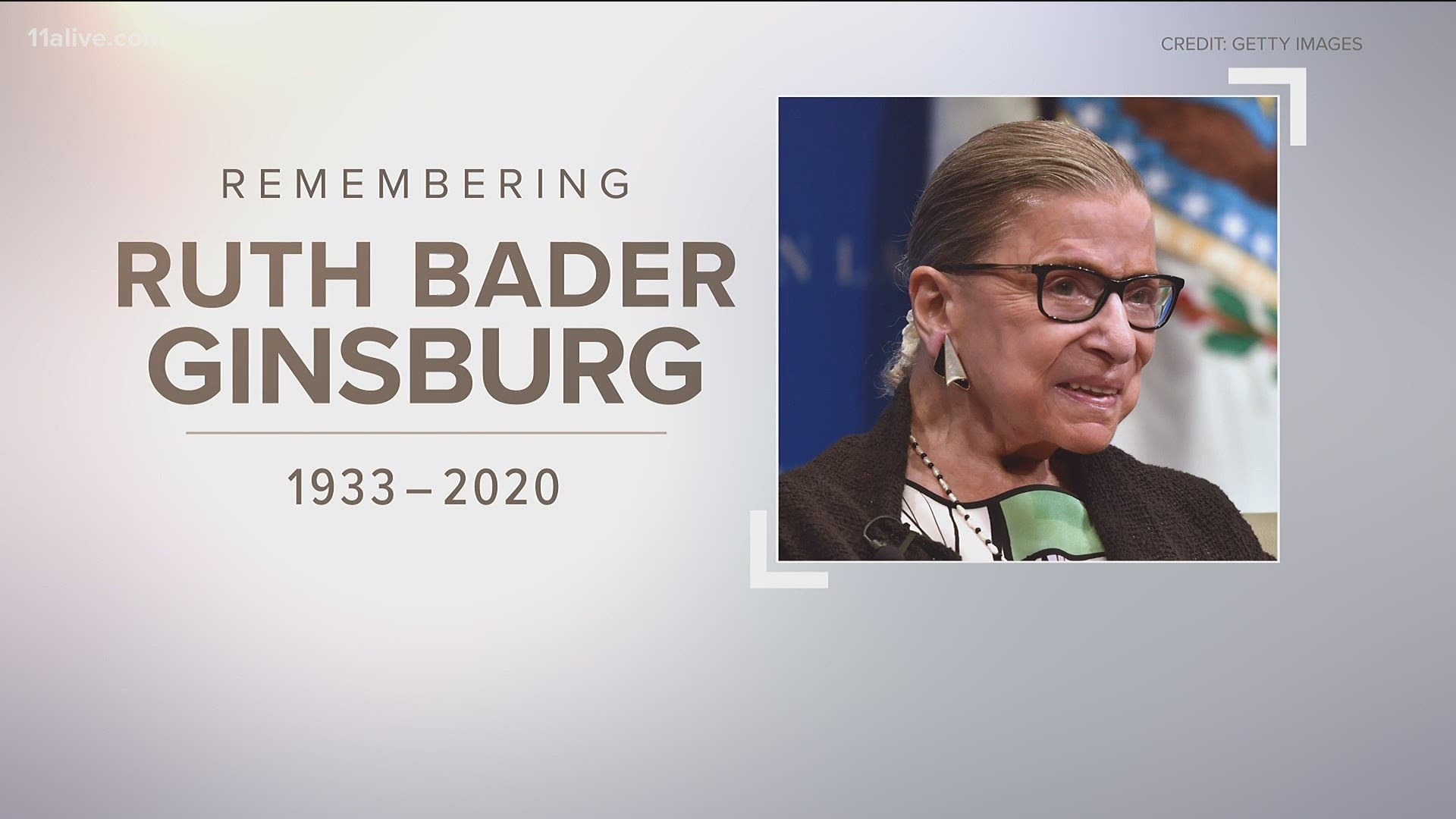 ATLANTA — Jimmy Carter remembered Supreme Court Justice Ruth Bader Ginsburg as a "powerful legal mind and a staunch advocate for gender equality" and said he was "proud" to have first appointed her as a federal judge, leading Georgia Friday night in paying tribute to the legendary jurist after her death at 87.

Carter, the 39th president, appointed Ginsburg to the U.S. Appeals Court in Washington, D.C. in 1980. He hailed her as a "beacon of justice during her long and remarkable career" in a statement on her passing.

"We join countless Americans in mourning the loss of a truly great woman," Carter said. "We will keep her family in our thoughts and prayers during this difficult time."

Gov. Brian Kemp also paid tribute, saying he would lower flags to half-staff at all state buildings until her internment.

"Justice Ginsburg was a trailblazer, poured her heart and soul into public service, and made a lasting, positive impact on our Great Nation," the governor said on Twitter. "Our prayers go out to her loved ones and colleagues as they mourn her passing."

Justice Ginsburg was a trailblazer, poured her heart and soul into public service, and made a lasting, positive impact on our Great Nation. Our prayers go out to her loved ones and colleagues as they mourn her passing.

Atlanta's mayor, Keisha Lance Bottoms, said in a statement that Ginsburg was "an iconic champion for women’s rights who overcame a lifetime of adversity to become a pioneering leader for fairness, civil rights, and human equality on the highest court in the land."

Georgia Republicans and Democrats alike honored the justice, whom Bernice King, the daughter of Martin Luther King, Jr. and CEO of the King Center, remembered as a "wonder."

"As we remember the wonder that was #RuthBaderGinsburg, let us bend more toward justice with the moral arc of the universe," King wrote on Twitter.

The great Zora Neale Hurston said, “There are years that ask questions and years that answer.”

This year is profound in that it is asking AND answering.

As we remember the wonder that was #RuthBaderGinsburg, let us bend more toward justice with the moral arc of the universe. pic.twitter.com/EZLmbcjNp9

Sen. David Perdue, a Republican, issued a statement that recognized Ginsburg as a "brilliant legal mind" and praised her "hard work, tenacity and grit." His Democrat opponent in November, Jon Ossoff, said she had "profoundly advanced America’s evolution as a Constitutional republic truer to its founding principle of universal human rights."

In Georgia's other Senate race, Democrat Raphael Warnock, the reverend at the church where King once preached, Ebenezer Baptist, said Ginsburg's passing was an immeasurable loss that will be felt throughout our country."

"Her legacy of defending the most fundamental human rights from the Highest Court in the land will continue to inspire generations of Americans," Rev. Warnock said.

One of Georgia's own Supreme Court justices, Charlie Bethel, tweeted: "'Our nation has lost a justice of historic stature,' said the Chief Justice. Indeed. Rest In Peace, Justice. Thank you for your love of the law, care for our country, and work to make the world a better place."