WWL-TV is interviewing both gubernatorial candidates ahead of the election, giving them both a chance to outline their case for voters. 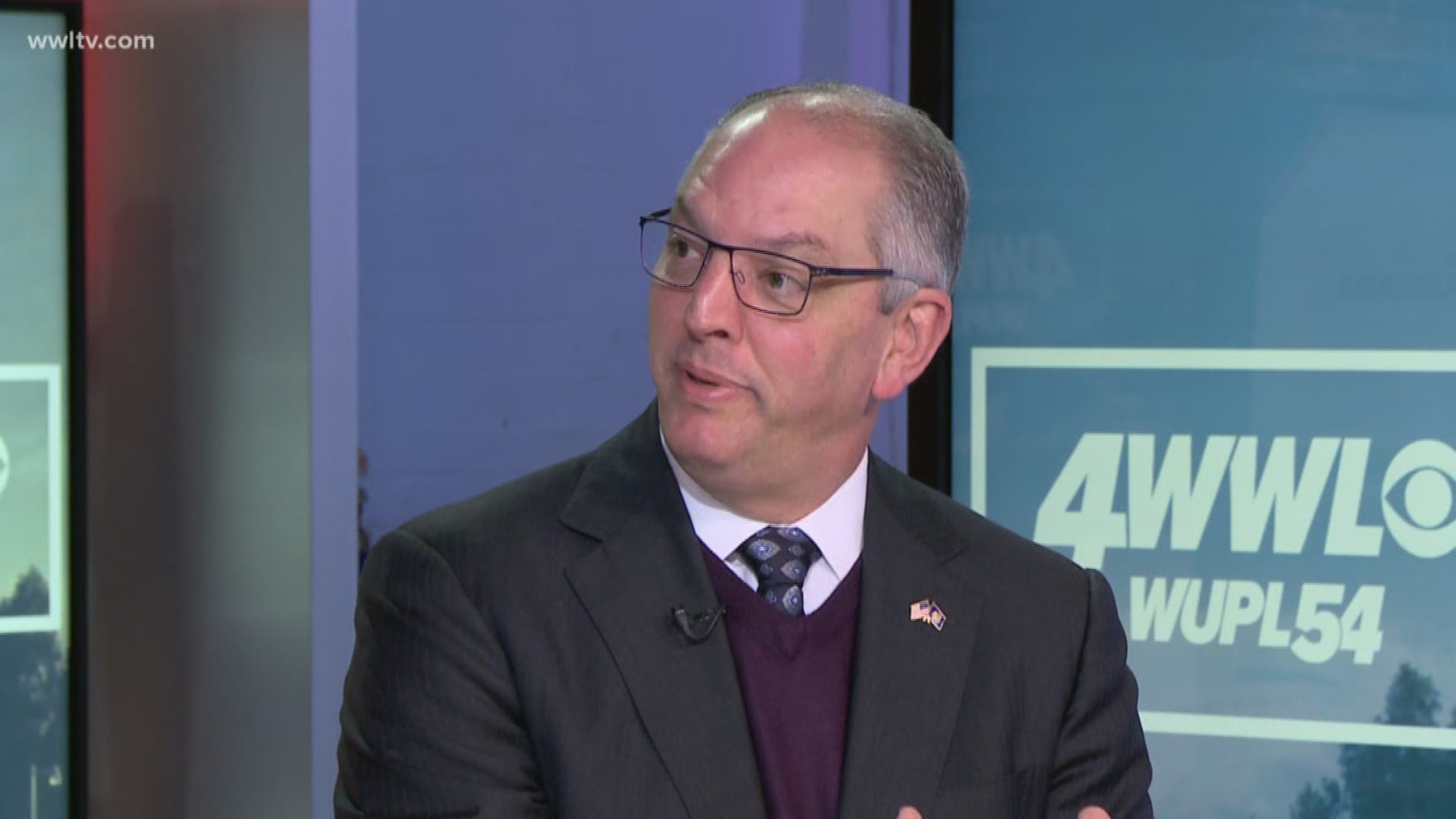 NEW ORLEANS — Gov. John Bel Edwards is facing a close election Saturday against Republican businessman Eddie Rispone. Ahead of that election, he sat down with WWL-TV's Eric Paulsen to talk about his record, plans for the future and what the state looks like now.

Here is a transcript from that interview:

Eric Paulsen: As you know, this Saturday voters will decide on will be leading the state of Louisiana for the next four years. Incumbent Governor John Bel Edwards is facing Republican opponent, Eddie Rispone in a runoff election for governor. Governor Edwards is in this morning to talk about why he thinks he deserves another term in office. Governor, thank you for coming in.

Paulsen: We appreciate that. First of all, you have been running on a campaign that says you have really improved the state of Louisiana. You pulled this state out of a out of a large deficit. Your opponent says that Louisiana is last in everything: education, economy, etc etc. And he blames a lot of it on you.

Edwards: Well, look, he says a lot of phony things out there. The fact of the matter is we had a $2 billion budget deficit when I walked into office that was what was left to me by Bobby Jindal. Those deficits are in the past. We now run three consecutive surpluses. He didn't talk about the $600 billion tax cut that we implemented last year and still had a $500 million dollar surplus because the economy is performing so well.

So, look, he says a lot of things. The fact of the matter is, on every relevant metric, Louisiana's performing much better than four years ago.

Paulsen: But there are rankings, where this state is near the bottom or at the bottom. But do they tell old story?

Edwards: Absolutely not, and in fact he talks about the US News and World Report. Much of the data informing those rankings come from 2014, 2015 and 2016. They don't show the economic growth, they don't show the fact that we now have the lowest percentage of people uninsured in our state's history. It's lower than the national average because of Medicaid expansion. They don't show the tremendous gains we've made because of criminal justice reform.

The FBI, FBI crime report for 2018 shows that crime, violent crime and murders, declined in Louisiana by more than the national average. So, no they absolutely don't show the whole story, and he knows that.

Paulsen: He also, and President Trump has echoed the same thing, they call you a radical liberal, democratic radical liberal or radical Liberal Democrat. Why do you think that they trying to make that stick?

Edwards: Well, look, that's just what you do in political season, right? When it was time to govern, the President invited me to meet with him nine times to talk about things like transportation, infrastructure, the opioid epidemic, criminal justice reform. And he certainly wasn't calling me any of those names at that point in time, because we work together, as I believe I should with with any president in order to do the best job as governor serving the state of Louisiana.

They know that I am very much in the middle of the political spectrum. I am a moderate. I am pro-gun. As you know, I am pro-life, and I'm a good fit for the state of Louisiana and the people of Louisiana understand that, which is why I'm going to win on Saturday.

They're very comfortable with me, where I am positioned in on the political spectrum, but they also know our state is doing much better than we were four years ago and they don't want to risk going back to the failed policies of Bobby Jindal. They don't want to entrust the governorship to someone who's going to rip health care away from 300,000 people, because of a Medicaid freeze, because that's exactly what would happen.

Just go ask the Pelican Institute or the Louisiana Budget Project. They've each done their studies. They showed that's what would happen.

Paulsen: He says he would keep the Medicaid...

Paulsen: As a Democratic governor in a very red state, how hard has it been to cross the aisle and go ahead and talk with your...

I work with everybody who in good faith wants to come to the table, roll up their sleeves and let's tackle Louisiana's challenges. That's what has proven effective, that's how I'm going to conduct myself in this, in the second term, and we're going to continue to move our state forward.

Paulsen: And a lot of people have said you've talked about what you've done in the past. What are your plans for the future?

Edwards: Well, first of all, we're going to make sure that our economy continues to grow so that we remain stable, and we can continue to invest in critical priorities, like education.

We've just now turned the corner. My plans are to get to the southern regional average in teacher pay over the next two to three years as we're able to do it. The number one new investment for a second term in education will be early childhood education. We have to do more for our young kids between ages zero and three to make sure they start kindergarten ready to learn.

That's the biggest deficit we have right now in our education system. We're going to address that and we're going to move our state forward. But look, the first thing we cannot do is go back to the policies that failed us, that drove our state so deep into the ditch, that left us that $2 billion budget deficit, and not just the deficit. We have cut higher education more than any other state in the nation, Eric.

We had raised tuition more than any other state in the nation. That's what Bobby Jindal did before I became governor. We cannot go back there because we're doing better.

Paulsen: Is it fair when he says that you take the blame for raising taxes in Louisiana?

Edwards: No, he never talks about the $2 billion budget deficit that Bobby Jindal left. He never says that the bills that he's complaining about were authored by Republicans, voted for by the Speaker of the House, a Republican, the Senate President, a Republican, majorities of Republicans in both the House and the Senate voted for them, and a two-thirds majority of the legislature as a whole.

And it was a balanced approach to a balanced budget. And he never mentioned the five, I'm sorry, the $600 million tax cut from last year.

So he's being highly selective. He he's phony, as you know, or as the viewers certainly know. But the fact of the matter is, we are much much better off today, as a state, than we were four years ago because of the balanced approach we've taken in Louisiana.

Ed. Note: WWL-TV will interview Republican businessman Eddie Rispone tomorrow so he can state his case for governor ahead of the Nov. 16 election.