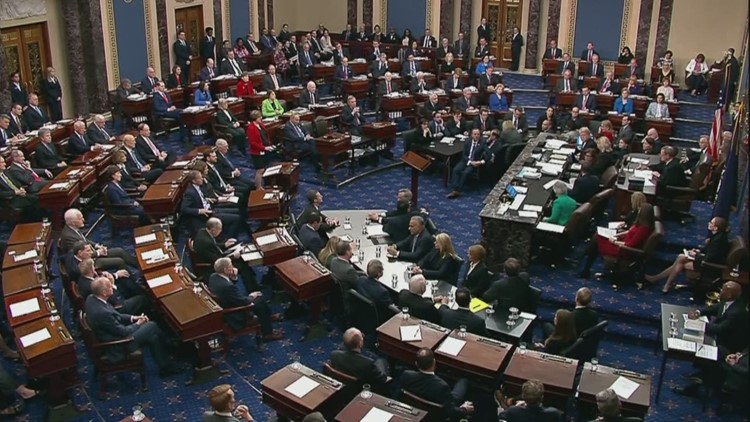 WASHINGTON — Louisiana's two senators voted to acquit President Donald Trump on the two articles of impeachment against him Wednesday, siding with nearly all Republicans in the U.S. Senate on the historic vote.

The outcome of the two votes - one for each charge - Was never in doubt before or during the weeklong impeachment trial. Republican Sens. Bill Cassidy and John Kennedy voted against impeachment.

The historic vote was largely made along party lines. Utah Republican Mitt Romney was the lone Republican vote for impeachment on the first charge: abuse of power. He voted to acquit on the obstruction of Congress charge.

The final vote was 48-52 for the first count and 47-53 for the second. At least 67 senators would have been needed to remove Trump on either charge.

Cassidy officially announced his plan to vote against impeachment in a statement Wednesday morning. In the statement, he criticized the House of Representatives for not fighting the Trump administration in court over its refusal to provide documents and witnesses after subpoenas were issued for them.

“The role of the Senate is to judge the House’s evidence," Cassidy said. "Allowing the House to poorly develop a case, sacrificing thoroughness for political timing, would have forever changed the dynamic of the chambers respective to each’s role in the impeachment process."

Kennedy did not release a statement ahead of Wednesday's impeachment vote, but has been a supporter of the president throughout the process.

What are the articles of impeachment

The two articles of impeachment against Trump are for abuse of power and obstruction of Congress.

The case for both articles was laid out in a nine-page document released by House Democrats after several months of investigation, including weeks of closed-door and open hearing testimony from officials dealing with Ukraine.

The first charge comes from a conversation Trump had with Ukranian President Volodymyr Zelensky, which was flagged by a whistleblower as being possible improper.

The revelation of the whistleblower complaint and subsequent call summary released by the White House describing the interaction quickly drew the attention of lawmakers.

The call and other communications between top officials and Ukranian leaders were related to conditions Trump's White House was imposing on a potential visit to the White House and millions of dollars in military aid.

The military aid to help Ukranian troops fight Russian-backed separatists was approved by Congress, but held up by the Trump administration until shortly after the House began a formal investigation into the whistleblower's complaint.

The Trump administration has never publicly said why the aid was withheld, but Democrats suspect it was being used as a bargaining chip to convince Ukranian officials to announce an investigation into Hunter Biden, the son of Trump's 2020 rival Joe Biden.

Some testimony during the public impeachment hearings corroborates their suspicion, but Trump has repeatedly said he was trying to root out corruption in Ukraine, not hurt a political opponent ahead of the 2020 election.

The second charge against Trump is simpler than the first, and deals with his actions during the House's investigation of the Ukraine affair.

Congress, as the highest legislative body in the country, has the power to issue subpoenas for anybody for any reason.

But during the investigation, Trump ordered many top officials to ignore the congressional subpoenas, and refused to turn over documents congressional investigators subpoenaed.

Democrats accused Trump of preventing them from doing their congressionally-mandated job. In the impeachment resolution, they denounced the executive branch's defiance.

"In the history of the Republic, no President has ever ordered the complete defiance of an impeachment inquiry or sought to obstruct and impede so comprehensively the ability of the House of Representatives to investigate 'High Crimes and Misdemeanors,'" the resolution reads.

RELATED: CDC: Several planes carrying passengers from Wuhan, China coming to the US