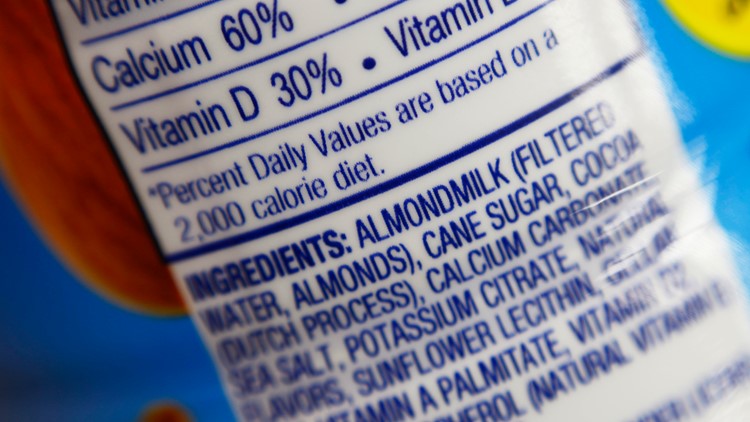 Photo by: AP
This Thursday, Feb. 16, 2017, photo shows the ingredients label for almond milk at a grocery store in New York. Dairy producers are calling for a crackdown on the almond, soy and rice “milks” they say are masquerading as the real thing and cloud the meaning of milk for shoppers. A group that advocates for plant-based products has countered by asking the Food and Drug Administration to say foods can use terms such as “milk” and “sausage,” so long as they’re modified to make clear what’s in them. (AP Photo/Patrick Sison)

BATON ROUGE, La. — A proposal that would call for “truth in labeling” of food products, including meat, sailed through the House Agricultural Committee on Thursday. The state’s top agricultural chief and conventional agricultural groups backed the bill, arguing it would protect the state’s farmers and give consumers clear choices.

A similar proposal, which would prohibit companies from labeling their plant-based products as milk, passed the House floor the same day in a 70-27 vote.

“We’re simply saying that what is on the label has to be what is in the product,” Commissioner of Agriculture Mike Strain told committee members. “You cannot manufacture something to sell it using a standard that we know.”

Both labeling bills are sponsored by Sen. Francis Thompson, D-Delhi, who said they aim to protect the state’s meat and dairy industries by identifying the source of food.

Traditionally, agriculture has been one of the state’s economic backbones for decades. But prices for dairy have plummeted and the number of dairy farms in the state has declined rapidly over the last decade. In 2004, Louisiana had over 300 dairy farms, according to The Dairy Alliance. Now the state has around 100.

The bills have received bipartisan support throughout this legislative session.

While opponents of the bill, including plant based food companies, said the proposed law would violate their First Amendment rights, Thompson and Strain said that could be decided through litigation.

“If we go to court over it that’s fine,” Thompson said. “If they can prove Tofu is meat then maybe I’m in the wrong ballpark.”

Some committee members were concerned the labeling bill could hurt small businesses that sell plant-based products. Rep. John Stefanski, R-Crowley, who co-sponsored the bill, said the liability would fall to the manufacturer who makes the product label.

The Louisiana Cattlemen Association and USA Rice, groups that support the agricultural industry, spoke in support of the bill.

“We’ve been producing beef in Louisiana since before we had a government, so we know what that product is, the pitfalls and what it takes to produce a good, healthy product for the consumers,” said James LeLeux, president of the Louisiana Cattlemen’s Association.

The bill’s proponents argued that plant-based food companies misrepresent their products to consumers to drive sales.

“Let me be clear. Rice is a grain, not a shape or a verb,” said Ross Thibodeaux, a rice farmer in Acadia Parish. “They will struggle moderately with consumers if they truthfully and honestly label these products for what they actually are: minced vegetable product or processed vegetable pieces.”

Impossible Foods, a plant-based foods company, and the Plant-Based Foods Association testified against the proposal.

The bill’s opponents said the measure is a “patchwork of labeling laws” that are overly broad and burdensome.

“That’s why the company exists, to make meat from plants,” said Tyler Jameson, who is the director of governmental relations at Impossible Foods. Jameson said the bill would only result in consumer confusion, rather than circumvent it.

The “Impossible Burger,” the company’s flagship product, is served in 25 Louisiana restaurants, Jameson said, including The Chimes, Plucker’s Wing Bar and Red Robin in Baton Rouge.

“The bill is mostly about truth in labeling, however study after study is showing that consumers are not confused by the labels of plant-based products,” said Nicole Manu, director of policy for the Good Food Institute, in a phone interview. The Institute is a nonprofit group that advocates for plant-based meat and milk companies.

“Producers of plant based products are using these meat terms as a way to signal to consumers how they can use their products, but they are in no way deceiving or trying to deceive consumers,” Manu said.

This session both House and Senate chambers already passed a seafood labeling bill, which is headed to Gov. John Bel Edwards’ desk to be signed into law.

The bill’s sponsor, Rep. Jerry Gisclair, D-Larose, has said that this law would benefit consumers and build awareness for local products.

The proposed law would require Louisiana restaurants to declare on their menus if they used foreign shrimp or crawfish in their dishes. If there is no menu, restaurants would have to post information on their front door or staff would have to tell customers about the origin of seafood.