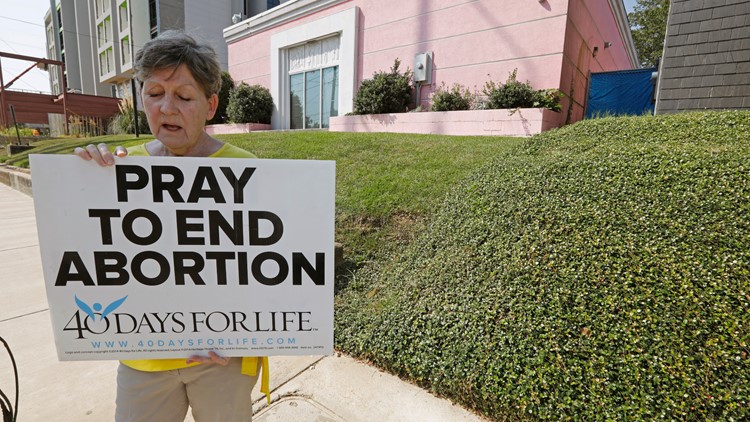 Photo by: AP
FILE - In this Oct. 2, 2019 file photo, an abortion opponent sings to herself outside the Jackson Womens Health Organization clinic in Jackson, Miss. Three judges from a conservative federal appeals court are hearing arguments, Monday, Oct. 7, over a Mississippi law that would ban most abortions after 15 weeks of pregnancy. Republican Gov. Phil Bryant signed the law in 2018, the state’s only abortion clinic immediately sued and U.S. District Judge Carlton Reeves blocked the law from taking effect. (AP Photo/Rogelio V. Solis)

NEW ORLEANS — A federal court that rejected Mississippi's 15-week abortion ban should have let the state present evidence about whether a fetus experiences pain, an attorney for the state argued Monday.

But a lawyer for Mississippi's only abortion clinic said the Supreme Court has been clear that a woman has a right to have an abortion before the fetus is viable.

The arguments came during a hearing at the 5th U.S. Circuit Court of Appeals on a Mississippi law that would ban most abortions after 15 weeks of pregnancy. It's one of many laws pushed by conservative states in recent years, aimed at trying to persuade the increasingly conservative Supreme Court to further restrict the amount of time when abortion is legally available, or even to overturn the 1973 Roe v. Wade decision.

That decision said women have the right to terminate pregnancies until viability, when a fetus can survive outside the womb.

Reeves wrote that viability must be determined by trained medical professionals, and the "established medical consensus" is that viability typically begins at 23 to 24 weeks after the pregnant woman's last menstrual period.

Mississippi and its supporters appealed to the 5th Circuit. Mississippi contends that Reeves overstepped his authority by only considering the case through the prism of viability.

"From that point on the outcome of this case was preordained," Paul Barnes, a special assistant attorney general, told the three-judge panel.

Barnes also suggested the 15-week standard had little effect on the Jackson clinic because they already refuse to perform abortions after 16 weeks.

"It is a prohibition for one week," Barnes said.

Hillary Schneller, a lawyer from the Center for Reproductive Rights which is representing the clinic, argued that the Supreme Court has been clear through decades of case law about a woman's right to an abortion before fetal viability.

"There is no dispute that 15 weeks is well before viability," she said.

At least one of the 5th Circuit judges seemed skeptical that viability should be the only standard. James C. Ho repeatedly asked whether a fetus feeling pain could ever be a factor in determining whether an abortion can be carried out. At one point, he asked if pain is "irrelevant."

"Where would we get that factual evidence if not at trial?" he asked.

The 5th Circuit handles cases from Mississippi, Louisiana and Texas, and it's generally considered one of the most conservative appeals courts in the U.S.

Louisiana passed a 15-week abortion ban in 2018, but it takes effect only if the appeals court upholds the Mississippi law.

Even as the court fight continues over the 15-week ban, Mississippi lawmakers passed another law this year banning most abortions at about six weeks, when fetal cardiac activity can be detected. Reeves also blocked that law, saying it "smacks of defiance to this court." Attorneys are filing separate arguments about it to the 5th Circuit. The hearing Monday did not reference the 6-week ban.