50 years after he took office as mayor of New Orleans on May 4, 1970, Moon Landrieu looked back in an interview Monday with WWL-TV political analyst Clancy DuBos 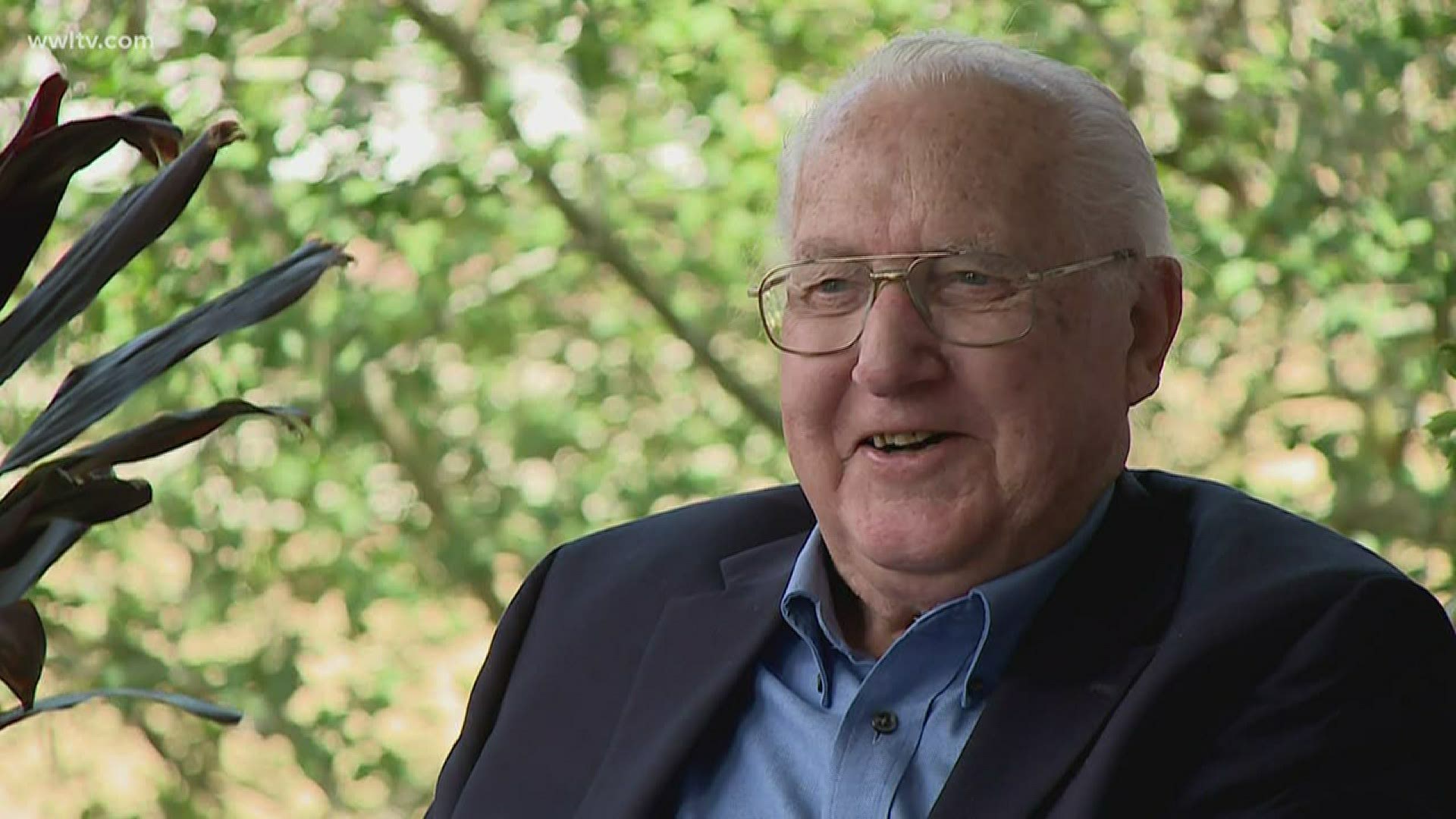 NEW ORLEANS — Monday (May 4) marked the 50th anniversary of the inauguration of Moon Landrieu as the 56th mayor of the city of New Orleans.

Landrieu, who turns 90 later this summer, is a New Orleans native and a Jesuit High School graduate who earned his undergraduate and law degrees from Loyola University. In the 1960s, he served in the state House of Representatives and on the New Orleans City Council.

To mark the 50th anniversary of his inauguration, Landrieu spoke Monday at his Broadmoor home with Clancy DuBos, Eyewitness News political analyst and Gambit political columnist. DuBos covered the early days of the Landrieu administration as a reporter for The Times-Picayune.

CLANCY DUBOS: We’re sitting on your front porch, which has been the center of the Landrieu family life, in many ways, for the last 60-plus years. I think it’s also one of the first places I ever interviewed you and it’s the first place I interviewed your daughter Mary, so this is the perfect place to have this interview. I want to take you back 50 years to this day, 50 years ago, almost this time, when you walked out of that door and stepped on this porch to take your children and your wife down to St. Louis Cathedral and then to City Hall to become the new mayor of New Orleans. What were your thoughts as you stepped on this porch 50 years ago?

MOON LANDRIEU: I’m not sure I can recapture every one of them, but I can tell you it was one of great satisfaction and pride, but I know it was also nervous and anxiety that we were beginning, not ending a campaign, but beginning the administration of a city that needed help. So I was very excited about it and we were treated so beautifully by everybody.

Credit: Landrieu Family
Moon Landrieu (right) takes the oath of office as mayor of New Orleans on May 4, 1970.

DUBOS: Moon, you are remembered for many things as mayor, one of the most oft-cited milestones was integrating the top tier of city government with your political appointments. You appointed the first black department head, Pete Sanchez, the first black chief administrative officer, Terrence Duvernay, and many other African-American appointees to top positions. Why was that so important to you personally?

LANDRIEU: I had lived through the… an early childhood where we were... slavery was ended of course, but we were still in a period in the 1930s of blacks being horribly treated. And it wasn’t just a question of racial justice, but from a practical standpoint, I recognized – as a politician, as a legislator and councilman – that we were wasting so much talent, wasting so much energy by precluding blacks from participation in all matters, government, business and all the important matters of the economics of the city. And I was determined, as I became mayor, to revitalize this city and to bring about racial integration, so that the city could enjoy the full benefit of the white and the black participants.

DUBOS: You endured some pretty withering criticism for your advocacy of integration and civil rights, even before you became mayor. What did you tell yourself to get through that and was there someone to whom you turned for advice or even solace during those years?

LANDRIEU: One of the people I spoke to often was Norman Francis, who was then dean of Xavier University and who had attended (Loyola University) law school at the same time I was there, so I consulted Norman quite often about these racial matters. Sometimes I just had to ignore what they said and move on with what I had to do and I hope that most of it was right but nobody’s perfect, and I’m sure there are errors I’ve made.

DUBOS: How is politics different today than from when you were coming up?

LANDRIEU: There are many, many, many differences, but from a visual and an effective standpoint, it’s the media. When I was coming up, you only had the papers and it was in the newspapers that you got your news, or you had radio. The visual impact of television was just tremendous and has made a huge, huge difference. Now, today it’s changing again, and there’s the social media and I can’t comment (laughs) because I’m not into that and don’t exactly know how it works. But as you say and you know this, nothing stays the same and how it’s going to change in the future, I can’t say, but it’s made this - this new communication, social media, is making a big difference.

DUBOS: What are you most proud of during your eight years as mayor?

LANDRIEU: My wife and my nine children. And I think that’s a very simple answer. I think when I look back at it and my life generally, it’s how lucky I was to find Verna and how blessed we were to have nine good kids and to revel in their births of 37 grandkids and their various careers in law and politics and other areas, so I’m a very grateful man.

Moon Landrieu served as mayor of New Orleans for two terms. After leaving office in 1978, he was named Secretary of Housing and Urban Development in President Jimmy Carter’s administration. Landrieu later served as a judge on the Louisiana 4th Circuit Court of Appeal.