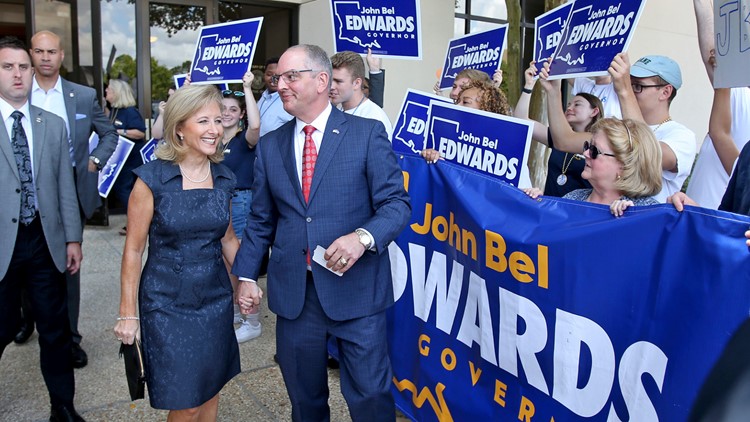 Photo by: AP
Louisiana Governor John Bel Edwards and his wife Donna leave the Louisiana Secretary of State's office after he signed up to run in the upcoming election, in Baton Rouge, La., Tuesday, August 6, 2019. The candidate sign-up period for Louisiana's statewide elections ends Thursday, with the governor's race at the top of the ballot. (AP Photo/Michael DeMocker)

The straight-laced West Point graduate, who shocked the ruby red state four years ago with his longshot election win, is battling to hold onto the Democrats' only governorship in the Deep South, with an onslaught of national GOP firepower, including President Donald Trump, aimed at ousting him.

Republicans believe they can recapture the governor's mansion in a state with no other Democratic statewide elected officials and a majority-GOP Legislature. But their divisions have left them staring down the prospect of another stunning loss.

The moderate Edwards — an anti-abortion, pro-gun, former Army ranger — is proving remarkably resilient deep in the heart of Trump country. He's leading in the polls, within striking distance of outright victory in Saturday's primary, when all candidates regardless of party run against each other on the same ballot.

Democrats crave a victory in Louisiana, along with governor's races in Kentucky and Mississippi, to show they can compete in Southern states, rather than ceding much of the territory to Trump.

National Republican leaders trying to send a message about 2020 are barnstorming the state seeking to energize GOP voters and keep Edwards from claiming enough cross-party support to top 50% in the primary and win without a November runoff. Vice President Mike Pence and Donald Trump Jr. have held get-out-the-vote events, and the president plans an anti-Edwards rally Friday in the state.

"They know we have to appeal to a broad number of Republicans and the majority of independents across the state of Louisiana," Edwards said. "They know how well the campaign is going, how well our administration has been received by the people of Louisiana."

If Edwards wins, many Republicans in the state will blame their own party, which failed to draw a well-known candidate and didn't rally around one clear choice in the race.

Two main GOP candidates are vying against Edwards on Saturday's ballot: Ralph Abraham, a third-term congressman and doctor from rural northeast Louisiana, and Eddie Rispone, a Baton Rouge businessman and longtime political donor who is largely self-financing his first bid for office.

The competing contenders are fracturing the GOP base, donor support and messaging efforts, and taking hits at each other even as they run against Edwards.

Without Abraham or Rispone carrying an official party endorsement, that has left Trump and other national leaders to call them "both great" without organizing support behind a party standard-bearer.

"The Democrats are fortunate. There's a united front," said Baton Rouge-based pollster Bernie Pinsonat. "Republicans are victims of their own success as a party. They can't pick one of them, and so they're running against a common enemy. They don't have any other strategy available to them."

Polls show neither Abraham nor Rispone emerging as the leading Republican contender, even though Rispone has spent nearly five times as much on the race as Abraham.

By Louisiana standards, the race could almost be considered a bit of a snoozer, without the prostitution scandals, corruption allegations and wisecracking characters of prior elections. Edwards emits a disciplined, military air and his Republican challengers lack the flair of some other Louisiana GOP officials. The more well-known prospects — U.S. Sen. John Kennedy, U.S. Rep. Steve Scalise and Attorney General Jeff Landry — all passed on the race.

Edwards gets credit for a bipartisan tax deal that stabilized state finances after a decade of budget crises and paid for a popular statewide teacher pay raise. His Medicaid expansion program dropped Louisiana's uninsured rate below the national average, and the criminal justice overhaul he championed ended Louisiana's tenure as the nation's top jailer.

But within the Democratic Party, Edwards is a complicated figure, drawing complaints for his opposition to abortion and his signing of a law that could ban the procedure as early as six weeks of pregnancy. Still, angered voters have few ways to register their outrage, with no major candidate in the race supporting abortion rights.

Notably, he has lashed out at the president on trade, blaming tariffs for a local steel mill's shuttering, prompting a rebuke from the Trump administration.

Abraham and Rispone are trying to make the race entirely partisan, tying Edwards to national Democratic Party leaders and bickering over which one of them has tighter ties to Trump. On state matters, the contenders say Edwards-backed tax hikes are chasing people and businesses out of Louisiana and the Medicaid expansion program has wasted millions.

"Our current governor is killing our economy," Abraham said in one debate.

Rispone tells supporters: "There's no reason why Louisiana doesn't lead the South when it comes to jobs and opportunities, except the leadership in the governor's seat."

In the final days of campaigning, Republicans have reminded voters about the Edwards administration's #MeToo moment, when his chief deputy, Johnny Anderson, resigned in 2017 amid allegations he sexually harassed a woman in the governor's office. One GOP attack ad features Anderson's accuser speaking directly to viewers, recounting Edwards' decision to hire Anderson even though he had previous sexual misconduct allegations against him.

Edwards responded with his own ad, featuring women defending his record.

Edwards' victory will hinge on whether he can get crossover support from Republicans and independent voters, even as national issues have sharpened dividing lines.

Jon Khachaturian, an independent casting his ballot in the New Orleans area during the early voting period, chose Rispone. He said Edwards has done a good job, but he didn't feel he could vote for a Democrat because of the party's conduct since Trump was elected.

Voter Jonathan Kloor, who has no political party affiliation, said he liked Edwards' support for higher education and his willingness to work with both parties. He said his vote for Edwards wasn't impacted by national issues.

"You have to tune that out and decide what's important for the state," Kloor said.