Kennedy said he chose to vote against certifying Biden’s win in Arizona because it only accounted for 11 electoral votes and would not have affected the outcome. 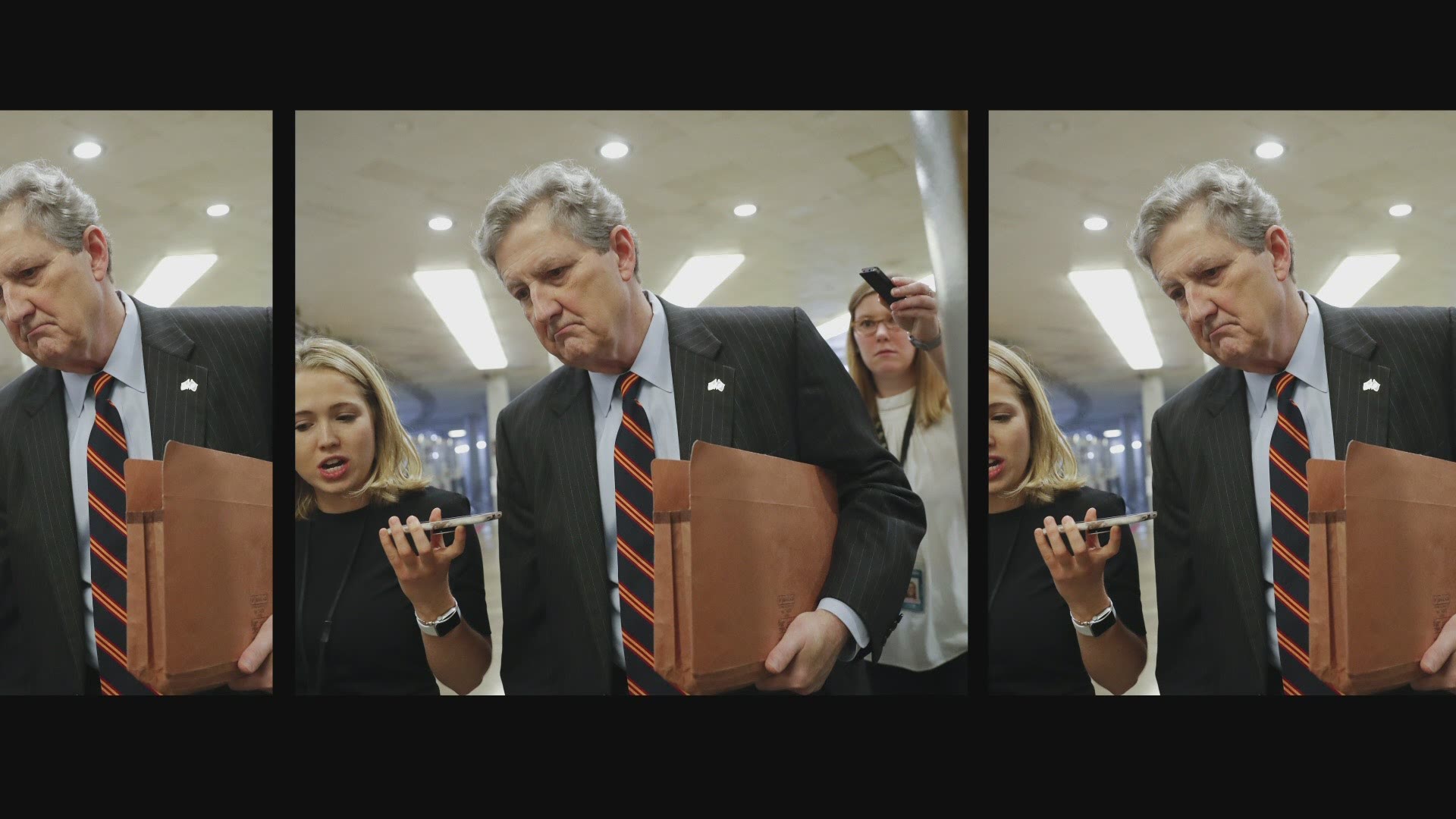 NEW ORLEANS — Sen. John Kennedy said House Republicans pressured him to help overturn Joe Biden’s victory over Donald Trump in the 2020 presidential election but he refused, instead voting to object to the certification of just one disputed state that he knew would not alter the outcome.

Kennedy said he chose to vote against certifying Biden’s win in Arizona because it only accounted for 11 electoral votes and would not have affected the final outcome.

“There were some members of the House that wanted to overturn the election and they wanted me -- I won't speak to others -- to vote to object to enough states to equal votes that would have overturned the election. And I said, ‘No, I'm not going to do that.’”

WWL-TV had been asking to interview Louisiana’s junior senator since shortly after Congress finalized Biden’s 306-232 Electoral College win Jan. 6, a process that was interrupted by a deadly insurrection by pro-Trump rioters.

“You will never find where I ever said, anywhere, that the election was stolen or not stolen,” Kennedy told WWL-TV in his first extended interview about his votes Jan. 6 and the Capitol riot that attempted to derail the peaceful transfer of power.

Asked what his position is on whether the election was stolen, Kennedy said, “I think there were election irregularities” but no proof it would have made a difference.

Trump’s false claims that the election was “stolen” through widespread fraud -- which were repeatedly debunked in courts across the country, through recounts and audits in closely contested states and by his own attorney general – continue to roil the Republican Party.

The head of the House Republican Caucus, U.S. Rep. Liz Cheney of Wyoming, was ousted Wednesday from that leadership position because of her ongoing criticism of Trump.

The staunch conservative and daughter of former Republican Vice President Dick Cheney was one of 10 GOP House members to join Democrats in impeaching Trump for inciting the Jan. 6 insurrection. She has continued to accuse Trump of pushing “the big lie” and vowed to keep fighting to “make sure the former president doesn’t get anywhere near the Oval Office.”

The issue has also divided Louisiana’s two Republican senators, with Sen. Bill Cassidy saying Biden won the election fairly and voting with five other Republicans to convict Trump at his impeachment trial. Kennedy voted not only to acquit Trump at that trial but also joined five other senators to challenge Biden’s election win in Arizona.

Kennedy’s position on Jan. 6 in the months after has been more nuanced than some other Trump loyalists, however. After the rioters were cleared from the Capitol, Kennedy voted to accept Biden’s larger margin of victory in Pennsylvania, another state where senators joined members of the House to contest the result.

“Here’s what my thinking was: In my opinion, it is a demonstrated fact that in some states, Democrats exploited the pandemic to change their state's election laws in an unconstitutional manner,” he said in the interview with WWL-TV last week.

Kennedy was referring to expanded mail-in voting access, ballot curing and extended deadlines for receiving mailed ballots, which he said were granted by Arizona, Pennsylvania and Georgia election officials without proper legislative approval.

“Now, having said that, I have never seen demonstrated evidence proven in a court of law that it made a difference. I'm not saying it did. I'm not saying that it didn't. I'm not sure anybody knows,” he said.

Kennedy acknowledged that “some people” say there were no significant voting irregularities at all, but said even if that were true, “people perceived that there were. And that's undermining our election integrity.”

Kennedy is up for re-election this year. He wants certain changes to state election laws to restore voters’ faith in the process.

He wants to limit voting to a single day, stronger voter ID requirements and restrictions on mail-in ballots, including stopping the collection of mail-in ballots by third parties to deliver in batches, something Republicans call ballot “harvesting.” He said there’s nothing inherently fraudulent about mail-in ballots, but they are more susceptible to it.

“If you won the Powerball tomorrow, you're not going mail in your ticket to collect. You're going to go down there in person,” he said. “And so I think we need to be extra careful in the mail ballot. And I think we really need to strongly encourage the states to figure out a way to count those mail ballots ahead of time so we can announce a winner on election night.”

Democrats, meanwhile, are pushing legislation to expand ballot access, limit the redrawing of congressional districts by state legislatures and toughen campaign finance laws to expose contributions from wealthy donors. The effort passed the House in March and is being hotly debated this week in the Senate.

“What do they all have in common? Violence,” Kennedy said.

That violence came to his place of work on Jan. 6. Kennedy condemned the insurrection in the strongest of terms, calling it “a fantastic impression of hell.”

But he also called for equal condemnation of violence at Black Lives Matter and other protests that followed the murder of an unarmed Black man, George Floyd, by Minneapolis Police on May 26, 2020.

Asked if the Capitol riots should be set aside from other riots in cities around the country because it was an attack on the seat of American democracy, Kennedy said, “You need to go to Portland. Do you think they're not trying to overthrow the government out there?

“Woke violence, unwoke violence: It's violence,” Kennedy said. “And every person who does it should be prosecuted. And until they are, what you will allow is what will continue, in my opinion.”

He suggested the summer riots were no less important for small business owners in Chicago whose stores were burned down or for the families of those killed.

Five people died in the Jan. 6 insurrection. The number of people killed in last summer’s riots varies. The Washington Post reported 27 deaths were linked to protests or subsequent violence between Floyd’s death and the end of August. An analysis by the conservative online magazine The Federalist put the death toll at 47.

CLARIFICATION: This story was updated May 18, 2021, to replace the word "killed" with "died" in reference to the five people who died during the insurrection. The D.C. Medical Examiner only ruled one of the five a homicide. The examiner determined the four others died of natural causes during the riot, such as heart attacks and strokes.

RELATED: 'I will not sit back and watch in silence': Liz Cheney says Trump, GOP backers threaten democracy