The lawmakers, about a quarter of Louisiana's 105 state representatives, allege without evidence that there was widespread fraud in six states

NEW ORLEANS — A group of 24 Louisiana state legislators sent a letter to the state's congressional delegation urging them to support a long-shot effort by Republican partisans to undermine the electoral college and reject certified results from a handful of swing states won by Joe Biden.

The lawmakers, about a quarter of Louisiana's 105 state representatives, allege without evidence that there was widespread fraud in Arizona, Georgia, Michigan, Nevada, Pennsylvania and Wisconsin.

All of those states went for Joe Biden, who was heavily favored to win the election headed into November. Louisiana's eight electoral college votes went to Donald Trump.

To date, there has been no credible evidence put forward showing any kind of widespread voter fraud, especially on the scale that would tip an election in several states.

In the weeks since the election was called by media outlets and certified by state election officials across the country, President Donald Trump, along with some of his allies and supporters, have railed against the country's choice.

Trump has -- without evidence -- repeatedly claimed that the election was marred by fraud and fake ballots, often targeting mail-in voting, which spiked dramatically because of the coronavirus pandemic.

But judges across the country, including many of Trump's own appointees, have thrown out at least 10 lawsuits from the outgoing president's campaign because they lacked any tangible evidence that fraud had taken place.

In fact, election security experts say the 2020 election was the most secure in modern history.

This fact didn't stop the Louisiana lawmakers from jumping onto what may be the last concentrated effort to reject the results of the election: a plan to have the U.S. Congress reject certification of the electoral college, allowing federal lawmakers to vote for president on behalf of their states in a process that skews Republican.

The plan is seen by analysts as all but impossible. Louisiana Rep. Clay Higgins and a handful of other representatives plan to oppose the certification anyway.

Generally, certification of the electoral college by Congress has been seen as a formality in the peaceful transition of power every four to eight years.

But Trump, who also claimed fraud before and after his 2016 presidential win, has taken to Twitter against some of his own allies, attacking those seen as not fighting hard enough for him during the process, even as the Biden administration begins transitioning into the White House.

In their letter, which is partly addressed to Clay, the state lawmakers outlined a bullet-point list of "irregularities, fraud and abuse" that they say prove the results can't be trusted. But each one of the claims made in that list has already been found to be false or misleading.

You can read the full letter here. Story continues below. 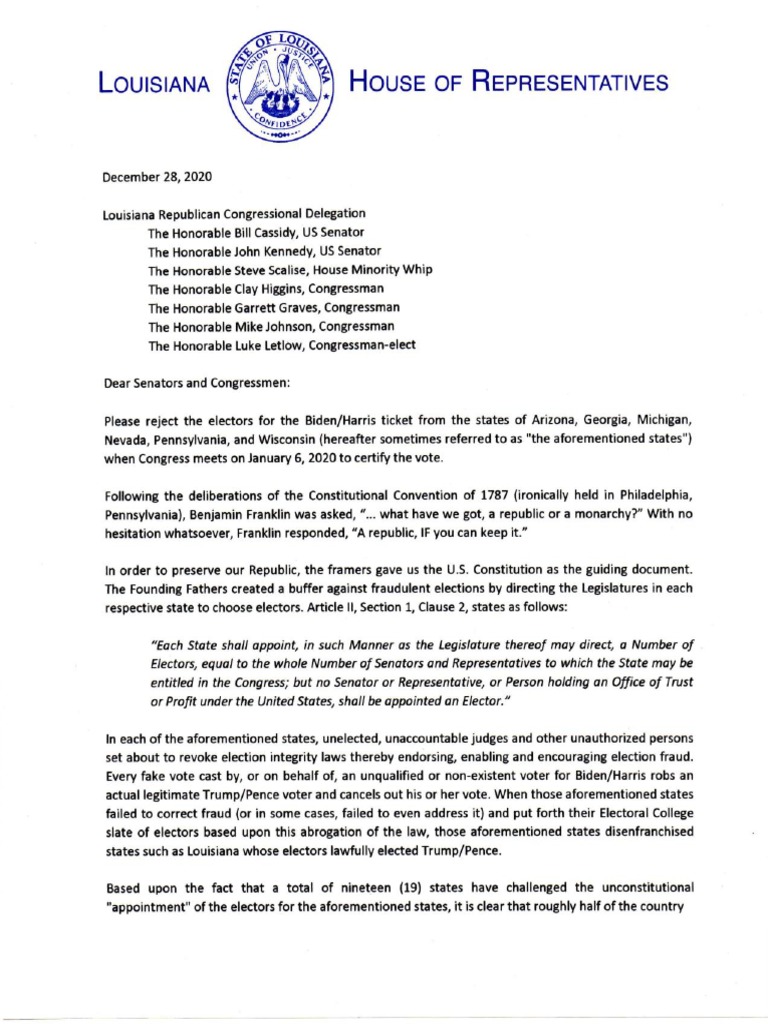 All of the claims in the letter stem from either Trump, his allies, or right-wing outlets such as OANN. But many of them haven't been brought up in court during the multitude of lawsuits filed by the Trump campaign because they don't have a backing in fact, even a tentative one.

Lawyers -- such as the president's personal attorney Rudy Guliani, for example -- are not allowed to lie in court, or say something they know to be untrue. Violations could lead to heavy fines or the lawyer being disbarred.

Congress will convene on Jan. 6 to certify the results of the election.