Police decline to cite the bus or driver, saying it was run off the road by a passing, swerving car. 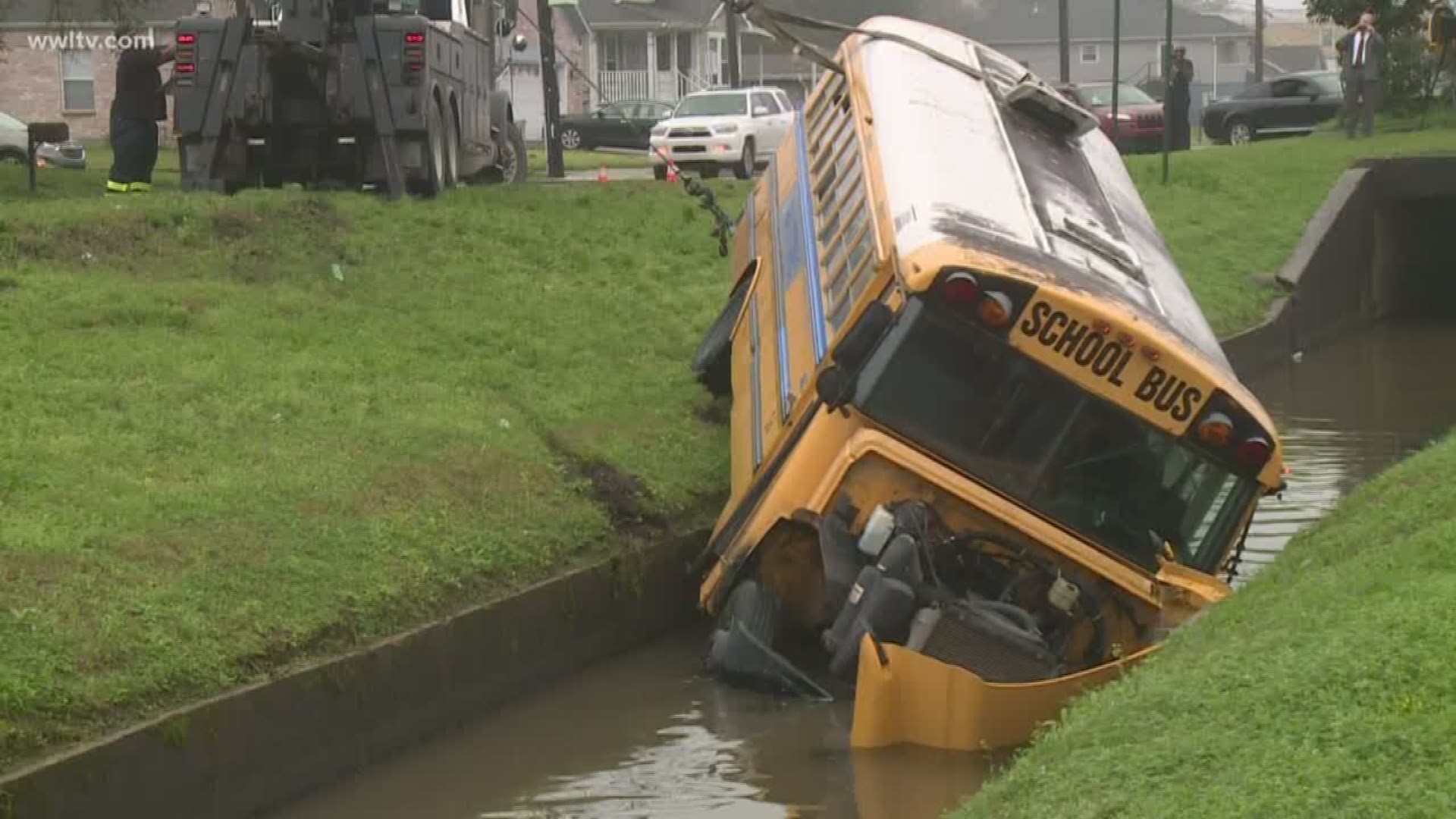 NEW ORLEANS — The latest accident involving a school bus Thursday, in which a driver allegedly lost control and drove into a canal in New Orleans East, raises new questions about the disjointed local school bus system.

The bus crashed into the canal from the eastbound side of Morrison Road at about 8 a.m. Thursday. NOPD said the driver lost control of the bus after making a U-turn when another vehicle swerved into the bus' lane, causing the driver to swerve onto the banks of the canal.

There were no children on the bus at the time and nobody was hurt in the crash, and NOPD said no citations were issued to the driver or the owner of the bus.

But the bus had Mississippi license plates and a registration sticker that expired in 2018. It also did not appear to have a brake tag, an inspection sticker required for buses serving schools in New Orleans.

A person identified as the driver of the bus by a tow truck operator did not respond to questions from WWL-TV.

The bus had only one identifying mark on it, a sign reading “CPAA Titans” along the side.

The name and style of the letters matched what’s used by Carmouche Performing Arts Academy, described on its website as an after-school music, dance, theater and visual arts program in New Orleans and Lafayette. Its marching bands and dance troupes march in several Carnival parades.

WWL-TV found the program’s facility on Earhart Boulevard, but nobody was there during school hours. Neighbors said children from schools around the city come there in the evenings to practice music and dance.

A representative for landlord Tim Norton confirmed that CPAA meets on the second floor of the building in the evenings and contacted CPAA’s founder and director, Todrick Carmouche, on his cell phone.

Carmouche, a former band leader at Eleanor McMain Secondary School, spoke to WWL-TV during that phone call. Asked about the bus crash, he said he would “research” it. He confirmed that CPAA hires a bus company from Mississippi to transport students. But when asked if he could give WWL-TV the name of the bus vendor, he could be heard asking someone, “Can I do that?” Then he said, “Hold on a second,” and after a long silence hung up.

He did not respond to further calls to that same number.

“I seen it on y’all’s news not too long ago where you were investigating these type of things: people driving (school buses) without a license, people driving without insurance. So, yeah, they need to crack down a little more, a little faster,” said one witness who did not want to be identified.

But CPAA is not a charter school, so its bus vendor likely won’t fall under new city regulations enacted this month to try to exert more control over the private bus companies. Charter schools across metro New Orleans are required by state regulations to use buses licensed and inspected in Louisiana, although area residents have spotted several buses around town with Mississippi license plates apparently driving children to charter schools in town.