$800 tip? New Orleans lady is leaving one of those a week for hard luck servers

She dines out on Mondays and talks to the server to decide if they need a boost. Several tips have ended in tears, hugs. 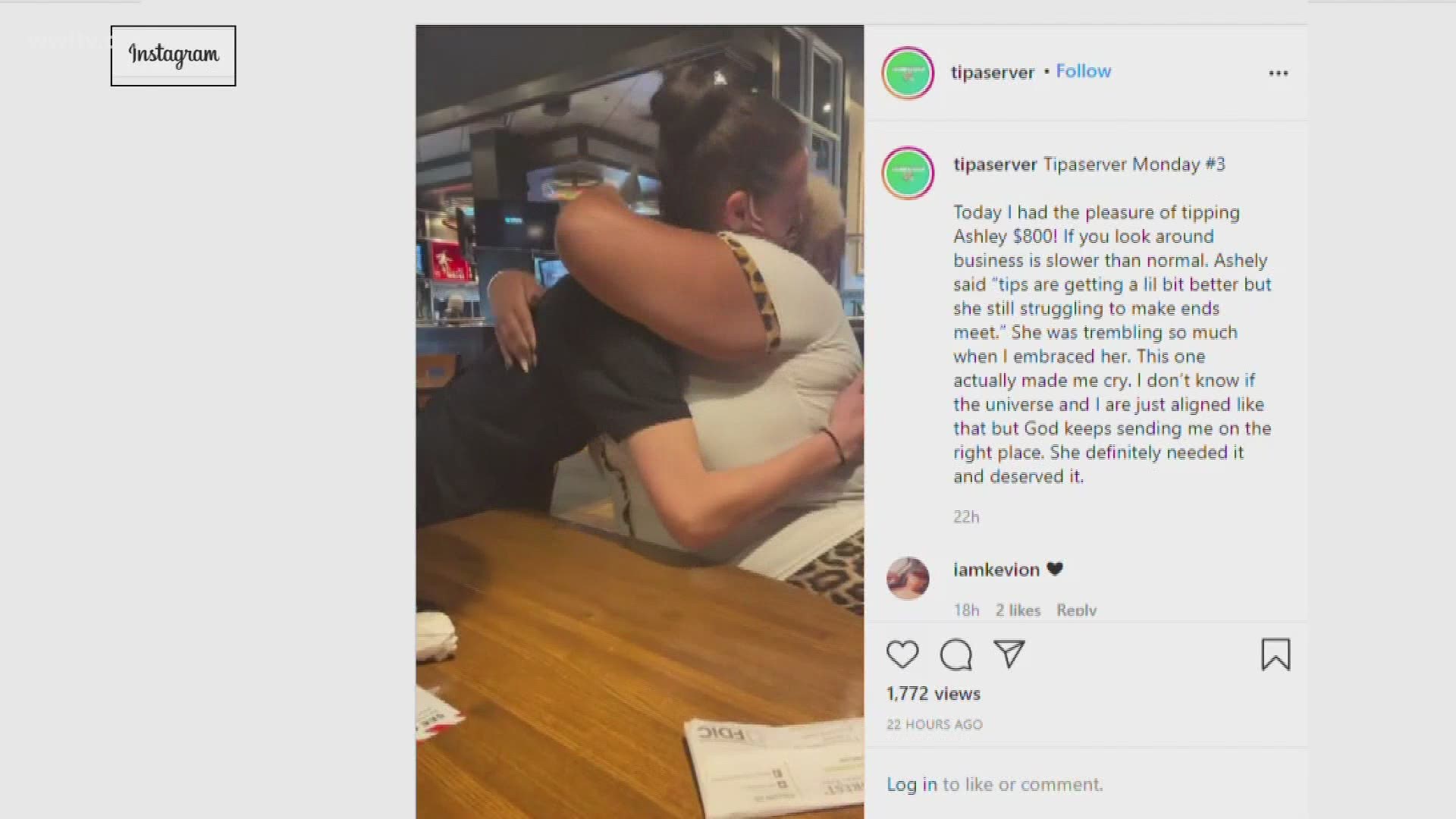 NEW ORLEANS — When was the last time you left an $800 tip at a restaurant?  For a New Orleans woman, it was Monday.

When Keyondra New finished her meal and got ready to tip her waitress, she pulled out a thick stack of cash in an envelope.

“Are you serious?” asked the waitress.

Keyondra laid out the bills and counted.

The total tip was $800.  The waitress had tears in her eyes and couldn’t embrace social distance in that moment and instead hugged Keyondra.

“I just try to get a feel for the person.  I ask them different questions.  I ask how their money is, how business is.  I ask them about their family life.  I want to see if I’m donating it to the right person,” said Keyondra.

On Instagram, where she posts these surprise tips, Keyondra goes by the handle @TipaServer.  She said the videos help spread some much-needed positivity and they’re also a way to show her donors who is getting the money. She makes regular posts of the cash app she uses to collect donations.

She also gives credit where it’s due.  Keyondra got the idea of collecting money donations and then giving it to waiters or waitresses from Deshun Brumfield who goes by the Instagram handle @ServeaServer.

“We talk and communicate all the time; we root each other, we call up each other and ask what the donations are looking like this week?” said Keyondra.

The struggles in the restaurant and hospitality industries this year have been well documented.  Keyondra said for her, months of isolation, led to frustration then inspiration.

“I was sitting home looking for a way to help.  I remember feeling lost, feeling confused, looking for a purpose,” Keyondra said.

She made her first delivery early September.  With $100 of her own money and online donations, she left a tip of $500.  She posted the video to Instagram.  Donations kept coming in.  The second week, she visited Neyow’s in Mid-City.  She was able to leave a $1,000  tip that week.

Keyondra fully understands the hardships for many workers during the pandemic.  She’s been furloughed since March.

“I was affected in a major way right?  God has been covering me, so other people probably didn’t have the same covering or the same help.  So I wanted to find a way to help,” said Keyondra.

Keyondra makes her tip deliveries on Mondays and basically leaves the amount that was donated that week.  Any left-over money will be rolled into the next drop off.  Keyondra said she always pays for her meals with her own money.

Usually, 15 or 20 percent of the bill is considered a good tip.  When the tip is 100-percent from the heart it’s a kind of generosity that goes well beyond the numbers.