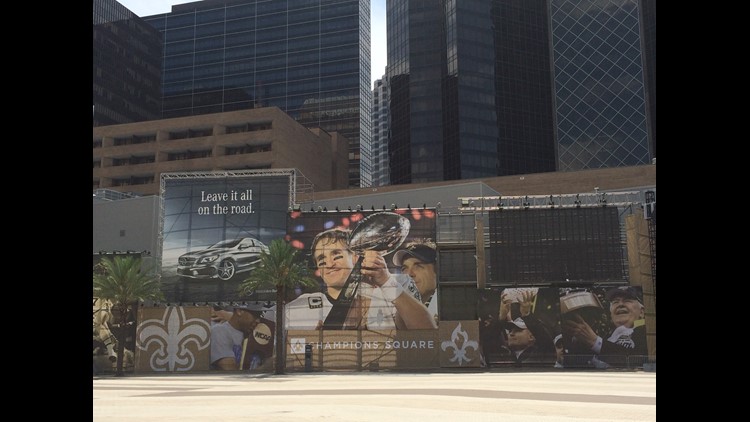 The New Orleans Saints and Pelicans announce the debut of a re-designed Champions Square.

Nine years after the State of Louisiana seized a block of LaSalle Street to build the Champions Square event venue without paying the City of New Orleans for it -- and two years after WWL-TV exposed the $3.3 million freebie -- the city still hasn’t been compensated.

The free transfer of the 1400 block of LaSalle Street was initially discovered by Jason Berry, a blogger known as American Zombie. WWL-TV investigated in April 2017 and confronted the Louisiana Stadium and Exposition District, a state agency known as the LSED, which owns and oversees the Mercedes-Benz Superdome, Smoothie King Center, Alario Center, TPC Louisiana and other venues.

At the April 20, 2017 LSED meeting, board Chairman Kyle France acknowledged the city was owed compensation for the street and promised quick action.

“I spoke to some of the key folks today, before the LSED board meeting, so I’m confident something will be done here pretty soon,” he said.

WWL-TV asked France for an update at the LSED board meeting Wednesday, May 1, 2019, and he agreed negotiations with the city have taken too long. But he said they have picked up recently.

“We recently met with the mayor,” said France, who has now discussed the issue with Mayor LaToya Cantrell and her predecessor, Mitch Landrieu. “And we’ve been going back and forth with her folks on finding an appraiser that we can both agree on.”

When she was running for mayor, Cantrell told WWL-TV that there should have been a deal done already based on the costs and benefits of the transfer.

“Surely an agreement, I would say, would need to be or should have been put in place,” Cantrell said in April 2017.

But she’s been mayor for a year now, and the hang-ups appear to be the same as they’ve always been.

“Under Mayor Cantrell’s leadership, the City of New Orleans re-urged its request to LSED to immediately compensate the City for its use of our City owned LaSalle St. property — consistent with LSED’s agreement and repeated representations to the City promising compensation in the form of a lease agreement," said City Attorney Sunni LeBeouf. "Unfortunately, to date, LSED has never compensated the City for its use of the City’s LaSalle St. property. At this time discussions are ongoing, and the City remains hopeful that LSED will honor its obligation and long standing commitment to the City of New Orleans.”

The state and city initially negotiated compensation for the street in 2010, but the LSED rejected the city’s valuation of the street, which was $3.3 million in 2016. That was less than a subsidiary of Harrah’s Casino had already paid the city in 2006 to purchase a block of Fulton Street and shut it off to vehicular traffic and develop it, as the LSED did.

France said he is “taking the bull by the horns” now, and Gov. John Bel Edwards and Cantrell want to get a deal done. But Berry said he was disappointed with the lack of progress.

“It’s just ridiculous that you pointed it out two years ago, they said they would deal with it, The Advocate did a story during the NFL Playoffs (almost five months ago) and there’s still nothing done,” Berry said. “That’s money that could be going into the Sewerage & Water Board or other infrastructure needs in this city.”

The LSED spent $17 million developing Champions Square and collects all revenues from concerts and other events there, which totaled about $4 million a year in 2017.