Ways you can avoid the flu while attending parades 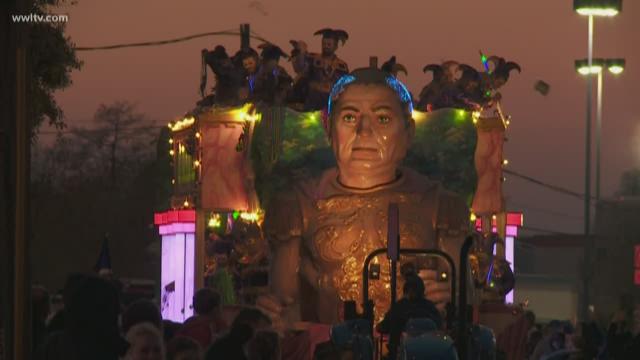 METAIRIE- The floats, the bands and the lights from the Krewe of Caesar greeted carnival lovers in Metairie Sunday night.

"We're glad that it's warmed up and he is enjoying it. He loves the music," St. Bernard Parish resident Roxanne Russell said as she was at the parade with her child.

Metairie resident Greta Jackson lives right down the block from the parade route. She decided to come out with her sons.

"When they canceled the last parade because of the rain, I told my kids we're not coming out because of the rain. But, when they told me, 'Mommie, we got a parade tonight,' I said, you know what, let's get dressed, let's go," Jackson said.

According to the Center for Disease Control, this year's flu outbreak is responsible for at least 53 child deaths.

Dr. Gatz says everyone in close proximity to one another at carnival raises your chances of catching the illness.

"Any sorts of bodily fluid, such as mucus from sneezing and coughing and people handling the beads that are thrown and whatever else that they give to the crowd will transmit that virus to other people," Dr. Gatz said.

There are some things parade goers can do to protect themselves.

"I myself always carry tissues. If not that then a handkerchief," Dr. Gatz said.

Also Gatz says if you plan on standing on the parade route, have some hand sanitizer, particularly ones with aloe.

"This will reduce, if not eliminate the virus on your hands if you should touch a surface or be contaminated in another way," Dr. Gatz said.

Jackson says spreading the flu is a scary thing, but she is not worried.