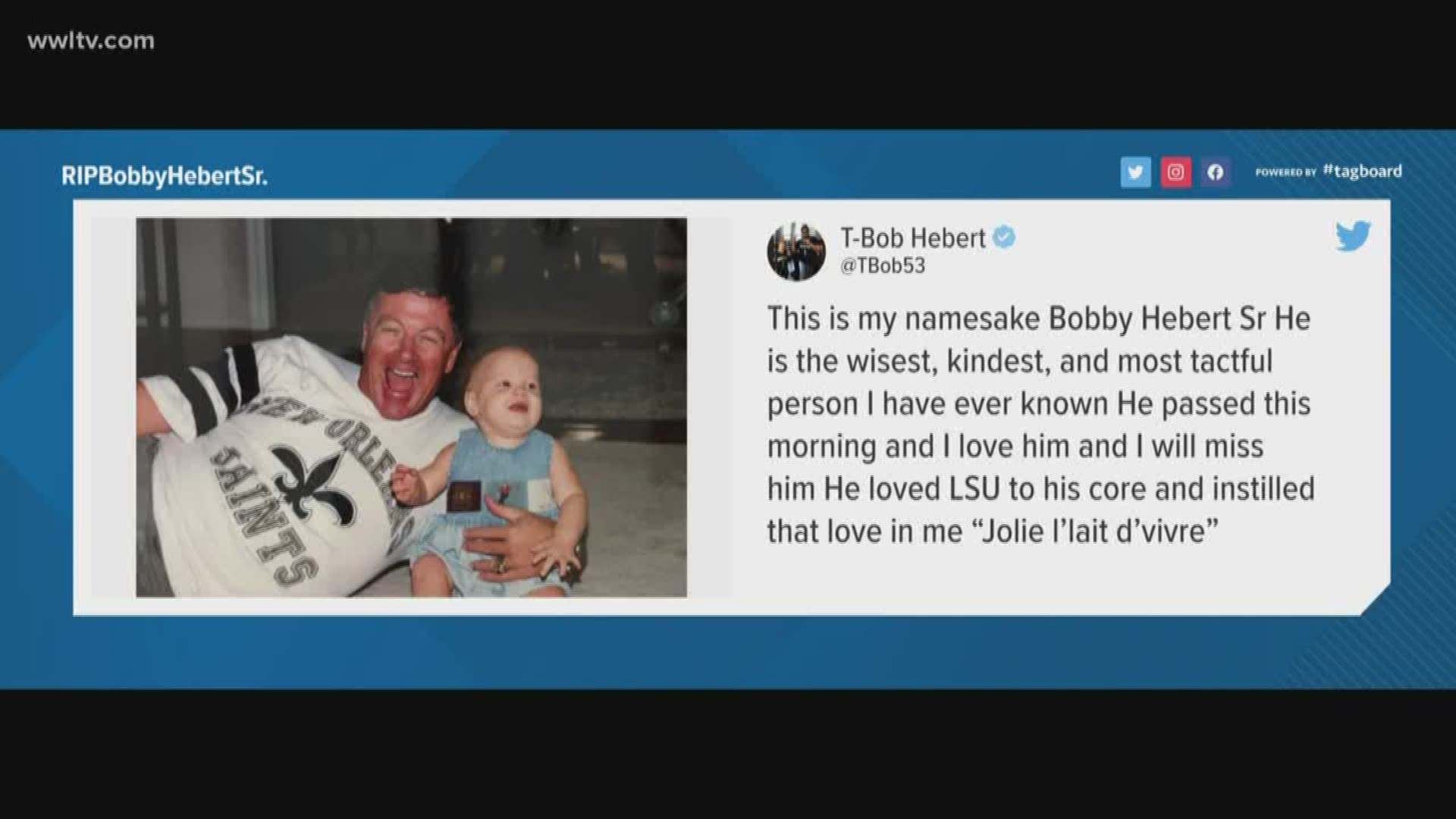 “He’s a fighter,” Hebert said to co-host Kristian Garic, before breaking down in tears. “He’s tough, but you can be tough and the virus can still overwhelm you.”

“You get numb and then you know sometimes you don’t want to accept reality, what you’re dealing with,” Hebert said. “It’s just trying times right now and we need to listen to what the doctors are saying, what the professionals are saying… because it’s an unseen enemy.”

Hebert Sr. and his wife Paula raised their family in Cut Off, Louisiana, where their son Bobby first made a name for himself as a football star for South Lafourche High School.

In the radio interview Friday, Hebert said his father was a colon cancer and stroke survivor who had also undergone open-heart surgery in the past.

In a 2014 Houma Times article, Hebert’s father recalled his son’s early days as a standout for South Lafourche Tarpons, leading the high school to a state football championship in 1977.

“When he was growing up he was always in charge. He had to be in charge. He had to be the captain of the team in the neighborhood,” said Bobby Hebert Sr. “He knew the game and he was very competitive. He wasn’t the greatest athlete, but he was competitive, and he worked hard at it…. When God gives you gifts that you didn’t know you had, you gotta take advantage of them.”

Hebert was the first Saints quarterback to take the team to the NFL playoffs in 1987. Hebert, a former USFL football star, played for the Saints from 1985 to 1992, then ended his NFL career with the Atlanta Falcons.

A member of the Saints Hall of Fame, Hebert is popularly known as the “Father of the Who Dat Nation,” for coining the phrase used to describe Saints fans. He also earned the nickname “The Cajun Cannon” for his powerful throwing arm.

“You never know what to expect in life, and I enjoyed it all,” Hebert Sr. told the Houma Times when reflecting on his son’s career. “It’s such a small world, and how many starting quarterbacks in the world? There’s only so many teams and so many players, and Bobby made it. And Bobby never forgot where he came from. He’s proud that he’s a Cajun.”

Bobby Hebert and his family released a statement Saturday through WWL Radio:

“Our hearts are broken by the passing of my father, Bobby Hebert Sr. He was a beloved husband of 61 years, devoted father of four and grandfather to eleven grandchildren and four great-grandchildren. In his later years, he traveled the world with the love of his life, Paula. He was truly one of a kind with a magic twinkle in his eye. He was loved by everyone who knew him. He never knew a stranger and was the life of any party. His Catholic faith was a pillar of his life and he went out of his way to help anyone in need-if even to make them smile. He was a Saints fan but the LSU Tigers were his life-long passion. He’d always say, ‘I hope the Saints win, but LSU has to win.’

Without my father I never would have been able to accomplish my dreams, I never would have made it to NFL. He was the reason I made it. I owe everything to him. I remember when I played in my first game with the USFL in 1983, he turned to me and said, ‘We made it.’

We are so thankful for the many wonderful years we had together, although there is never enough time. And we want to thank everyone from the bottom of our hearts for the outpouring of love and support that you have shown my family and I during this difficult time. Specifically, I want to thank the devoted nurses and doctors at Ochsner Kenner for giving my father the best care possible and for risking their lives and health every day to help keep us alive and healthy.

Bobby and Jojo Hebert and the entire Hebert family”