FINAL: Spurs beat New Orleans Pelicans 117-114 behind 32 points and 11 assists from DeMar DeRozan in his return

Six Spurs scored in double figures as they defeated the Pelicans at home. 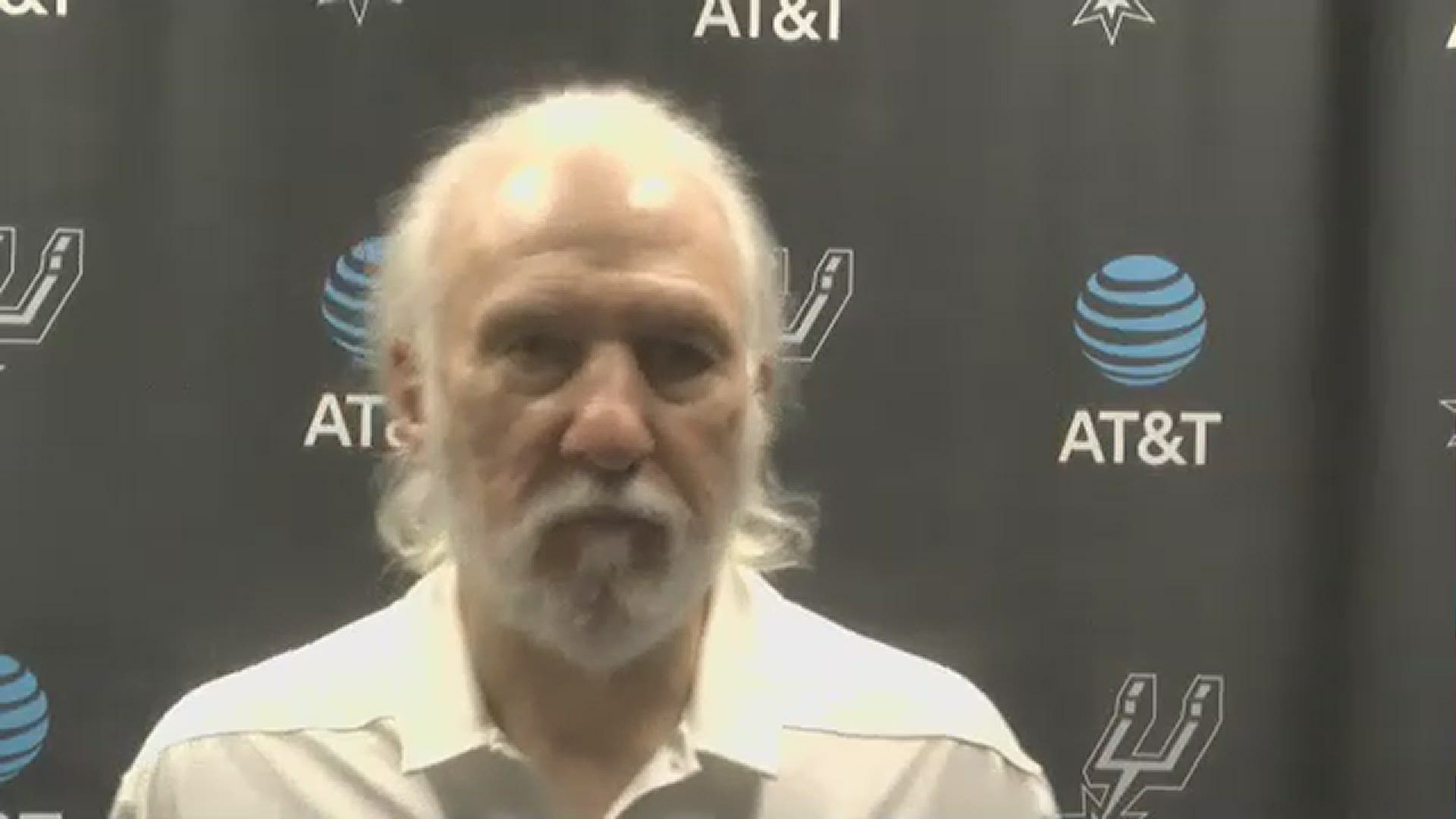 SAN ANTONIO — Before Saturday night, DeMar DeRozan's last game was two weeks earlier. On the court, many of his teammates are out due to coronavirus. Off it, he's processing the recent death of his father, Frank.

Those were the circumstances under which DeRozan scored 32 points and dished 11 assists, leading a total team effort for a 117-114 win over the New Orleans Pelicans. The teammates and coach that already said he should have been an All Star expressed their admiration after the win.

"He just showed he's a real professional, a real vet. This is his happy place, and what he was going through, I could only imagine. I talked to him for the whole time he was gone, just try to let him know that I'm here for him, the team's here for him, we're brothers at the end of the day," said Dejounte Murray, who added 18 points, 7 rebounds, 7 assists and 3 steals. "It's good to have him back." 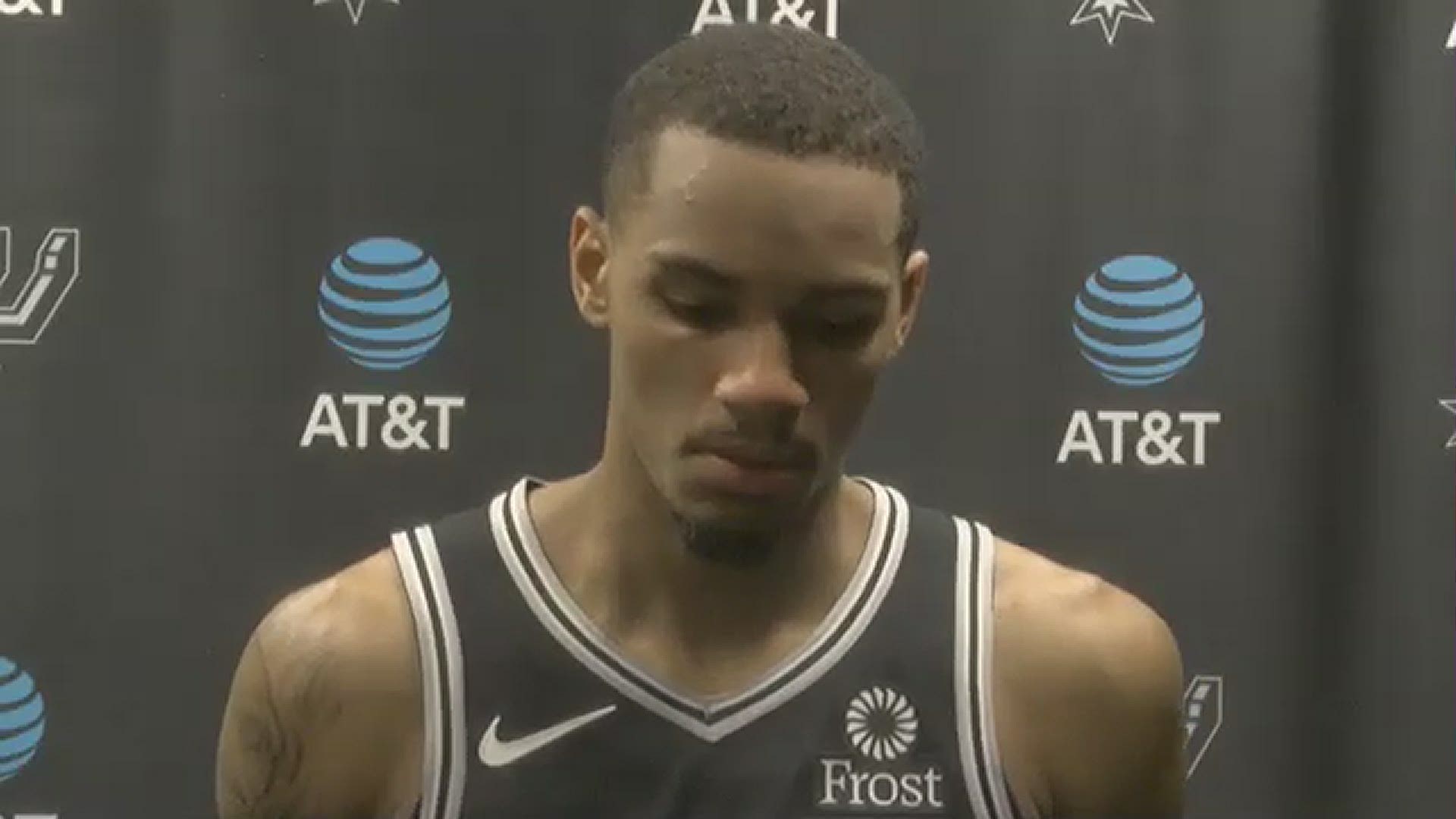 "True professional, no one will really be able to understand what he's been through over the last period of time, obviously not just the last few days, so for him to be able to do that, you just admire the guy for his abilities, and his heart, and his passion for the game," said Patty Mills, who added 13 points off the bench. "He makes a lot of people that are important to him very happy and very proud, so I'm just happy to be his teammate." 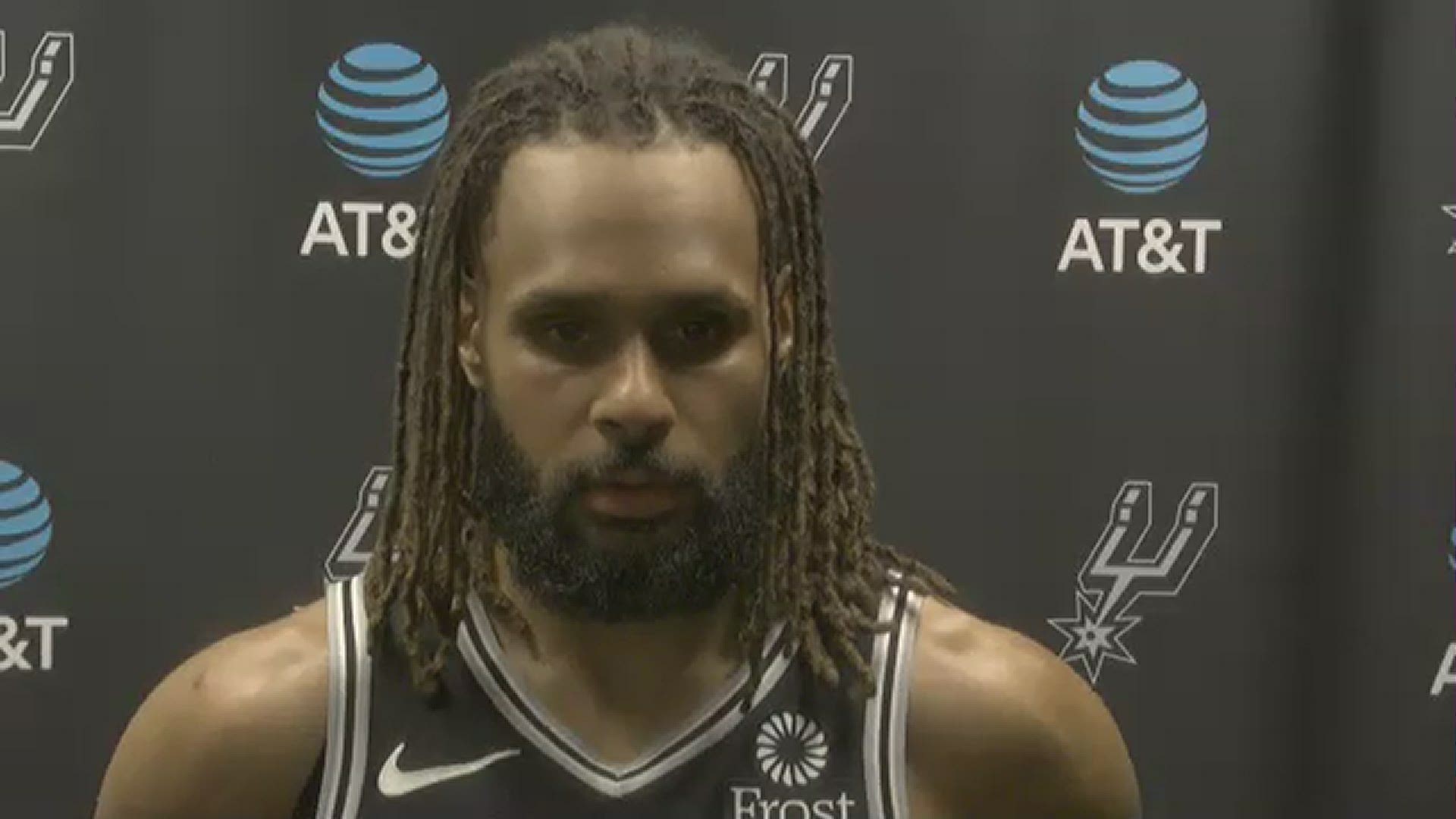 "He was spectacular, to be gone that long and not show any rust, and to be able to have the wind to play as much as he did as hard as he did," Popovich said. "There's a lot of guys that are tough to guard on that New Orleans team and he was special." 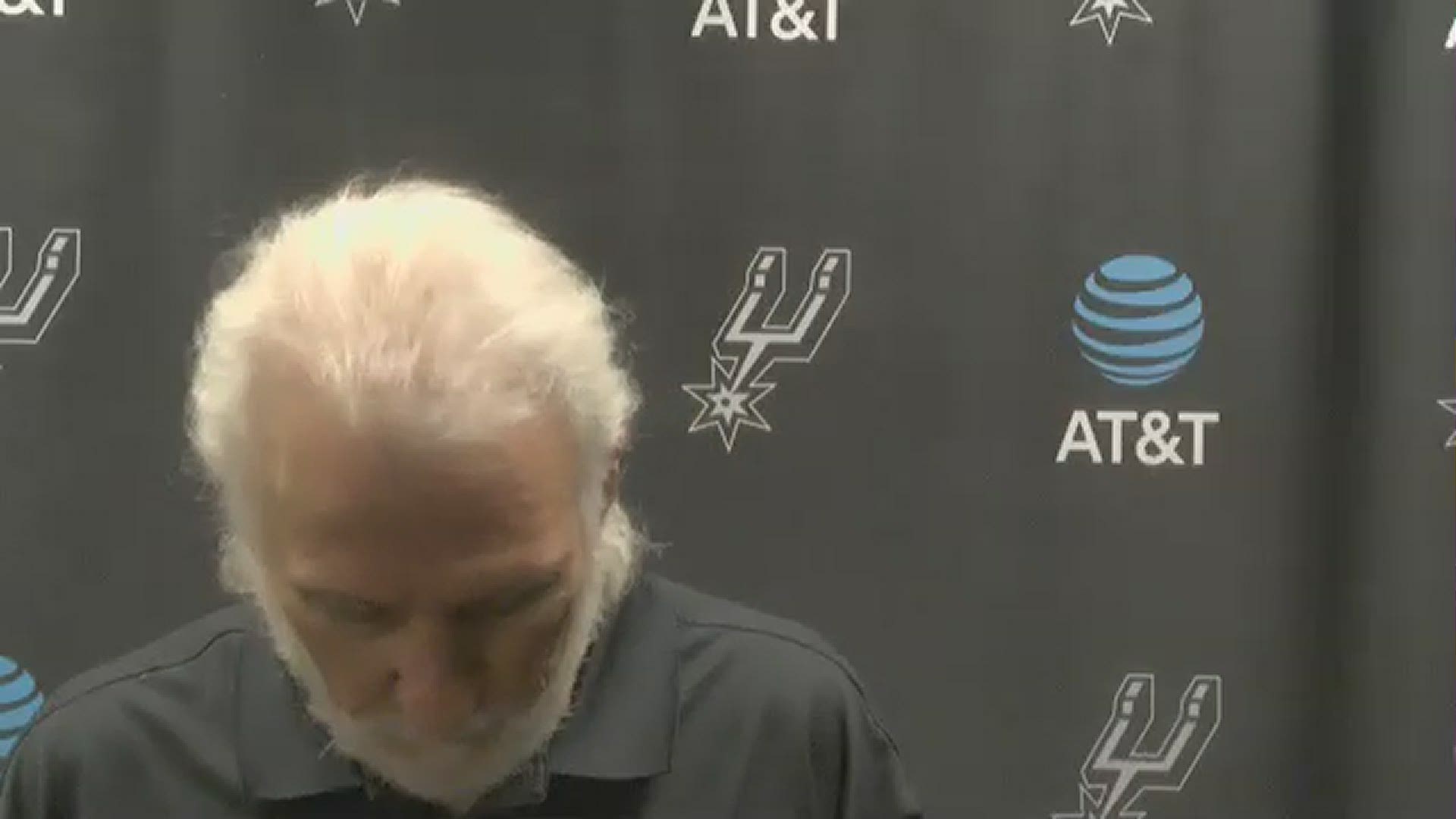 LaMarcus Aldridge played his second game off the bench, and he looked much more comfortable putting in 21 points and 5 boards. He went to work in the post, hit free throws, and that opened the rim up for him as he drilled outside jumpers.

"LA was steady, took advantage of all the situations he was put in, did a heck of a job for us," Popovich said, noting that a bunch of guys got involved. He singled out Trey Lyles and said that the guards did their job, and was happy with the defense even though Zion Williamson got a bit loose.

Trey Lyles started, and he drew the assignment of slowing the sentient 260-pound battering ram with moon shoes that is Zion.

"Just tried to make it difficult for him, he's a load down there, big dude, quick, just tried to keep him off the glass as best as I could and with the help of teammates I think we did a decent job at that." 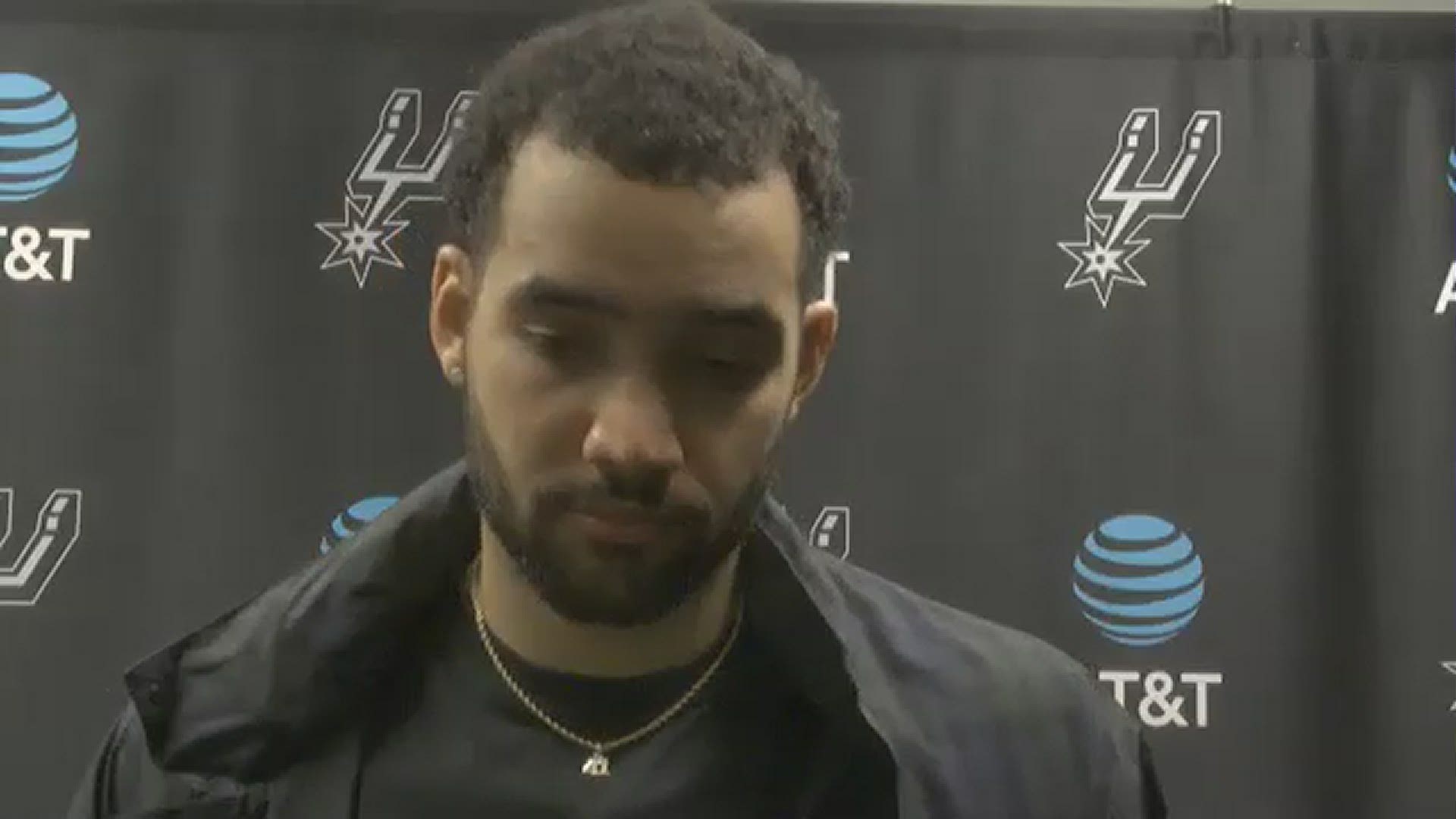 Williamson had 23 points, 15 boards and 5 assists, and Lyles might still be right because it can always be worse with that guy. Lyles finished with 7 boards and 10 points, half on triples and half from attacking closeouts.

Lonnie Walker IV added 17 points on confident shooting with solid defense, and Jakob Poeltl contributed at a high level on both ends despite just six points in the box score and trouble with soft fouls that kept him out of the game a bit too long. He grabbed 10 boards, blocked three shots, impacted many more, and set a ton of screens to free the other guys.

Luka Samanic didn't score, but grabbed five rebounds and played some impressive defense. The COVID-shortened bench has given him and others an opportunity to show what they've got.

This game was a bit of the best of both worlds for San Antonio, as the developing players got valuable reps and made meaningful contributions while the vets carried the load and propelled the team to victory.

The Spurs are now fifth in the Western Conference at 17-12, four games behind the second-seed Clippers and three games ahead of the tenth-seed Grizzlies. In a tight playoff race with a difficult second half looming, they need all the wins they can get. This was a take care of business game against a weaker opponent, and they took care of business.

LaMarcus Aldridge started the final period by driving through Zion Williamson's massive frame in the post for a layup. New Orleans scored six quick points though, and Coach Popovich called timeout up 95-89.

Aldridge got a mid-range jumper to fall, then Zion threw a lob. The pick-and-roll defense by Aldridge has been a concern this year, but he got a nice block from behind.

Jakob Poeltl came in to replace him, and immediately finished a lefty finger roll as he rolled to the hoop. DeMar DeRozan used another post move pump fake to get to the line, putting San Antonio up eight. A quick 4-0 run got NOLA back within a bucket, but DeRozan again drew a shooting foul on the drive.

Next time he posted up, missed a shot, but got fouled again. His free throws extended the lead back to seven. He drove again and looked like he'd pass it, but drew a foul and changed his mind mid-air, floating in a layup and-1.

DeMar didn’t even want to shoot this, heard the whistle and threw it uppic.twitter.com/CCreBP8xhj

The Spurs as a team went cold from three, only hitting two threes in the first 20 minutes of the second half. Patty Mills went especially cold. New Orleans got free throws on the other end, cutting their deficit to three.

LaMarcus Aldridge drove through Brandon Ingram drawing a foul, and New Orleans challenged but the call stood. The free throw contest continued until DeRozan whipped a pass down to Poeltl for a jam.

Dejounte Murray blocked a shot, then forced a jump ball. The Spurs were up five, and Poeltl made a big stop inside on Steven Adams. The next trip down though, Zion went to work and scored at the basket.

Lonzo Ball took an early corner three to tie but missed badly, and Zion sent Dejounte Murray to the free throw line where he hit one. Ball tried another quick three and missed again, and DeRozan capped the game off with an easy transition dunk to put an exclamation point on the 32-point, 11 assist performance and win.

The Spurs won 117-114 after a meaningless three at the buzzer.

Zion Williamson started the second half with his fourth and fifth offensive boards of the game, tipping both in for second-chance points and forcing a timeout.

Trey Lyles stopped the bleeding with a three after DeRozan collapsed the defense, but New Orleans scored on another offensive board. Jakob Poeltl grabbed one on the other end, and DeMar used some fancy footwork to get to the line.

Poeltl swatted a layup attempt on the other end, and DeMar converted with a post pivot for two. DeRozan picked off a save attempt by Zion, and bounced it to Lonnie Walker IV for an easy transition hammer dunk, bringing about a timeout with San Antonio up by eight.

Trey Lyles attacked decisively, driving past defenders who closed out to him. Rather then settle for in-between jumpers, he either drove all the way to the rim or made a fluid pass to a man on the wing.

DeRozan scored in close twice, then threw a cross-court to Patty Mills who pulled the trigger on a deep one that exited the frame, came down with dew drops on it and hit nothing but twine, putting San Antonio up 11.

DeMar takes it to and through Lonzo pic.twitter.com/QqYn0i1jM9

LaMarcus Aldridge posted up and got to the line again, making both. Brandon Ingram finished the period with a wonderful crossover drive and lefty layup, making it 93-83 with 12 minutes left.

San Antonio's team defense tightened up to start the second, not allowing a basket for the first few minutes and forcing a few turnovers. Dejounte Murray ripped a steal, then got out on the break, eurostepping through a defender for a layup and a foul.

Dejounte, that’s no way to treat a guest! pic.twitter.com/YKPOkG5i6T

Trey Lyles knocked down a corner three, then Lonnie Walker IV drilled his second of the game. He took a bit of a deep heat check and hit nothing but the bottom, giving him 13 points.

DeMar DeRozan put his head down and attacked the basket, driving in for multiple and-1s.

Zion Williamson was a pest on the offensive glass, bounding to the ball and putting it back in a few times.

Jakob Poeltl picked up his third soft foul of the game, sending him to the bench again.

Here is the evidence! pic.twitter.com/Kz4jVOLsPi

DeRozan and Murray continued hitting shots for San Antonio, and New Orleans never got into a rhythm from deep. The Spurs took a 67-61 lead into halftime.

DeMar DeRozan got in on the scoring, hitting a paint floater and then finding Jakob Poeltl for a pop a shot in two consecutive pick and rolls.

Poeltl started again at center, and started the game by blocking Steven Adams under the basket. He picked up two quick fouls, however, and went to the bench earlier than he would've liked to.

LaMarcus Aldridge came in, and missed his first several shots off the pine, but got to the free throw line by posting up and scored that way. Brandon Ingram went off for New Orleans, starting 6-8 from the floor with 15 points for the Pelicans.

Dejounte Murray knocked down a triple late in the shot clock, and on the other end stripped Zion Williamson, starting a transition break that he finished with a pass to Lonnie Walker IV for a layup.

Murray and Walker also showed nice chemistry on a drive and kick for a triple in the corner.

Dejounte to Lonnie for three! pic.twitter.com/1MLYj4yRRb

With a few defensive stops followed by tough layups from Murray, the Spurs tied it up at 30. Murray ran pick and pop with Aldridge, who drained a triple. San Antonio led 33-32 after a quarter.

DeMar DeRozan spent some time away from the Spurs after the passing of his father, Frank. He was out for the 102-99 loss in Oklahoma City, but will be back on the court in San Antonio to face off against the New Orleans Pelicans.

RELATED: DeMar DeRozan writes heartfelt tribute after the death of his father, Frank

San Antonio is still without five players who are in the NBA's coronavirus health and safety protocol, and the next guys up played decent defense in the previous game but struggled to score. Getting DeRozan back in the mix should help a lot.

LaMarcus Aldridge's status was up in the air due to a sore wrist, but Coach Popovich said before the game that Aldridge would play tonight. He came off the bench in the last game for the first time since he was a rookie, and that looks like the path forward for now.

Popovich said he wasn't sure when all of the players in the health and safety protocols would get back. He said some might return before the All Star break, but they wouldn't have a full squad by then.