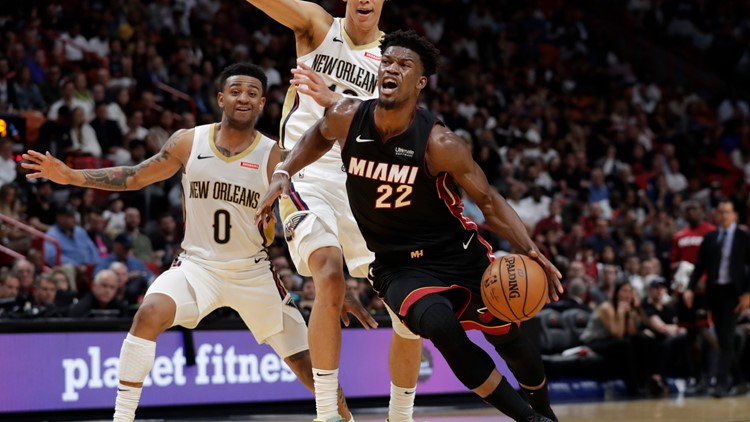 MIAMI — There were calls that Miami coach Erik Spoelstra didn’t like.

Just not many of them.

The Heat set a franchise record by fouling only six times, Jimmy Butler shook off a pregame illness to flirt with a triple-double and Miami remained unbeaten at home by beating the undermanned New Orleans Pelicans 109-95 on Saturday night.

“They let us play,” Spoelstra said. “But then if there was any slightest infraction of a step or a travel or a dribble, they called all those. But I actually liked that we didn’t let that get in the way.”

Bam Adebayo had 18 points and 14 rebounds, and Butler added 16 points, 13 assists and eight rebounds for the Heat. Miami is 5-0 at home and 9-3 overall — tying the best 12-game start in team history.

Nickell Alexander-Walker made six 3-pointers and had 27 points for New Orleans, while E’Twaun Moore scored 18 and Jrue Holiday scored 14 for the Pelicans.

New Orleans came into the game with big injury problems — and left with bigger ones. No. 1 overall pick Zion Williamson, along with JJ Redick, Jahlil Okafor, Brandon Ingram, Lonzo Ball, Josh Hart and Darius Miller all were unavailable for the game with various injuries.

And by the time the first quarter was over, starters Frank Jackson and Derrick Favors were done for the night as well. Jackson left with pain on the left side of his neck after colliding with Miami’s Meyers Leonard. Favors departed with back spasms. And that left the Pelicans with eight players for the game’s final 40 minutes.

They hung tough, but the Heat eventually pulled away.

“I thought the guys played extremely hard,” Pelicans coach Alvin Gentry said. “We just ran out of gas, to be honest with you. We just did not have enough people tonight.”

Nunn led Miami in scoring. His best play of the night might have been a pass.

The sequence in the final seconds of the third quarter went like this: Kelly Olynyk double-teamed Holiday, forcing the ball from his hands. The Pelicans turned it over a couple seconds later, and Miami’s Tyler Herro pushed the ball upcourt to Nunn near the basket.

Nunn knew he couldn’t get a shot off, so he kicked it out to Duncan Robinson for a 3-pointer that swished for a 78-65 lead as time expired.

“Just IQ,” Nunn said. “When you run the floor, know where your guys are at. And we made a great play.”

Robinson scored 15, Olynyk had 13 and Herro finished with 12 for Miami.

Heat: Miami’s previous record for fouls in a game was nine, done twice. Miami committed only one foul in the first half, a franchise low for any half and the first one-foul half in the NBA since Houston had one in the first 24 minutes against Chicago on March 27, 2018. The previous Heat low for fouls in a half was two, done on five occasions. ... The Heat played without Justise Winslow (concussion), Goran Dragic (illness), KZ Okpala (Achilles), Dion Waiters (suspended) and Derrick Jones Jr. (left hip).

There was a Duke alumni event for fans at the game Saturday night. They just didn’t get to see one on the court. With Jackson’s injury, it meant all six players from Duke on the rosters were done for the night. Williamson, Redick, Okafor, Ingram and Jackson are the Blue Devils on New Orleans’ roster, and Miami has Winslow.

Miami leads the series with the Pelicans 23-22 — including playoffs. The regular-season series is tied 19-19.

Pelicans: Host Golden State on Saturday. Including playoffs, New Orleans has lost 32 of its last 35 games against the Warriors.

Heat: Host Cleveland on Wednesday. Miami has three full off days between games, which won't occur again until Christmas week.