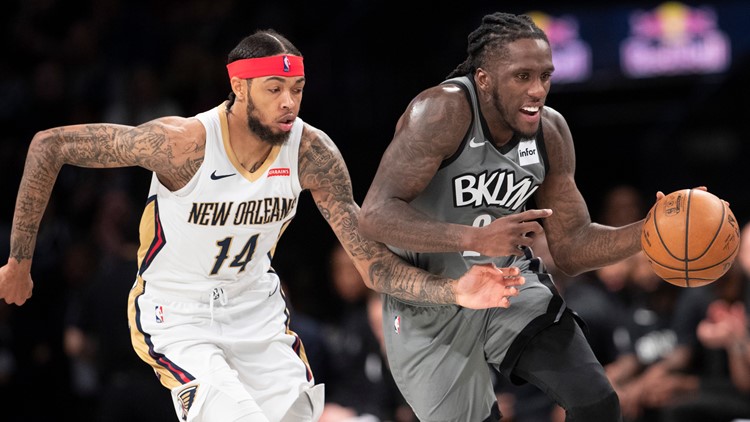 NEW YORK — Brandon Ingram had the best game of his career. The New Orleans Pelicans had the best quarter in their history.

Somehow, the Brooklyn Nets found a way to win on a night when the hits kept on coming.

"We took a combination, a haymaker, however you want to call it, couple left hooks in the jaw in the third quarter, and I thought in the fourth quarter we did a better job and slowed them down a little," Nets coach Kenny Atkinson said.

Kyrie Irving had 39 points and nine assists, and Brooklyn withstood Ingram's career-high 40 points to beat the Pelicans 135-125 on Monday.

The Nets had 67 points at halftime and a 20-point lead in the third quarter, but could never get comfortable until the final minute as Ingram kept coming at them.

He shot 17 for 24 from the field in his first 40-point game and the Pelicans scored a franchise-record 48 points in the third quarter. They got within two in the fourth but could never get enough stops to catch the Nets.

Caris LeVert added 23 points, Joe Harris had 19 and Jarrett Allen finished with 18 points and 10 rebounds for the Nets, who follow this game with a five-game road trip, their longest of the season, with the first four in the West.

"We obviously wanted to come out and win this game and really put a statement down for the rest of the week before we go on this long trip, so it was good," Irving said.

Jrue Holiday and Lonzo Ball each scored 15 points and Josh Hart had 14 for the Pelicans, who fell to 1-6.

Brooklyn led by only two after Ingram's three-point play with 4:58 remaining in the half, but the Nets scored 10 straight. Five of them came in one trip when Allen made two free throws after being flagrantly fouled by Ingram — he actually made the shot while being thrown to the ground, but the foul had been called on the floor — and Garrett Temple made a 3-pointer after Brooklyn retained possession.

Brooklyn later got consecutive jumpers by Irving and a dunk from Spencer Dinwiddie to close a 20-3 run and make it 63-44.

Irving scored 18 points in the third but the Pelicans were a sizzling 8 for 11 from 3-point range and scored 48 points, trimming a 20-point deficit to 104-98 heading to the fourth.

"We decided to play 20 minutes in a 48-minute game and that doesn't work out. At least it hasn't in the 31 years I've been in the NBA," Pelicans coach Alvin Gentry said.

Pelicans: Their previous best was 47 points in a quarter, and their best third quarter was 41 points. ... Ingram played just 13 minutes in his previous game against Oklahoma City on Saturday because of a head injury.

Nets: DeAndre Jordan limped off early in the fourth quarter with a sprained left ankle after appearing to step on JJ Redick's foot while running down the court. ... Irving has scored at least 20 points in all seven games. The longest streak of 20-point games to open a season by a Nets player belongs to Richard Jefferson, who did it in eight straight in 2007-08.

Fourth-ranked Duke practiced at the Nets' training facility Monday ahead of its game Tuesday night at Madison Square Garden against No. 3 Kansas in the Champions Classic. No. 1 Michigan State and No. 2 Kentucky also meet in the marquee early season doubleheader. The Nets held training camp at Duke under former general manager Billy King, who played for the Blue Devils.

Atkinson said he was happy for Jahlil Okafor, now starting at center for New Orleans. The No. 3 pick in the 2015 draft spent part of a season with Brooklyn in 2017-18 after falling out of the rotation in Philadelphia.

"Ultimate professional. Wonderful spirit. Worked his tail off, so I'm really happy for him," Atkinson said. "I think he fits with New Orleans and I think he's a young player who's starting to really get his footing in this league."