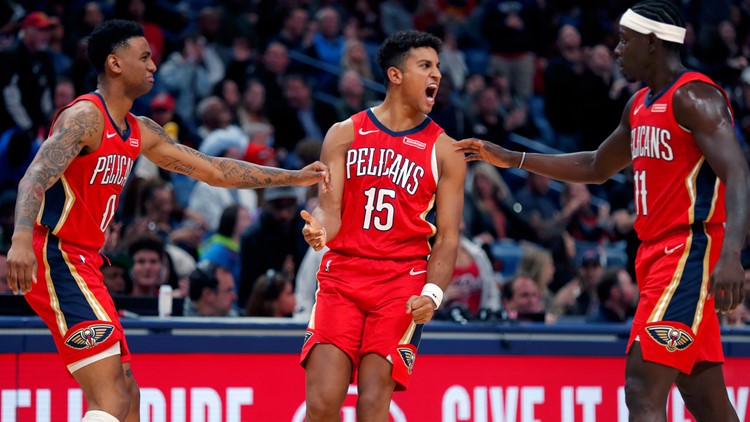 Pelicans defeat Nuggets for their first win of season

NEW ORLEANS — The New Orleans Pelicans' matchup against Nikola Jokic and the Denver Nuggets looked troublesome on paper, yet a stunning performance by Jahlil Okafor lifted the Pelicans to their first win of the young season.

The Pelicans' defensive performance — particularly against Jokic, the reigning first-team All-NBA center — helped them end their early-season struggles in which they allowed at least 123 points in each of the first four games.

"More so than anything, I thought we were locked in defensively," New Orleans coach Alvin Gentry said. "I thought we did a really good job, especially on Jokic."

Jokic finished with 13 points, six assists and six rebounds for a Nuggets team that has now lost two straight after a 3-0 start.

"I thought our starting group struggled; I thought they were low energy," Nuggets coach Mike Malone said. "We were lucky to be down by four at halftime, and they come out and punch us in the mouth to start that third quarter. I thought tonight was a disappointing, embarrassing effort."

Okafor scored 20 points in the second half, and the fifth-year center went to the free-throw line a career-high 13 times, making 10.

Ingram has scored at least 22 points in each of his first five games for New Orleans after coming over from the Los Angeles Lakers.

The Pelicans led the final three quarters. They made four of their first five shots in the third quarter to take a 10-point lead, and Denver struggled to recover.

New Orleans' best defensive performance of the season came after a listless wire-to-wire loss to the Golden State Warriors on Monday.

"We got killed the other day in film after that bad performance against Golden State, but it was necessary," Okafor said. "It was much needed, and we were able to fix the things that we talked about."

Jrue Holiday added 19 points and seven assists after missing the previous two games because of a sprained left knee sprain. Frank Jackson had 21 points on 8-of-10 shooting, and Gentry said Jackson's improvement is a related to his offseason workouts with Holiday.

"He seems to get better the more time he spends around Jrue," Gentry said.

Michael Porter Jr. led the Nuggets with 15 points in his NBA debut. Jamal Murray and Jerami Grant each had 14 points.

New Orleans benefited from improved shot selection. The Pelicans attempted at least 41 3-pointers in each of their first four games, but they reduced that to 33 on Thursday and made a season-high 46%. New Orleans shot 53% overall from the field.

The divide in long-range shooting was crucial, but Okafor's aggressiveness helped the Pelicans win the battle down low, too.

"I think that tonight kind of showed people that he can go against anybody, and he can handle himself," Holiday said of Okafor.

Nuggets: Porter, the 14th overall pick in 2018, missed last season after undergoing back surgery and did not appear in the first four games this season. ... Paul Millsap and Mason Plumlee each scored 10 points. ... Will Barton (left toe soreness) did not play. Torrey Craig started in his place.

"You can give all the transition defense rules that you want. To me, transition defense boils down to one thing — effort," Malone said. "Get back. You can tell them. You can lead a horse to water — whatever analogy you want to use. We did not get back."

Denver's starters scored just 48 points while the bench contributed the other 59.

"I thought guys off the bench played hard, gave effort," Malone said. "We gotta find ways to get our starters to play the same way because they're not playing like that right now, they're just not."

Pelicans: At Oklahoma City on Saturday.

Nuggets: At Orlando on Saturday night.