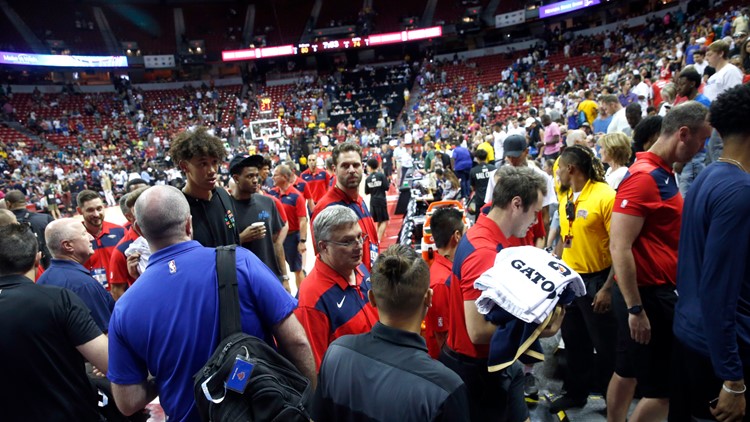 Photo by: AP
Players and staff leave the court after an earthquake during an NBA summer league basketball game between the New York Knicks and the New Orleans Pelicans on Friday, July 5, 2019, in Las Vegas. (AP Photo/Steve Marcus)

LAS VEGAS — The NBA Summer League game between the New York Knicks and the New Orleans Pelicans has been postponed because of an earthquake.

Preliminary estimates by the U.S. Geological Survey say a 7.1 magnitude quake hit in Southern California on Friday night, and it was felt all the way in Las Vegas. The overhead scoreboard at the Thomas & Mack Center was swaying, and officials elected to delay the game and have the teams leave the floor while gauging if it was safe to continue.

Games in UNLV's other gym, the Cox Pavilion, could continue because that gym lacks an overhead scoreboard.

New Orleans led New York 80-74 with 7:53 remaining. Many fans began leaving just as the quake hit, and more departed when the delay was announced. The NBA says it is working to determine if the game will continue Saturday.