"We didn't play our best game today, but I knew this day was going to come, and I'm proud of our defense," coach Ed Orgeron said. 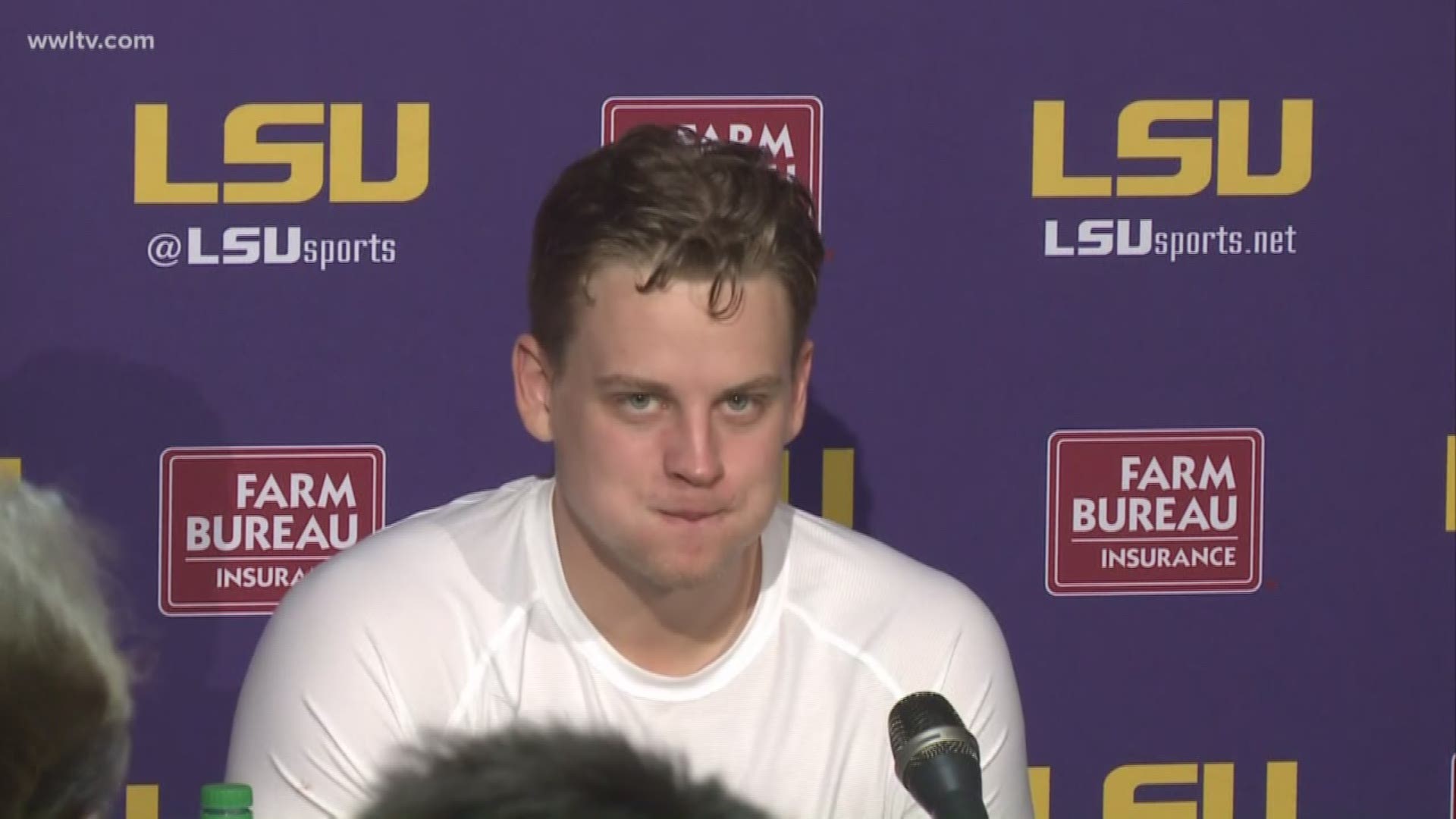 STARKVILLE, Miss — Joe Burrow didn't necessarily show his best side Saturday. While being dragged to the ground by his pants during his third sack of the game, the LSU quarterback's rear end was briefly exposed.

"I heard there was supposed to be a full moon in Starkville tonight," Burrow joked.

The rest of his performance was anything but obscene. Burrow threw for 327 yards and four touchdowns to break the LSU season record with 29 in the No. 2 Tigers' 36-13 victory over Mississippi State.

"It's a testament to him, the receivers, the offensive line, the coaches," LSU coach Ed Orgeron said. "But we're just getting started. Our team is not satisfied."

In his postgame comments, Burrows placed himself squarely in that category.

"If we play like this next week (versus No. 11 Auburn), we'll lose," Burrow said. "I think we're going to have to execute much better in the red zone than we did this week, because I don't think we'll get as many chances."

On paper, it's hard to find fault in the final results. LSU (7-0, 3-0 Southeastern Conference) had 415 yards of total offense and averaged 6.9 yards per play. The Tigers forced three turnovers, including a momentum-shifting interception right before half.

But Mississippi State (3-4, 1-3) regularly confounded the Tigers on third down. LSU struggled to find its rhythm on offense in the first half and was forced to settle for field goals on its first three drives.

"We didn't play our best game today, but I knew this day was going to come, and I'm proud of our defense," Orgeron said. "Your offense is not going to play great, on fire every week."

Still, the Tigers managed to score points on every drive of the first half and led 22-7 at the break. A pair of third-quarter touchdowns sealed the win.

"We just started off slow," Burrows said. "We didn't execute, and I didn't feel as much energy before the game. Early this morning you could tell that people weren't quite as locked in as they had been. But it's still good to get an SEC win."

"It just shows the amount of work we put in over the off season," Burrows said.

Mississippi State freshman Garrett Shrader threw for 238 yards and a touchdown with two interceptions. He also rushed for 66 yards and another touchdown. Kylin Hill, the SEC's No. 2 rusher, had only 34 yards and was held below 100 yards for the third straight game. Mississippi State had 13 penalties for 109 yards.

"When the margin for error is invisible, you can't turn the ball over three times against a team this good and expect to win," Bulldogs coach Joe Moorhead said. "And certainly those 13 penalties, some of that pre-snap stuff, it may not be on the front of it, but it's going to help get you beat against a team like this."

LSU: Even in a hostile conference road environment, the Tigers kept right on doing the same things they've done all season: scoring points and shutting down opposing offenses. This team has all the pieces to compete in Atlanta and beyond.

MSU: The Bulldogs looked as good on defense as they have at any point this season, but the math for bowl eligibility continues to get tougher for second-year head coach Joe Moorhead