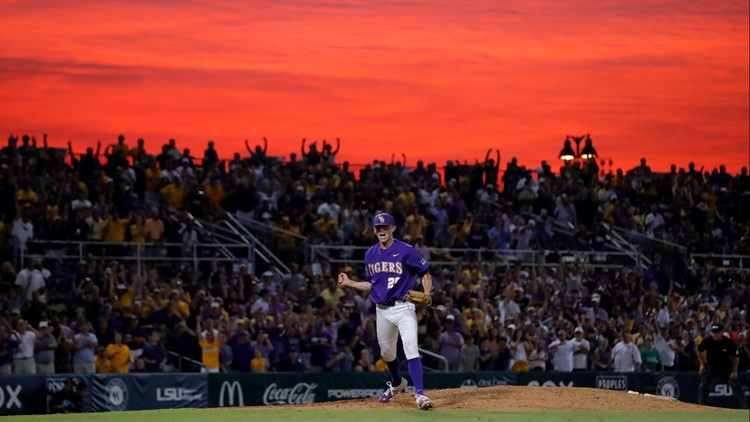 BATON ROUGE, La. — Florida State's 75-year-old head coach, Mike Martin, was in pain and enjoying every moment of it.

A celebratory bear hug from trainer Brandon Stone felt like it "had broken five of my ribs," said Martin, who'll finish his 40th and likely final season at the College World Series in Omaha, Nebraska.

Drew Mendoza's two-out hit to right center drove home Mike Salvatore from second base in the bottom of the 12th inning, lifting Florida State to a 5-4 victory over LSU that gave the Seminoles a sweep of the best-of-three Baton Rouge NCAA super regional on Sunday night.

"I ain't going to get all teary eyed, but I wanted this so bad for our young men," said Martin, who has insisted he'll retire after this season. If so, he'll conclude his career with his 17th trip to the College World Series as a head coach.

LSU (40-26) had rallied from a 4-1 deficit in the sixth to tie it in the eighth. Tigers reliever Devin Fontenot (5-4) pitched six no-hit innings and struck out 10 before Salvatore broke through for Florida State's first hit since the fourth inning. Salvatore advanced to second on a passed ball and, after Fontenot recorded his 11th strikeout against Reese Albert, LSU elected to pitch to Mendoza — one of the Seminoles' most productive hitters — with first base open.

LSU coach Paul Mainieri said he preferred to pitch to Mendoza over the following batter, Robby Martin, who came in with a team-leading .338 batting average.

But Mendoza delivered with his second hit of the game, the Seminoles (41-21) spilled onto the field and Stone exuberantly wrapped his arms around Martin.

"He hugged me and I'm saying, 'That's what this is all about,'" Martin said. "Those are things you just will never forget. This night will be etched in stone with me for the rest of my life."

Florida State reliever Antonio Velez (5-2) pitched 4 2/3 shutout innings in relief and struck out six to pick up his second win of the best-of-three Baton Rouge super regional after his inning of relief earned him the Game 1 win a day earlier.

"It was a huge, huge situation for him to show what he's all about," Martin said. "He has proven that no situation is too big for him. He doesn't care if you put him in thee bases loaded on a 2-0 count."

The Tigers ran themselves out of potential run-scoring chances twice in the game. Giovanni DiGiacomo was picked off of third by catcher Matheu Nelson with one out and the tying runners in scoring position in a 4-2 game in the sixth. After Zach Watson delivered a game-tying, one-out single in the eighth, he was cut down trying to take second on the throw back to the infield, and LSU wound up stranding a runner at third.

Salvatore produced three hits and drove in a run before scoring the game-winner.

Antoine Duplantis, who last week became LSU's all-time hits leader, had four hits in his final college game and drove in three runs, including a home run down the right field line that cut LSU's deficit to 3-1 in the fourth.

Florida State scored the game's first run on a disputed play in which the ball squirted out of LSU catcher Saul Garza's glove as he swung his arm upward after appearing to tag Martin out at the plate. Umpire Tony Norris initially called Martin out, but the call was reversed after he consulted the rest of the umpiring crew and reviewed video replay.

The Seminoles capitalized further by scoring twice more in the frame on singles by Nelson and Salvatore.

Florida State made it 4-1 in the fourth when Tim Becker's double over third base drove in Nelson, who'd advanced to second on a wild pitch.

Duplantis singled in a run in the sixth and LSU tied it in the eighth with a rally that opened with Josh Smith's double, followed by Duplantis' double that scored Smith and drove starter CJ Van Eyk from the game. Watson drove in Duplantis to make it 4-4.