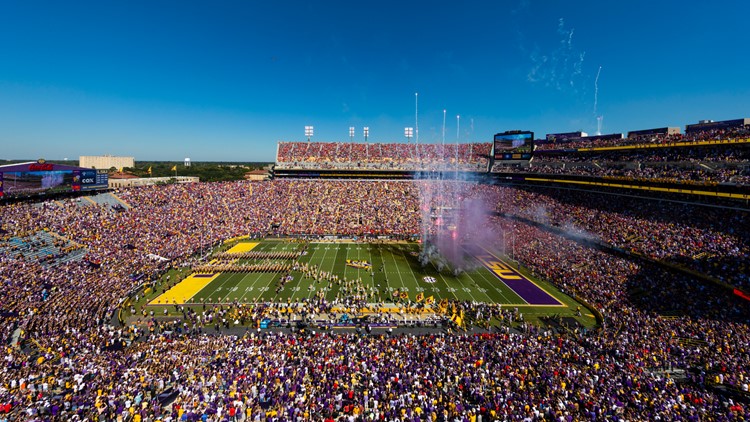 Photo by: ASSOCIATED PRESS
General view of the interior of Tiger Stadium from an elevated position during player introduction before an NCAA football game against the Georgia Bulldogs and the LSU Tigers on Saturday, Oct. 13, 2018 in Baton Rogue, LA. (Ric Tapia via AP)

LSU Athletics announced the new alcohol beverage policy Thursday morning. Starting in the fall of 2019, beer and wine sales will be available to purchase for fans ages 21 and older at most concession stands inside the stadium.

Alcoholic beverages will only be sold in the first three-quarters of the football games.

The announcement comes after the Southeastern Conference adopted new policies that allowed the sale of beer and wine at athletic venues with some conditions. The SEC's policy requires beverages to be served in a cup and no more than two beverages can be purchased at one time. A valid ID must also be shown for each purchase.

Chancellors and school presidents approved the revised rules — the vote wasn't unanimous — during the conference's annual spring meetings. The changes are expected to enhance events and create a new revenue stream at a time when schools are spending more on coaches, improving facilities and preparing for the possibility of having to pay players.

The SEC's 14 schools were previously prohibited from selling alcohol in public areas at venues, a stance that reflected the South's conservative ways.

“This is all about enhancing the fan experience, responding to the feedback from our fans and doing it responsibly,” LSU Athletic Director Scott Woodward said. “It’s a big addition to our events and we believe it will be a positive one overall, but we are going about it with the appropriate mindset and thorough planning.”

The concession stand nearest to the student section will not sell beer and wine. LSU will also reserve limited concession stands for volunteer groups that do not want to sell alcohol beverages.

Some studies, however, show alcohol sales reduce the number of alcohol-related incidents at sporting events because they cut down on the amount of binge drinking before games.

"People who have introduced it have not gone up in flames," Florida athletic director Scott Stricklin said. "So maybe it's not as dangerous as once thought."

Schools outside the SEC have been selling alcohol for years, and the results show an economic boon. Texas reportedly grossed $5 million from alcohol sales during the 2015 and 2016 seasons.

Stadium personnel and law enforcement will monitor fan behavior. Ejection without refund, arrest, or refusal of sale or consumption of alcohol could result for reasons not limited to: