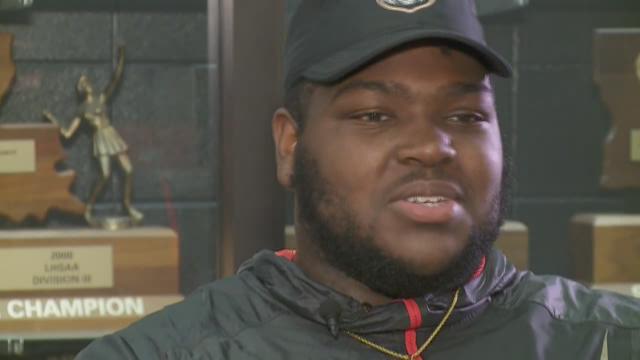 Tyler Shelvin is the big man on campus, literally! Wednesday the defensive tackle will sign with LSU.

Coach Orgeron was the first person to offer Shelvin a scholarship, so it's only fitting he's now the tiger's head coach. Shelvin refers to Orgeron as a second dad. And it's an added bonus that Pete Jenkins is LSU's defensive line coach. A guy who's sent over 50 players to the NFL. Shelvin certainly wants to play on Sundays.

Shelvin went to a camp at LSU his freshman year and was mesmerized by the display dedicated to Glenn Dorsey at the football facility. He was so inspired he changed his jersey number to 72. He's off to a good start. LSU has big exceptions for the big man. They want him to start immediately.

Still, Shelvin has to drop some weight. He's 6'3", 365 pounds. LSU wants him to weigh in at under 330. Tyler has a trainer now and his goal is to shed the pounds before he reports to Baton Rouge in June.

The big man will have some guidance along the way. His grandmother Debra, who he's very close with, wants to make sure her grandson makes a successful transition from high school to college so she planning on joining Tyler at LSU this summer to start working on a masters degree.