'LSU is not a safe place for women at such a young, vulnerable age,' says alleged sex abuse survivor 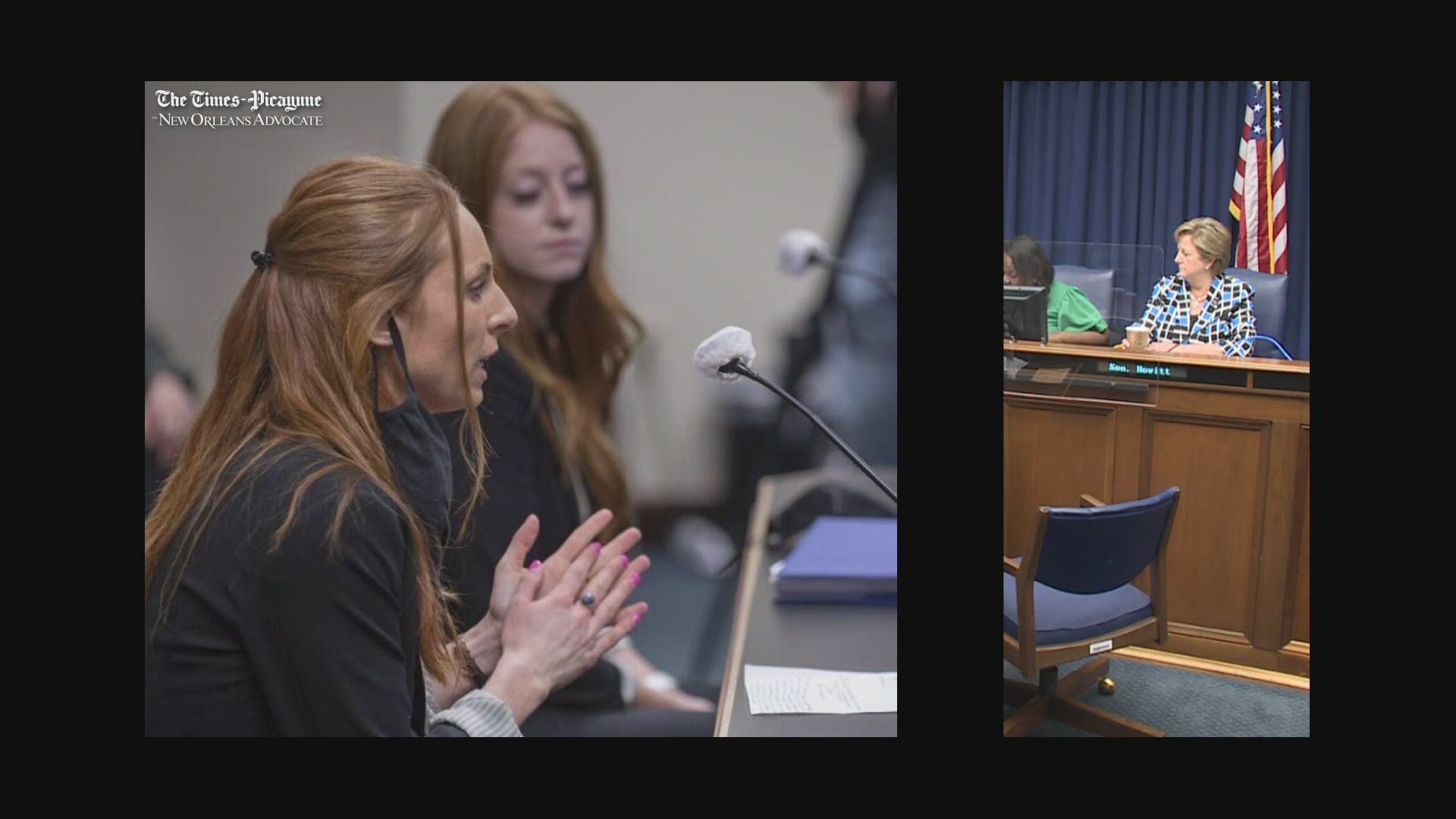 NEW ORLEANS — Two women drawn to LSU by sports -- one, an athlete, the other, an aspiring sports agent who interned in the football recruitment office -- both lived in the same apartment complex and went to LSU at the same time.

Now, both are plaintiffs in a lawsuit alleging they and others survived sexual assaults or other sex crimes that LSU ignored to protect its money-making athletic programs.

One they say involved the same man who was treated like a hero at LSU.
Derrius Guice was first publicly accused of rape at LSU in a report from USAToday.

Guice has not been arrested or charged for any alleged crimes at LSU.

“Just to have that word rape associated with my name makes me cringe, bro,” Guice said in a video posted on Twitter. Guice says the sex he had during his time at LSU was consensual.

Survivors of alleged sexual abuse almost always seek refuge in the cloak of anonymity, but Sam Brennan and Abby Owens testified before state lawmakers knowing the potential backlash for accusing a homegrown star and the university they say protected him.

“That’s the reason I’ve spoken up this whole time because Derrius Guice is still freely walking and because LSU is not a safe place for women at such a young, vulnerable age,” Abby said.

Sam tracked down Abby last year after reading about her alleged rape in USA Today.

“I remember texting her because I was like, is it just me or do we look a lot alike? She’s like, ‘no, we look like sisters.’ It’s terrifying,” Sam said.

Each says they met Guice at a bar in Tigerland. Both say they were already intoxicated when they met him and near black out drunk when they left with him.

“Kind of star struck and I remember him telling me that he knew who I was because, I mean, I was a student athlete and I was like ‘oh, that’s kind of cool,” Abby said.

“I ran into my friend,” Sam remembered. “He introduced me to Darrius … I was a little star struck I guess. I had never really met anybody famous.”

“I remember he kept, like, buying me shots of Patron,” Abby said.

“He bought me a shot and then the bar was closing and we had to go,” Sam said.

“I was in the passenger seat and I kind of came to for a second because he was going like, 80 mph down this road,” Abby said.

In both cases, what happened next is a blur. Their memories are fogged by alcohol and emotional trauma, but they both say Derrius Guice came to their apartments.

'There's a naked photo of you going around the football team'

“I woke up completely naked,” Sam Brennan said. “And then I walked out of my bedroom and into my living room and everything was super disheveled.”

Guice says he never went to anyone else’s house.

“Whenever I slept with them, they were at my place,” he said. “I never even went to anyone’s house, let alone a female’s house. They all came to me.”

But a text message suggests otherwise. Sam says Guice contacted her the next morning looking for his wallet.

“It was stuck between my couch cushions,” Sam said. “It had his license in it.”

The alleged text from Guice goes on to tell her he was in her apartment. She responds she was too drunk to remember.

She doesn’t accuse him of anything at first, but according to the lawsuit, all that soon changed.

“And so this girl pulled me aside,” Sam said. “I was like, ‘hey,’ and she just told me point blank, ‘Hey, there’s a naked photo of you going around the football team.’”

In her lawsuit, her co-worker told her to tell their boss, who then brought in Miriam Segar, the then-assistant athletic director. Segar encouraged Sam to tell LSU police, where the officer surprised her.

“If I’m coming in and taking down a big star in my first couple of months, I just feel like that would be a career ender,” Sam said.

She did, however, want to document what happened and warn the school about Guice’s behavior. Thirteen days later, Abby would meet Darrius at the bar.

‘Please notice that I'm not OK’

When asked if it was obvious that she was drunk that night, Abby said “Absolutely.”

“Like, there’s a photo of me laying on or sitting on the ground in a parking lot with a stray dog,” she said.

She said Derrius took her home and then texted her.

“All I remember reading was like, he asked to come over and I said sure, but nothing’s going to happen,” Abby said. “You know, I don’t even remember him getting into my apartment.”

Abby says the alcohol may have started to wear off during the night, because she has brief flashes of what happened in her apartment. In her lawsuit, Abby clearly states that she was raped.

Abby says that she was too drunk to give consent.

Unlike Sam, however, Abby didn’t tell authorities. She would ultimately tell her therapist and her father after leaving school for rehab 10 months later.

“Doesn’t matter who it is, you know, somebody raped my daughter. I don’t care who it is,” Dan Owens said.

Owens is Abby’s dad. He said the alleged rape explained his daughter’s devastating decline and ultimate removal from the tennis team for drugs and alcohol.

“I was basically, I was crying for help everywhere and I was like ‘someone please notice that I’m not OK,” Abby said.

Eventually Abby told her father about the alleged assault.  According to the lawsuit, he then reported it to another LSU coach.  That’s when Abby says she felt violated once again.

“She (the coach) responded by saying ‘I don’t believe her. She’s a liar.’ I will never forget,” Abby said. “I was so just, like, hurt because that was the big reason I never spoke up and why I stayed in self-blame for so long was because I was scared that I wouldn’t be believed.”

She says for that reason, she never went to police. And the school never came to her. She left in 2017.

In 2020, after reading about the LSU scandal, Abby Owens checked to see if there was a Title IX report, something the school is required to file if there are allegations of sexual misconduct.

“She said that there was no record, but there was a mention that I may have been assaulted, and no one ever investigated. No one ever followed up.” Abby said. “No one ever called me.”

WWL-TV requested interviews with LSU administrators as well as Miram Segar.  The University responded by directing us to the Husch-Blackwell Report.

As for Derrius Guice, we reached out to his attorney Peter Greenspun several times, but he never called back.    In previous articles, Greenspun says Guice adamantly denies the charges, and questioned why the women would wait for years to bring forward the accusations, saying the timing “calls into question the credibility …of what is being alleged.”

Meanwhile, LSU has barred Guice from any future involvement with the school and says it will strip h.is name from the school’s record books.