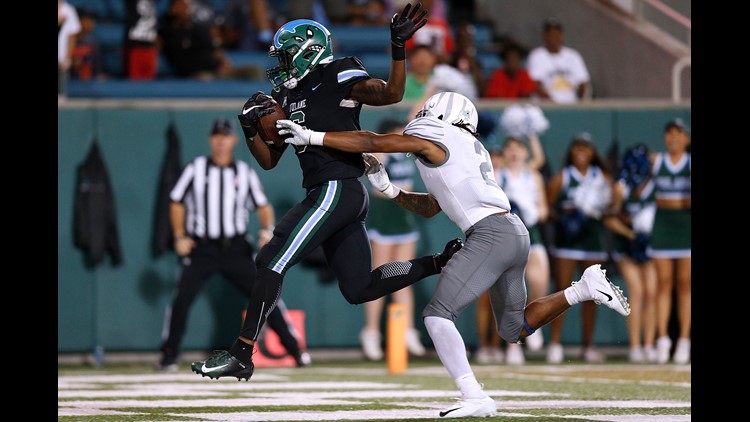 Photo by: Jonathan Bachman
Corey Dauphine #6 of the Tulane Green Wave scores a touchdown as T.J. Carter #2 of the Memphis Tigers defends during the second half at Yulman Stadium on September 28, 2018 in New Orleans, Louisiana. (Photo by Jonathan Bachman/Getty Images)

Tulane rips Memphis for first win over Tigers in 18 years

Offense and defense both put on a show at Yulman Stadium on Friday night as the Tulane football team defeated Memphis 40-24.

The Green Wave (2-3, 1-0 American Athletic Conference) had 496 total yards of offense – including 318 on the ground – while holding Memphis to only 277 yards. Tigers running back Darrell Henderson, who entered the game with a nation-best 12.2 yards per carry, put up just 51 yards on seven carries.

The win was Tulane's first against Memphis since 2000, breaking an 11-game losing streak against the Tigers.

Stephon Huderson and Darius Bradwell set career highs rushing the ball, picking up 58 and 143 yards, respectively. Corey Dauphine and Bradwell each had two rushing touchdowns, and Darnell Mooney had another through the air.

Tulane also dominated time of possession, holding the ball for 37 minutes to Memphis' 23. The Green Wave ran 78 plays on offense compared to the Tigers' 51, and Tulane's defense got off the field often by holding Memphis to 4 of 12 on third-down conversions while making nine tackles for loss. The Green Wave had just six sacks all year before the game and picked up seven on Friday night.

Tulane was also secure with the ball, going without a turnover for the second straight game. That snapped Memphis' 20-game streak of forcing at least one turnover.

While the final score was convincing, the game was tight until late in the third quarter. The deciding blows for Tulane came in a span of three plays at the end of the third and start of the fourth quarters.

After taking a timeout with two seconds left in the third quarter, Justin McMillan came in as quarterback. He found Darnell Mooney on the left side of the field, and Mooney did the rest, streaking down the sideline for a 51-yard score that made it 24-14 Tulane.

Memphis chose to take the ensuing kickoff out of its end zone and only advanced to the 10, setting up another Tulane score three players later. Freshman defensive end Juan Monjarres put pressure on Memphis quarterback Brady White, forcing him to fumble the ball in the end zone. A Memphis player fell on the ball, giving Tulane a safety and 2 more points for a 26-14 lead with 14 minutes remaining.

The safety was the first that Tulane scored since Oct. 11, 2014 against UConn.

Five plays after that, Dauphine added insult to injury when he sped past the Memphis defense for a 46-yard touchdown run and a 19-point Tulane lead. And after forcing a Tigers turnover on downs, Bradwell went around the edge for a 25-yard touchdown to make it 40-14 with just under eight minutes left.

Tulane got off to an impressive start with the ball, driving 75 yards in 12 plays to take an early 7-0 lead on the Tigers. Five different Green Wave players helped get the ball down the field, and Darnell Mooney had three catches on the drive. Dauphine capped things with a 2-yard touchdown run, his fourth of the year.

But immediately following a failed onside kick attempt, Memphis got the ball at the Tulane 47 and running back Darrell Henderson took it straight into the end zone on the first play to tie the game at 7-7.

Tulane got right back on top, though, thanks to some daring on a fourth-and-1. On its own 47-yard line with a yard to gain, Darius Bradwell went up the gut for 53 yards and a touchdown. That put Tulane over 100 yards rushing for the evening, extending the Green Wave's streak to 32 consecutive games while giving the home team a 14-7 edge on the scoreboard.

Right before halftime, Tulane extended its lead to 10 points on a 20-yard field goal. Tulane faced second-and-25 on the drive thanks to a penalty and a sack, but Bradwell ran for 21 yards on that play and Huderson got Tulane to the 1-yard line three plays later with a 22-yard run. With time running short, one last attempt to get into the end zone failed, and Glover split the uprights to put Tulane ahead 17-7 at the break.

In the third quarter, Memphis came out of the gates strong, scoring a touchdown on its first possession. This one was also a long play to Henderson, though it was through the air. Brady White found Henderson wide open on the left side for a 43-yard touchdown completion, and Tulane's lead was cut to 17-14.

From there, though, it was all Tulane.

Tulane is back on the road next weekend, heading to Cincinnati to take on the Bearcats. The game will be televised on ESPN2 or ESPNU at 11 a.m. central.