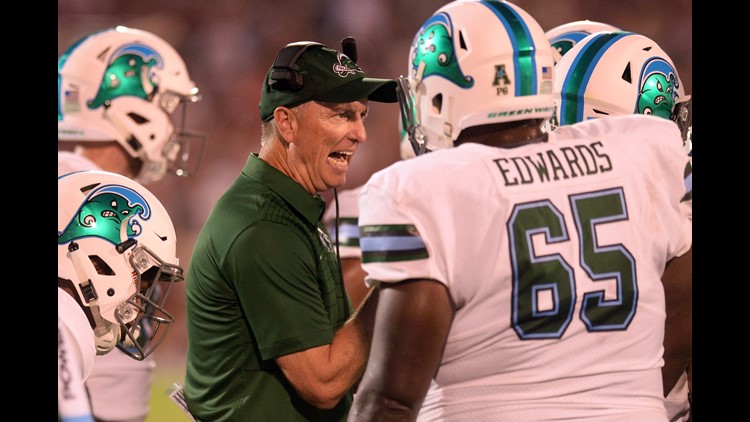 Head coach Willie Fritz speaks to his team in a break in action in a game earlier this season. Photo: Mark D. Smith-USA TODAY Sports

NEW ORLEANS — Tulane posted 634 yards of offense, while only allowing UConn 234 total yards in the Green Wave’s 49-7 victory on Saturday at Yulman Stadium.

Tulane (5-1, 2-0) quarterback Justin McMillan accounted for three touchdowns – two through the air and one on the ground – while completing 18-24 passes for 231 yards and rushing for 37 more. Running back Corey Dauphine touched the ball five times for 87 yards and a touchdown, while wide receiver Darnell Mooney posted four receptions for a team-high 77 yards and a touchdown. Senior P.J. Hall led the defense with seven tackles.

On Tulane’s second drive, Dauphine ripped off a 57-yard run for his 11th touchdown of his career to cap off a five-play, 88-yard drive. After a UConn three-and-out, senior Darnell Mooney caught a 22-yard touchdown to finish an eight-play, 58-yard drive to put the Olive and Blue up 14-0.

With 10:57 remaining in the second quarter, sophomore Macon Clark intercepted a pass from the Huskies and returned it 20 yards for a touchdown to put the Green Wave up 21-0. This was the first interception and touchdown of his career. On Tulane’s next drive, McMillan finished a 10-play, 65-yard drive with a 14-yard rushing touchdown. This gave the Olive and Blue a 28-0 lead going into the half.

At the half, Tulane had 352 total yards. McMillan accounted for 186 yards and one touchdown on 16-22 passing and 20 yards and a touchdown rushing. Redshirt-senior Jalen McCleskey was tops on the team with five receptions for 39 yards at the break.

In the third quarter, redshirt-freshman Cameron Carroll got the scoring started for the Green Wave with a two-yard touchdown reception to close a six-play, 72-yard drive. This was Carroll’s second touchdown of his career. Redshirt-junior quarterback Keon Howard came on in relief and rushed for a nine-yard touchdown to put the Green Wave up 42-0. This was Howard’s first rushing touchdown in a Tulane uniform.

Freshman Jha’Quan Jackson scored on a 14-yard pass from Howard to put the score at 49-0 with 6:43 remaining in the fourth quarter. The Huskies added a touchdown with 2:27 remaining to set the final score at 49-7.