4 Takeaways: The Jameis Winston era has begun in New Orleans

Winston was calm and in control Monday night and he was the first to congratulate teammates — even when he wasn’t in. 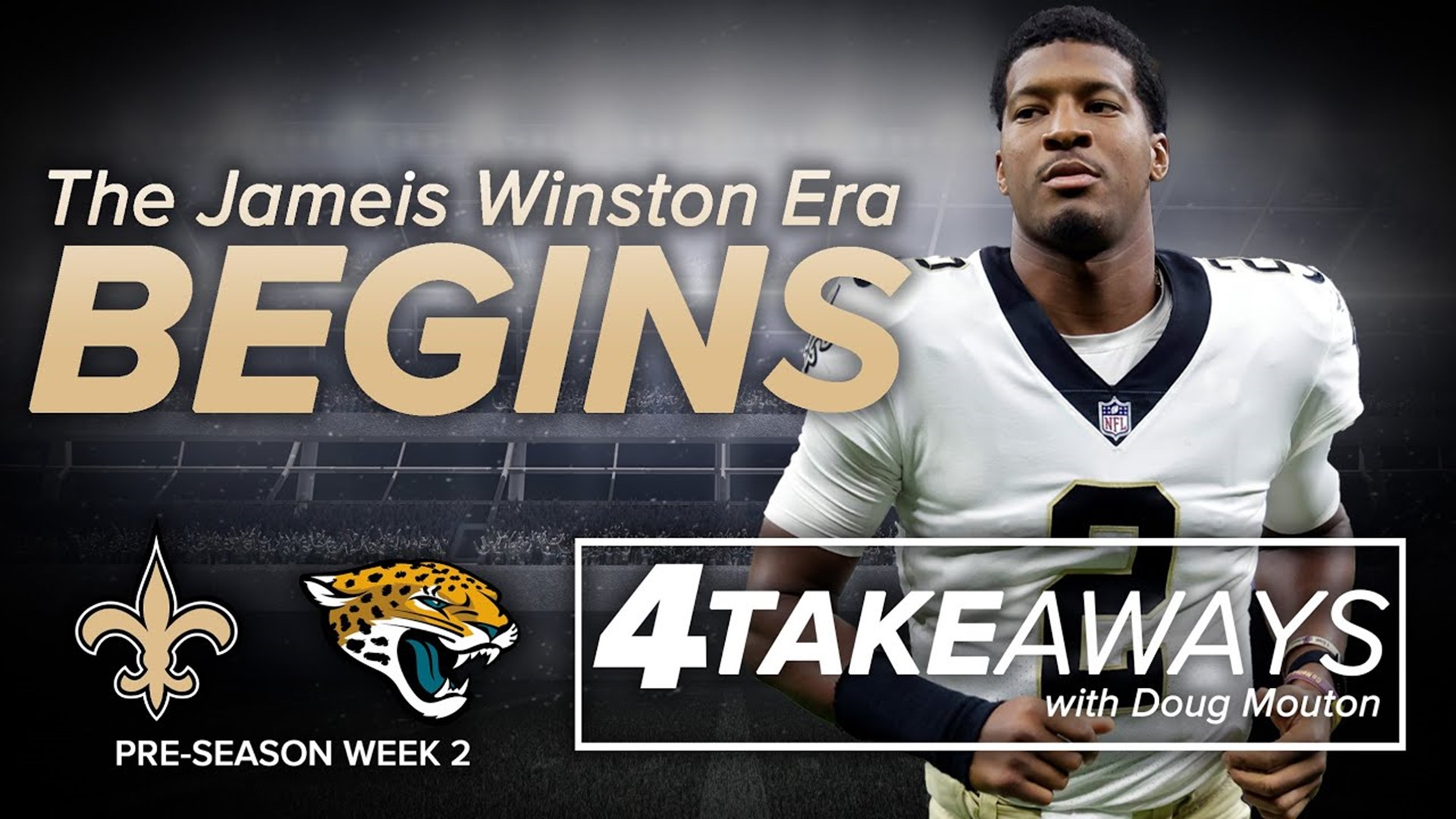 NEW ORLEANS — Talk about an eye opener! If that first quarter didn’t give you a jolt, check your pulse.

Before we get to our Four Takeaways, let me say, after watching Monday night's win, maybe the best way to guarantee success this season would be to figure out how to play the Jacksonville Jaguars nine times this season.

If Urban Meyer can turn this thing around and win in Jacksonville, then he is the legend they think he is in Gainesville and Columbus, because he is literally starting from scratch.

Ken Crawley has made plays all camp and he made plays Saturday night.

There’s a growing belief that Marshon Lattimore will not be suspended for the start of the season and with CJ Gardner-Johnson playing in the slot and rookie Paulson Adebo having an excellent camp, the secondary as a whole does not look like a weakness right now at all.

The defense as a whole dominated early.

While Jameis Winston and Marquez Callaway had Who Dats’ heads spinning, Gardner-Johnson and the Saints defense was just as good.

In Jacksonville’s first three possession, they gained a grand total of 26 yards. That’s in the ENTIRE first quarter.

The Saints, by the way, gained 134 in their first three possessions.

Again, I know the Jaguars offense isn’t striking fear into anyone, but now, possibly having Lattimore at the start the season and with the rise of Ken Crawley and the continued terrific play from Marcus Davenport, a defense that finished fourth in the NFL last season doesn’t look like it’s dropping off at all.

In week two of the NFL preseason, no player’s fantasy football stock rose more than Callaway’s.

He makes catches in traffic. He doesn’t have to be open to make plays. That’s HUGE! The concentration on his first touchdown grab was unreal.

And behind Callaway, Lil’jordan Humphrey and Ty Montgomery made their cases to be on the 53 man roster with seven combined catchers.

No. 1 — Jameis Winston should be the Saints QB

The numbers are unreal. Jameis Winston’s QB rating Monday night was near perfection.

In his six NFL season, Jameis has never been close to that rating over the course of an entire game, but it didn’t happen by accident.

Sean Payton kept the entire starting offensive line in for every one of Jameis Winston’s snaps. Payton did everything he could to put Winston in a position to succeed and when he did, after 16 snaps, he took him out.

And it wasn’t just the numbers. Winston was calm and in control and he was the first to congratulate teammates — even when he wasn’t in.

In other words, he looked like the Saints’ leader. And here’s the thing, he throws a beautiful deep ball. Defenses will have to play the Saints honest when Winston is in.

That will open things up for Alvin Kamara.

The Jameis Winston era has begun.