Forecast: A month with Jameis Winston

What's your favorite part of the Jameis Winston experience? Mine is how we over analyze every questionable throw like it's a 4.5 billion dollar infrastructure bill. 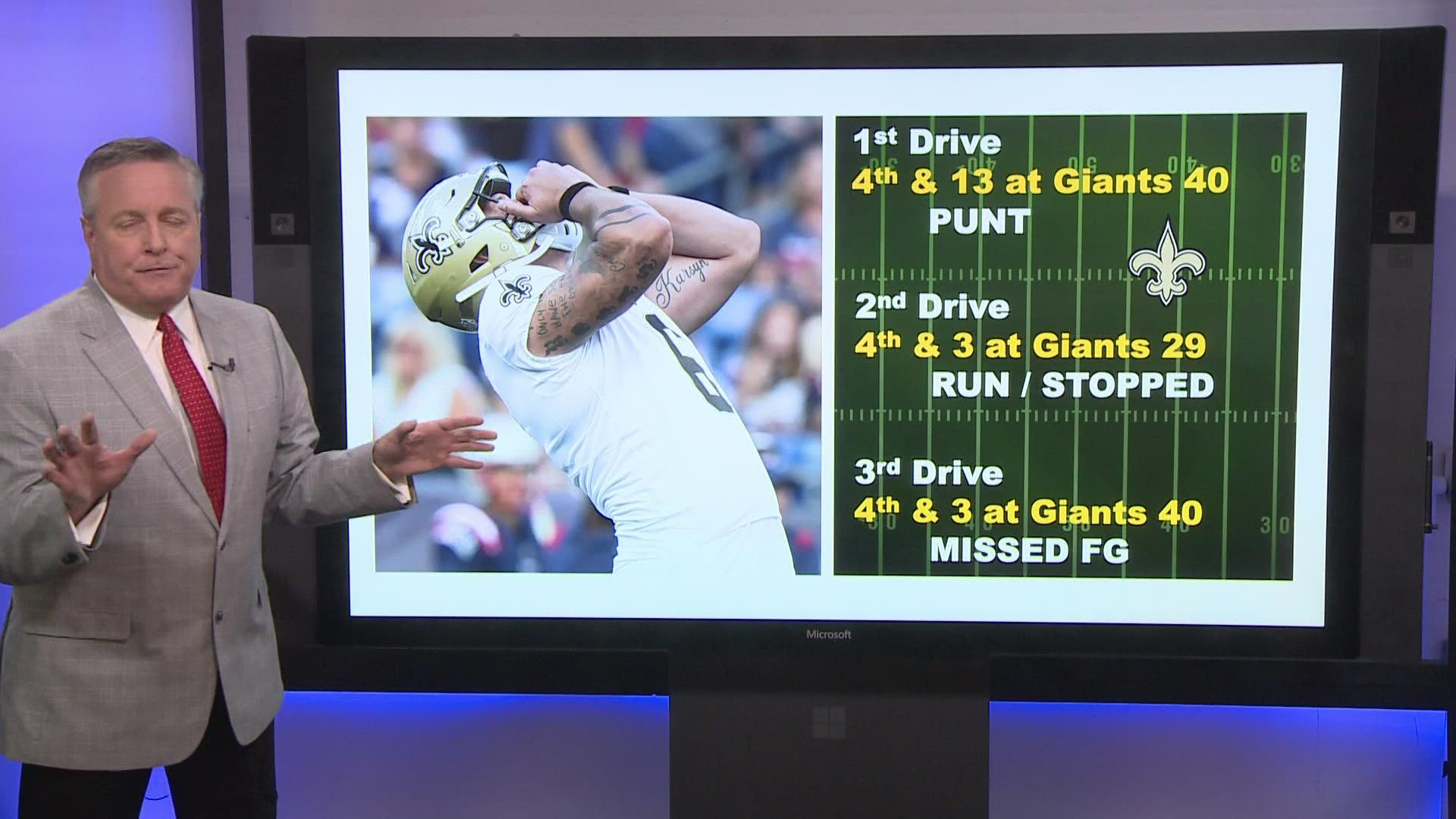 NEW ORLEANS — We are a month into our 'Jameis Winston is the New Orleans Saints starting quarterback' experience. Are you enjoying it? Have you made at least 9000 comparisons between Drew Brees and Jameis Winston in your head every time a huge moment happens in a Saints game? It's ok, I do it too.

The first 2 weeks of 2021 Saints football social media swung wildly from,  “OMG the Saints not benching Drew Brees in 2021 for Jameis cost New Orleans a Super Bowl” after the huge win in Green Bay to “LOLZ same old Jameis” after the complete team debacle in Carolina.

It's been as fun as I imagined. Jameis is a kind of lovable goofball that's way more fun to root for than I expected because of his previous off the field issues. If this Jameis during the pregame huddle moment doesn't make you laugh out loud, we might not be able to be friends.

So how's Jameis' season gone so far? The Saints offense hasn't performed to the level we are used to, especially in the passing game, but Jameis projected season stats would deliver his highest quarterback rating of his career (106.4), which is nearly 20 points higher than his career average (87.4). He'd also have career low in interceptions (8). Granted he'd throw for career low in yards (2,452), which seems laughably low for a Sean Payton offense. It's a work in progress and I'd expect Winston to throw for more yards and more interceptions than he's currently on pace for.

What's your favorite part of the Jameis Winston experience? Mine is how we over analyze every questionable throw like it's a 4.5 billion dollar infrastructure bill getting debated by Congress.

That miracle YOLO throw to Marqez Callaway against New England? Lots of people on social media told me “Actually Ralph, that was a good decision.” Even though Jameis said after the game “That was all God.”

Once you embrace the complete madness and irrational existence of being a Saints fan, the ridiculous judgments of Jameis on a play-by-play basis is exhilarating. We shall go from wanting to pay him $150 million dollars to wanting him not to fly home with the team from Washington all before the first quarter ends.  It's a roller coaster of emotions.

Every bad Jameis throw fills up my Twitter mentions with 'Drew would have never done that!' and 'Drew made bad throws too!' Poor Jameis, he's following a legend who will only grow more perfect the further we get away from Drew's playing days. Don't believe me? Go ask an old head Saints fan about Archie Manning. They'll corner you with stories about how he was Tom Brady like great but the Saints got their head kicked in every week in the 1970's because...reasons.

We need some sort of Jameis Winston Approval Meter, that fluctuates like the stock market on a minute-by-minute basis on game day in the corner of our TVs.

So what would a column on Jameis Winston be without the hottest boldest take imaginable. What I've seen from Jameis the past 4 weeks, he's going to be the Saints quarterback in 2022. The Saints will get Michael Thomas back and that's going to allow the passing game to be what Sean Payton wants.

Jameis in the second half against the Giants looked the part of #1 overall draft pick franchise quarterback. He connected on 12 consecutive throws, made tough passes into tight coverage, and looked like the kind of quarterback a team can win a lot of games with. We are going to see more of that Jameis going forward in 2021.

I reserve the right to change this opinion 4680 times Sunday.

Saints Fan Mood and Meditation Music: Confusion | Electric Light Orchestra
I'm still not over the loss to Giants. How did that happen? Sean Payton is putting yo-yos in players lockers because he wants consistency and not a yo-yo team. Us too Sean. Us too. The 2021 Saints have a very 2002-2003 Jim Haslett 'We can look great and terrible' all in the same game sort of feel. Saints Sundays are now a mystery wrapped in a riddle. It's confusing but like an 1980's ELO video also curiously enthralling.

New Orleans (-1) at Washington: Both teams are looking at this game as a 'Get Right' game. The Saints look at a Washington defense allowing over 300 yards a game passing and 30.5 points a game as a chance to really set their offense on the right path. Washington's poor performing defense looks at the Saints thinking, “We can get back on track against that mediocre passing attack that's missing Michael Thomas.”

One team is going to leave this game completely panicked and 2-3.

The forecast in Washington DC calls for 60% chance of rain. I'm not sure who that would favor. Sean Payton has a very good track record against Ron Rivera coached defenses. Good enough for me. The defense will bounce back, Jameis will continue to play well, and the new Saints kicker will deliver the win.

New York Jets (+4) at Atlanta: The Saints 4th quarter meltdown against the Giants meant we couldn't enjoy the Falcons collapse against Washington. Such a tragedy.

Denver (-2) at Pittsburgh: The Steelers being terrible brings me more joy than I could've ever dreamed.

Carolina (-4) vs Philadelphia: The Panthers traded for Stephon Gilmore this week. Their competence upsets me.