A year of unrest, pandemic and loss has Ralph saying the Saints are more important in 2020 than ever before. 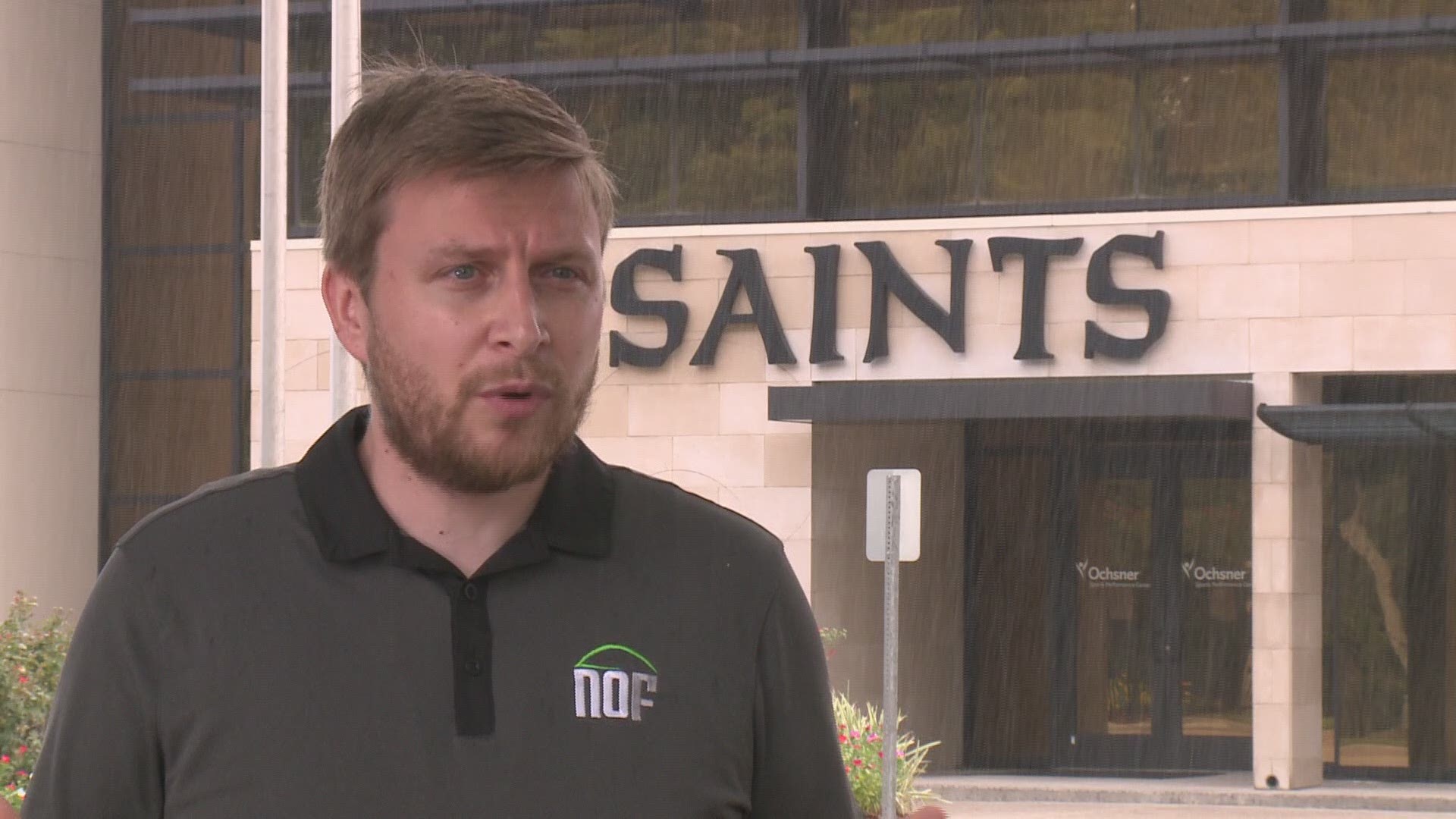 2020 is maybe the worst year of my life. It's been filled with death, funerals, and a life turned upside down and sideways all at once. Five relatives in the ground because of coronavirus, money struggles, and watching people fight over which old guy is the only one capable of saving the United States of America. 2020 feels like Mike Tyson and I am Michael Spinks; the beating is swift, unrelenting and getting up off the floor occasionally feels like a waste of time.

Only 2 things have been able to help me escape from the seemingly never ending awful that is 2020; my 4-year-old kid and Saints football. Let me tell you, 4-year-olds have no use for pandemics and adults life stresses. My kid wants to know “Where is the pandemic? I don't see it? Why can't we go to the water park? Or the zoo? Animals don't have the Rona. Trampolines can't have Rona cause they bounce.” 4-year-olds only wanna party and play.

Funerals, finances, or the protests on TV don't deter them from wanting fun when they are awake. Children's' quest for fun is not stopped by the world being on fire. Fishing with my kid and listening to him explain how he can hear the fish and we need to move while my phone lays in the grass playing Tom Petty is probably as good as 2020 has been. My kid is in the Garden of Eden without a care in the world and it's refreshing to go there with him as often as possible.

The Saints were busy

While life turned into chaos the New Orleans Saints spent 2020 assembling the best roster in team history, even if in the spring and early summer football in the fall seemed an impossible thing to pull off.

But here we are.

The Saints even outdid themselves by trying to add defensive end Jadevon Clowney to the best roster in franchise history because while the rest of the NFL sees a potentially shrinking salary cap as something to fear, Saints General Manager Mickey Loomis sees the salary cap as a figment of scared men's imaginations to be conquered. I applaud Mickey Loomis attempting to use Cleveland Brown salary cap space to sign players. Loomis conjured up something so magical Roger Goodell probably refused to approve what he couldn't understand. True genius is never recognized in its own time.

The 2020 Saints offseason was all sorts fascinating of things. They added a star receiver to go along with Michael Thomas by signing Emmanuel Sanders, they did 3 draft day trades because trading up in the NFL Draft is usually as much a part of New Orleans spring as Jazz Fest.

Drew Brees said some things that deeply hurt his teammates and decided making amends with the people he sees every day and has friendships with in the locker room mattered more than what random people on Facebook or politicians thought of him. If you are mad at Drew Brees and not watching football because politics matter more to you the Saints, it's America so live your best life. You are about to miss 16 weeks of a weird, incredible, once in a lifetime Saints football experience. Also why are you reading this column?

In 2020 politics might be in everything and everywhere but I just choose to block it out of my football experience and focus on things that really matter; reminding people the Atlanta Falcons blew a 28-3 lead in a Super Bowl.

Sundays will be weird

I'm so happy Saints football has arrived. I've never needed it more. The exhilaration, the heartache, the jokes, and caring so much about something that isn't really that important in the grand scheme of things has never been more appealing. Instead of fretting about how strange 2020 Saints football will be, I've decided to embrace the uniqueness. Hopefully we will never experience another football season with no or limited fans at games and have to worry if any Saints players test positive on Sunday morning for coronavirus and can't play. By the way, the Sunday morning reports telling us if any NFL players tested positive for coronavirus and are ineligible are going to be incredibly stressful on those of us who gamble on football, keep us in your prayers.

Every piece of evidence says 2020 is the worst and will only get bleaker from here, but I'll believe in the football team with the Hall of Fame quarterback, the arrogant coach who has as much fun sticking it to opponents as we enjoy watching him do it, the best roster in team history, and is tough enough to get back up after devastating playoff exits and start the journey to a Super Bowl all over.

The 2020 Saints are about to win a fourth straight NFC South Division title, make Tom Brady wish he stayed in New England, and win a Super Bowl, making all those painful ending the last three seasons evaporate from our memories so fast, eventually we will wonder if they ever happened at all.

When the Saints win the Super Bowl in the words of Don Draper of Mad Men, “It will shock you how much the last three years of painful playoff losses NEVER happened.”

Believing in a football team that is 37-11 since 2017 is easy and in a year where everything else in life is so hard I'm going to enjoy how easy it is to believe the 2020 New Orleans Saints can make all our football dreams come true.

How bad is 2020 for me? I've turned to Taylor Swift's music for comfort and understanding. I'm a Swiftie now. I'm definitely too old to be listening to Taylor Swift's Exile. What exactly does a breakup song have to with the 2020 Saints? This verse explains perfectly what Saints fans have been living the last 3 years in January...

“Second, third, and hundredth chances Balancing on breaking branches Those eyes add insult to injury I think I've seen this film before and I didn't like the ending”

2021 starting with another horrible soul crushing Saints playoff loss probably feels inevitable the way 2020 has gone but Taylor gives that burst of hope when she belts out “I think I've seen film before, so I'm leaving out the side door.”

If Taylor can sing about kicking Bon Iver to the curb, flipping the script, and changing her life, the possibilities for the 2020 Saints are elation, euphoria, and the perfect Drew Brees good bye.

New Orleans Saints (-3.5) vs Tampa Bay: Can I just say my life as a Saints fan was just fine being able to ignore the Buccaneers entirely. Atlanta and Carolina are always fun because the Falcons blew 25 point leads in Super Bowls and Cam Newton was always dressing funny and losing to the Saints when it mattered most. The Bucs? They had that quarterback with the lumberjack beard that annoyed us that one time but the last time they were relevant, George Bush was still in his first term, and people believed Nickelback wasn't terrible.

Here's the question no one has any idea about in 2020 when there will be football games with no or limited amounts of fans; Will home field even matter? Tom Brady vs Drew Brees would have been a ridiculous ticket to get. I could argue it'd have been the most anticipated season opener in Saints history. The Superdome would've been electric and bursting at the seams. Now? It's just two NFL teams in an empty building. Football is going to the weirdest of all the sports with no fans. Football moreso than any other sport has an entire culture of tailgating and fans celebrating before, during, and after games. There are Saints fans where the game isn't even the most fun and important part of their Saints fandom. Also, there's a very good chance no NFL player has played an actual football game without fans. Why would they? Football has complicated uniforms, rules, a giant field, etc. Why would you go through all that trouble without fans? And a scrimmage is not a game.

Eventually players will figure it out but Sunday expect strange things. The Saints are the best team in the NFL and they could beat teams playing under the Carrolton overpass, which the way 2020 is going, might happen by Week 3. Saints 31-17

Kansas City (-9.5) vs Houston: This pick is based entirely on my belief Bill O'Brien has no idea what he's doing running the Texans. Chiefs 35-17

Carolina (+2.5) vs Las Vegas: Speaking of teams that don't know what they are doing? The Raiders just traded a guy they drafted in 3rd round this year? That's normal. Also I can't help but root for Teddy Bridgewater this week. Panthers 24-20

Miami (+6.5) at New England: Who will be better without the other, Tom Brady or Bill Belichick? It'd be delightful if they are both awful and filled with regrets by October. Dolphins 26-23

Cincinnati (+3.5) vs Los Angeles Chargers: The Bengals have always been my AFC team. I root for them but when they lose it never really bothers me. Now they have Joe Burrow and the fact he gave us the greatest season of LSU football in history before the world went sideways somehow makes 2019 LSU more special. I'll love Joey Football forever.