Forecast: Next 4 weeks could decide if Saints have QB of the future - or not

If the Saints don't have their QB they could be in a bad place filled with Nick Foles, Sam Darnold, Drew Lock, and people mumbling about 'defense wins championships' 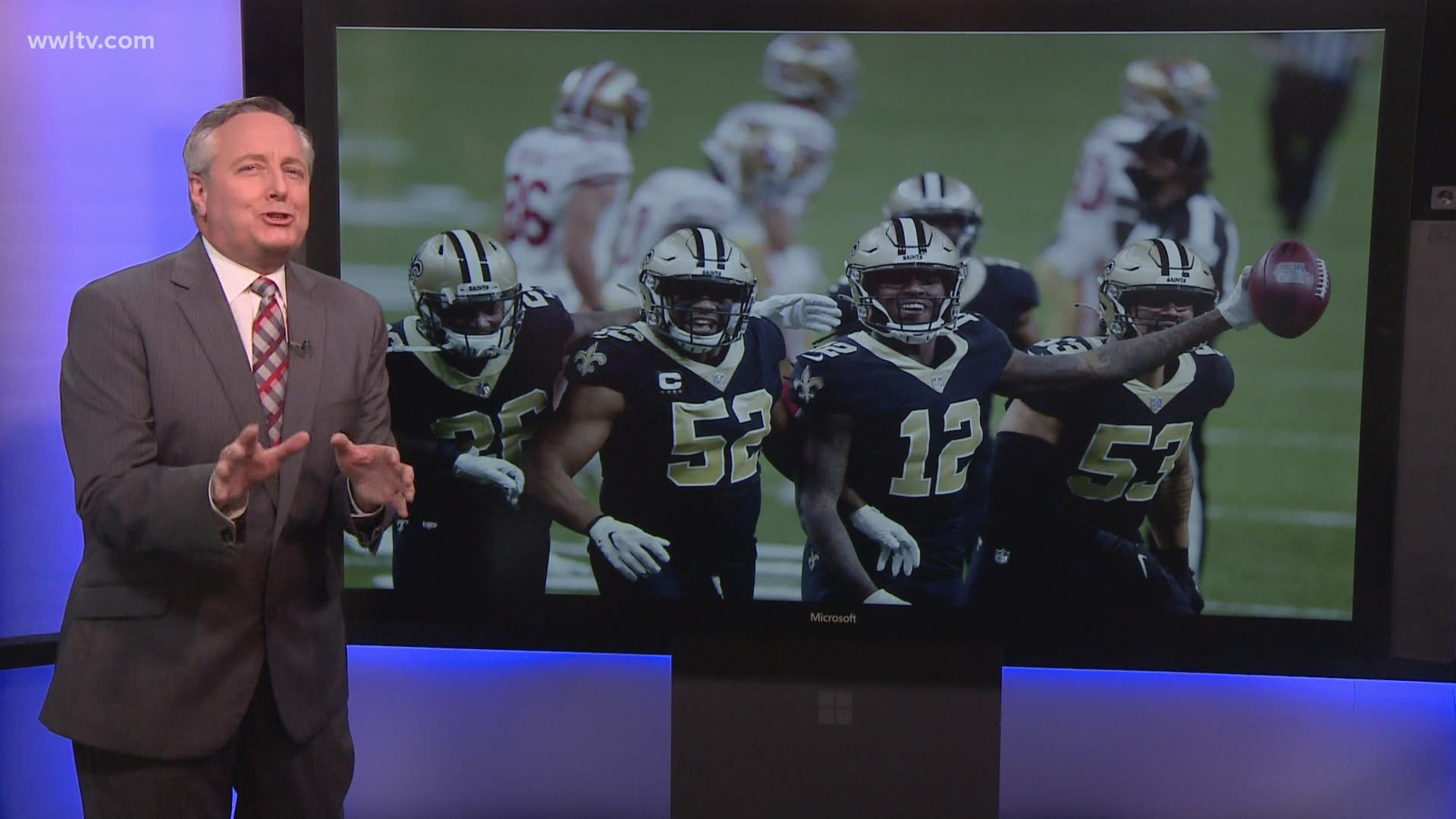 The next 4 weeks could be a month that will influence the New Orleans Saints for the next decade. Sean Payton gets a month to decide if the quarterback he wants to lead the Saints after Drew Brees is currently on the roster.

While we obsess over how Drew Brees' cracked ribs and punctured lung will affect the Saints 2020 season, we could be getting a sneak peek at the post-Drew Brees world. The Saints convinced Jameis Winston to come and be Drew Brees' backup on a minimum salary and now Jameis and the Saints are likely to get 2 to 4 weeks of living together and then get to decide if they want to get married next spring.

We might feel great about living in a post-Brees football universe if Jameis Winston looks fantastic in Sean Payton's offense or we could be thinking, "My god, the Saints are going be banished to the cold, dark, poor corner of the NFL where all the quarterback needy teams pretend having a defensive led team is fun and winning 17-10 isn't like getting a root canal. It's a horrible place filled with Nick Foles, Sam Darnold, Drew Lock, and old people mumbling about 'defense wins championships."

RELATED: Without Brees? | Saints' resourcefulness & resilience to be tested

It's a grim place. Saints fans over 40 know how scary it is and we don't want to go back.

While Drew Brees getting injured in what is most assuredly his final season is depressing because it means less chances to watch the greatest quarterback the Saints will ever have, it's also an opportunity for the Saints to make an informed decision based on the actual play of Jameis Winston and decide if he's worth investing in long term.

Some of you are probably screaming at your computer screen, "WHAT ABOUT TAYSOM?" I've seen enough and believe Taysom Hill is a wonderful football player, but he's never going to be the Saints full time quarterback. If I end up being wrong, feel free to email and laugh at me, but if the Saints 2021 starting quarterback is on the current roster, it'll be Jameis Winston.

Sean Payton got asked this week about comments he made in March about how Taysom had earned the right to be the backup to Brees. Payton responded by saying, "Both of these young guys have progressed, have advanced understanding of what we are doing." Not exactly a ringing endorsement of Taysom's ability to be starting quarterback.

Winston has made mistakes on and off the field. At least outwardly, he has changed. For one thing, Jameis looks almost too thin. His body is barely recognizable from his time in Tampa. Physically he really does remind me of former Saints quarterback Aaron Brooks, right down to the #2 on his jersey.

Go ahead and roll your eyes about Aaron Brooks all you want; He's the second-best quarterback in Saints history and it's not even really a contest. Here's the list of Saints quarterbacks to ever win a playoff game: Drew Brees and Aaron Brooks. That's it. That's the list.

This isn't just a fork in the road moment for the quarterback future of the Saints, if Jameis Winston doesn't succeed starting for a 7-2 football team led by offensive mastermind Payton, he may be relegated to being a backup or he may end up being Ryan Fitzpatrick 2.0; A guy teams will only let start until they acquire something better.

fail. He came to New Orleans to rebuild his image and value across the NFL. He's never been in a situation with as good a team as the 2020 Saints. If Teddy Bridgewater can parlay 5-0 into 60 million, you better believe Jameis could make himself 100 million starting games for the Saints in 2020.

We all loved Teddy but Winston's ceiling as a player is so much higher. Winston was the first overall pick in the 2015 NFL Draft for a reason, he has every physical tool you'd want in a quarterback. Every time Sean Payton talks about Winston he talks about Jameis' arm talent like I talk about a fried oyster po-boy -- lovingly with just a touch of obsession.

Can Sean Payton get Winston to lower his penchant for back breaking interceptions while harnessing his incredible ability to make preposterous throws only a handful of NFL quarterbacks are capable of? We are about to find out. The next 4 weeks will be our own voyage into the future of Saints football and we will get the answer to the question, "Do the Saints know who their 2021 quarterback is?"

Saints Fans Mood and Meditation Music: Are You Sure Hank Done it This Way -- Waylon Jennings

It's time to get used to the fact the quarterbacking we'll be seeing post Drew ain't gonna be like Drew. 75% completions is a unicorn thing Drew Brees does and isn't going to be done consistently by the next Saints QB or anyone probably.

Waylon sang "It's been the same way for years." He might as well be signing to Saints fans. But when Waylon sang "I don't think Hank done it this way" he's saying everything is changing and we better all get used to it.

Jameis or whoever follows Brees will do it their way, and as long as it leads to wins and fun, we should be ready to embrace it. Waylon Jennings is awesome, this my favorite Waylon song, and I just wanted an excuse to use it.

New Orleans (-5) vs Atlanta: It's Falcons Hate Week! It's time to binge on 28-3 jokes, Mike Smith slander, and remind every Falcons fan on earth the Saints have a Lombardi Trophy and Atlanta does not. Is that petty? New Orleanians as a people we are the pettiest people the good Lord ever created. It's part of what makes us special.

The 2020 Falcons have lost games in hysterical fashion. They'll blown double digit leads to the Bears and Cowboys and lost to the Lions after scoring a game losing touchdown instead of just running out the clock and then kicking a field goal. If they weren't the Falcons, they'd probably be 6-3 and Dan Quinn would still be their coach. The thing is though, the reason they coughed up all those leads is because their pass defense and pass rush are atrocious. Only the Seahawks have allowed more passing yards and the Falcons are just 24th in the NFL with 14 sacks.

Jameis Winston, if he can avoid his dreaded turnover issues, should have a field day against the Atlanta defense and have 3478 articles written next week about,"The new and improved Jameis!"

Sean Payton was eating a steamed poppy seed bagel with cream cheese during his Wednesday conference call with media, and I take that as a sign he is relaxed, confident, and the Saints are going crush the Falcons and turn their souls to ash.

Cleveland (-3.5) vs Philadelphia: Have you seen the Eagles schedule? They are gonna be HARD PRESSED to get to 6 wins. We might have a 5-10-1 team hosting a playoff game, which would be hilarious, unless the Saints are playing in it.

Minnesota (-7) vs Dallas: Don't look now but here come the Vikings. I hate them so much.

Green Bay (+2) at Indianapolis: Phillip Rivers will infuriate us by gift wrapping this game to the Packers.

Los Angeles Rams (+4) at Tampa Bay: The Rams are quietly a very complete team except for fact Jared Goff is a mediocre quarterback.