Forecast: Sean Payton will embrace the chaos of the 2021 Saints season

Sean Payton sounds and acts like a guy about to empty out his bag of offensive delights. He's not just about surviving the chaos, he's looking to create some. 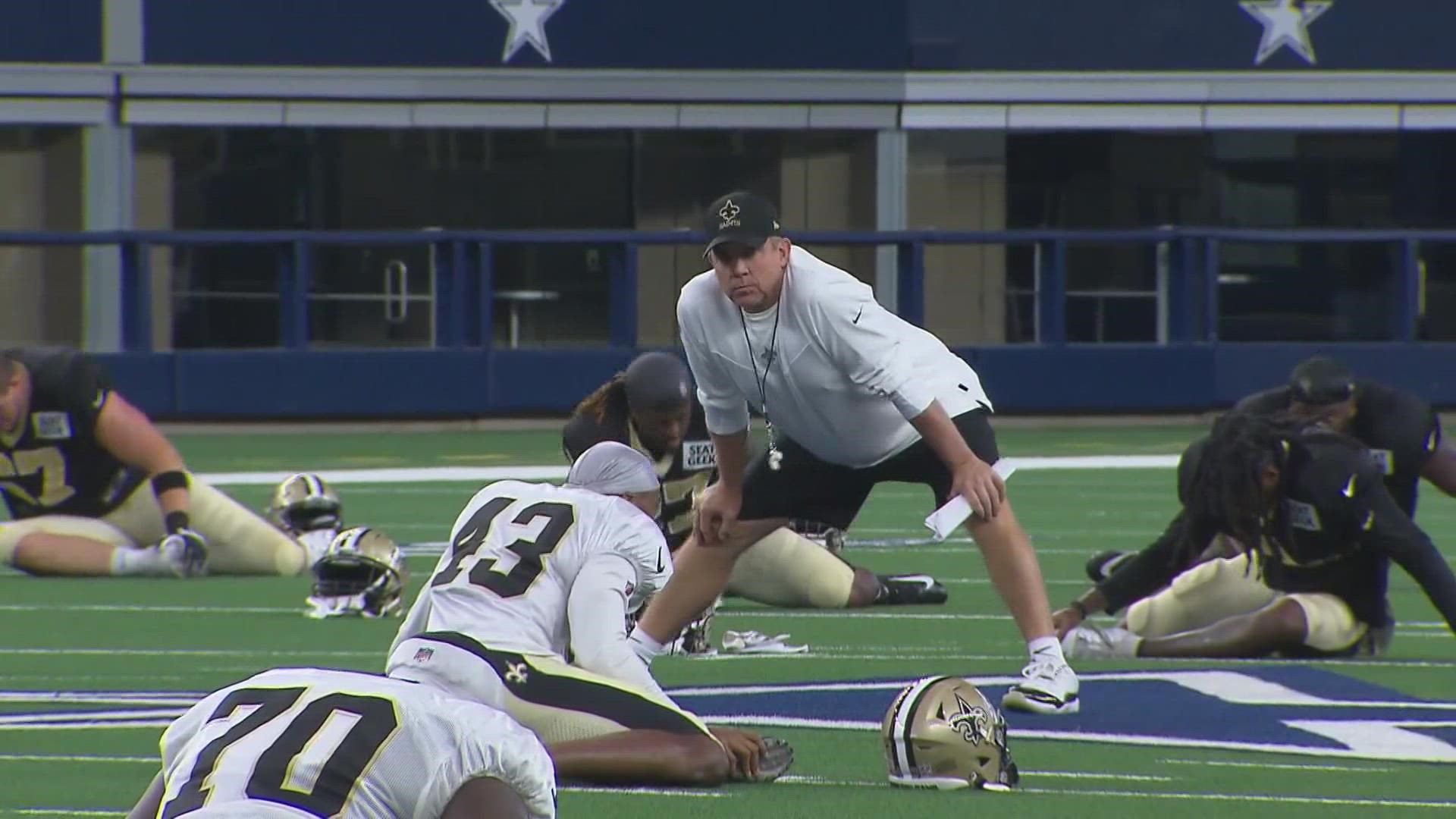 NEW ORLEANS — The understatement of the year is to say South Louisiana is in a bit of a chaotic state right now. The chaos even affected me in Houston as my entire immediate family stayed with me for parts of the past week.

You go from a house of three to a house of nine, and let's just say it ain't exactly smooth. But it's Louisiana and it's family, and you just sort of embrace the chaos and fight through it.

Every person in south Louisiana or south-Louisiana-adjacent is doing it because that's who we are and what we do in tough times. Sean Payton, head coach of the New Orleans Saints is no different. He's embracing the chaos of the 2021 season.

From having to relocate for a month to Dallas because of Hurricane Ida to having a new quarterback, to having two-star players out for at least six weeks, Sean Payton is a guy embracing the madness.

When I first listened to his initial conference call following Hurricane Ida, I thought he sounded down. But then Saints beat writers Katherine Terrell of the Athletic and Nick Underhill of NewOrleans.football basically said, "Actually no, he wasn't down at all, his willingness to talk at length threw you off."

After I listened to the conference call again I'll admit they were correct.

I found one quote from Payton incredibly illuminating about how he views the team having to relocate temporarily to Dallas:

"There were about 15 kids playing touch football in the meal room. This type of event really does bring a group of people together. We're trying to get them information and make the most of a situation like this. We are receiving a chance to meet family members and children that you normally wouldn't meet from a player to player or coach to player standpoint. You see a lot of these people at games but collectively you do not normally see them unless it's in this unique environment," Payton said.

You think Bill Belichick would be like, "That's kind of cool we got players' kids playing touch football while I'm trying to eat breakfast."? Child please. He'd mumble something about kids ruining his waffle or something.

The 2021 Saints have chaos seemingly swirling all around them and Sean Payton is already seeing how it will bring the team together. Yes, he doesn't have a choice in the matter but attitude in adversity is everything sometimes.

What if Sean Payton isn't just embracing chaos, what if he's about to unleash chaos?

The Saints for the last five years created an offense completely suited to Drew Brees' strengths by becoming a ruthlessly efficient offense that threw the shortest passes by air yards in the NFL.

You know which quarterback threw passes with the most air yards since 2015? The new guy, Jameis Winston.

The 2021 Saints won't look like what they have since 2016. They might not even look quite like the aerial circus of Drew Brees 5,000 yard passing seasons of 2006-2011. What if Sean Payton has something brand new cooked up?

Payton even said Taysom Hill will still be prominently involved.

Sean, I personally really appreciate your commitment to driving NFL Twitter completely mad by continuing to do exotic things with Taysom Hill. It really brings me joy.

Sean Payton sounds and acts like a guy about to empty out his bag of offensive delights. He's not just about surviving the chaos, he's looking to create some.

My attitude for the 2021 Saints is "Embrace the chaos the Saints will be bringing."

So what are we to make of the 2021 Saints chances?

The easy answer to national media who don't follow the team is: "The Saints had to cut a 100 million in cap space, they went from Drew Brees to a turnover machine at quarterback and they still pay Taysom Hill 12 million not to play quarterback. Something something...disaster."

The actual answer is: "Who the heck knows?"

The Saints could win anywhere from seven to 11 games. If the last four years taught me anything, besides the fact Bill Vinovich will haunt my dreams forever, is that the three most precious commodities in the NFL are having an elite quarterback, elite depth on your roster, and an elite offensive-minded coach. The Saints from 2017-2020 were overflowing with all three.

The roster is still very good, and even better with the late addition of cornerback Bradley Roby from Houston. But it's fragile because the Saints depth includes 14 guys who were undrafted free agents. This doesn't mean the Saints can't succeed, it just means the certainty we had from 2018-2020 that the Saints were winning double-digit games is no longer here.

Oh and by the way, props to Saints General Manager Mickey Loomis doggedly pursuing a cornerback like me trying to find a generator in Houston for my brother to take back to New Orleans. Neither of us would accept it was impossible. As my brother told me, “Failure is not an option. I got to have air conditioning.”

The Saints adding a corner right before the season shows they still view this team as capable of winning and they aren't planning on a down year like the rest of the football world expects.

Can Sean Payton pull it off? Can he make Jameis Winston look like what everyone thought he'd be when the Tampa Bay Buccaneers drafted him No. 1 overall? Can the Saints offense still be a top 10 unit without Michael Thomas until October? Can the defense survive not having defensive tackle David Onyemata for 6 games?

I don't know and neither do you.

I'll just trust Sean Payton finds a way and I shall embrace the chaos the Saints will be facing and delivering. Enjoy the uncertainty of 2021 Saints football.

Alive by the Beastie Boys

I Love the Beastie Boys and I'm brainwashing my son into loving them too. We've had a very Beastie Boys intensive summer driving around Houston so I'll pick one of Max's favorite songs this week because it fits.

The song opens "I have never been more ready in my entire life to do this right now."

Sounds like Jameis Winston to me. That man came to Saints and sat and watched for an entire year for this exact moment. He's ready to shut everyone up and make the Saints pay him 150 million next March. I'm here for it Jameis. Go be awesome.

The entire world will be picking Green Bay. Good. That's exactly what Sean Payton wants. The Saints won't have new corner Bradley Roby because he's finishing up a six-game suspension, but they will have a dominant offensive and defensive line to pound on the Packers in the Florida heat.

Here's how I expect this game to go: Jameis and Saints come out red hot, build a huge lead, and it's a party for 3 quarters, then Aaron Rogers leads a comeback as Saints try to hold on for dear life. They do and it's Chauncey Gardner-Johnson who saves the day with an interception and then lets Aaron Rogers know about it.

I'm not a believer that Tampa is some unbeatable super team.

Do we send the Texans a 'Thank You' fruit basket now or do we wait until Bradley Roby starts being awesome for the Saints?

Now that Teddy Bridgewater is the Broncos QB, Denver is my 2021 AFC team. Go be good and fun Teddy. We still love you.