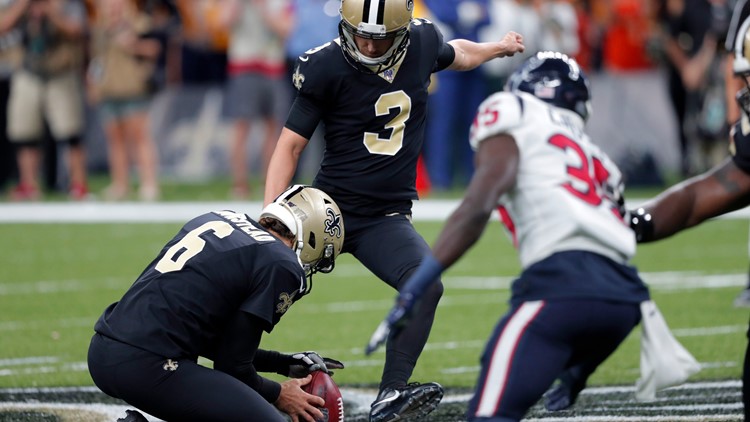 Photo by: AP
New Orleans Saints kicker Wil Lutz (3) kicks a 58 yard field goal as Thomas Morstead (6) holds, at the end of regulation, in the second half of an NFL football game against the Houston Texans in New Orleans, Monday, Sept. 9, 2019. The Saints won 30-28. (AP Photo/Bill Feig)

Forecast: The Saints' pass rush is real and it's spectacular - so far

Do you know who leads the NFL in sacks after one week of football? Why it would be our local professional football team. The New Orleans Saints currently lead the league in sacking the quarterback after registering 6 again the Houston Texans. I know the Texans offensive line is mostly a turnstile where each defender is given a free road map pointing directly to Deshaun Watson's chest, but that's not our problem; 6 quarterback sacks is 6 quarterback sacks. I'll savor each and every one no matter the opponent.

Full disclosure: my formative Saints experience was watching the 1990's Dome Patrol basically attempt to murder quarterbacks on a weekly basis, and while I'm not one of those annoying people who will tell you 'Great defense is REAL football!', the sack is my favorite non-touchdown football play. Trey Hendrickson's sack of Watson Monday where he exploded off the edge and ran by Laremy Tunsil of the Texans combining speed and power was football art.

The Saints aren't going to keep their current pace of 96 sacks for the 2019 season, but what if they could top their 2018 total of 49? What would it mean for a defense that, let's just be kind, had issues Monday. The Saints sacked Watson 6 times and this was without a still recovering Sheldon Rankins and Marcus Davenport still struggling to find consistency.

Trey Hendrickson burst onto the scene with 2 sacks and in Week 1 and suddenly the 2017 3rd round pick is making a statement to be a more prominent part of the historic 2017 Saints draft class. I try not to get too excited over Saints mid round draft picks who show pass rush potential because they usually end up breaking my heart, or in Martez Wilson's case, breaking my heart AND jumping offsides 568 times. I can't help myself though, I love to fall in love with young Saints pass rushers. We are two more Hendrickson sacks in Los Angeles Sunday from me ordering a #91 Hendrickson jersey from China on E bay.

The 2019 pass rush might have more than Hendrickson to help Cam Jordan though. Demario Davis had 5 sacks in 2018 and if not for Deshaun Watson being a preposterous athlete in a league of preposterous athletes, Davis would've had a couple sacks Monday too. Davis has the unique ability to both time his blitz exactly right and contort his body to slide through the offensive line.

If Marcus Davenport can recapture the magic he showed last season against Minnesota, the Saints might actually get to 50 quarterback sacks for the first time since 2000. The way the secondary looked to open the season, I'd say the Saints will need at least 50 sacks, and the season opener was a promising start. Be still my beating, quarterback sack loving heart.

Saints Fan Mood and Meditation Music: The Payback -- James Brown
The Rams might just have been passengers on the Blown Call Train that was the NFC Championship Game but we can hate them all the same. Think of it as hate by association. Also, any excuse to listen to the Godfather of Soul James Brown needs to be taken. The Payback is one of Brown's great songs. The funniest thing is Saints fans are blood thirsty to get even with the Rams while Los Angeles is counting down the days until Lakers season starts and Anthony Davis and LeBron James team up and probably couldn't care less about this game. The Rams have 9 fans, you won't convince me of anything different.

New Orleans (+3) at Los Angeles: I keep reading and hearing the Saints just want to move past the NFC Championship and Rams aren't a rival anyway. Well, I'd like to see if the Saints blowing the doors off the Rams would make me feel any better about the 'No Call'. Also, I'm old and I remember playing the Rams twice a year in the old NFC West, and let me tell you, Saints-Rams in 2000-2002 were some angry, bitter, and hard fought games. Jim Haslett and Mike Martz seemed to really hate each other. It was fantastic. It's still fun to hate the Rams.

Los Angeles scored 30 to open the season against the Carolina Panthers but Jared Goff was only 23 of 39 for 186 yards and a touchdown. Not exactly electric. Sean McVay might be an offensive genius and able to get anyone he once had a conversation with a head coaching job but the Rams offense becomes quite pedestrian if Todd Gurley is stopped or not playing. The bad news for the Saints is he looked very good against Carolina with 97 yards; the good news is McVay is clearly limiting his touches early after last season's injuries.

If Christian McCaffery can have 29 touches and 209 total yards against the Rams, I'm thinking Alvin Kamara can have a very big game with the ball in his hands about half that amount.

The Saints defense problems Monday night were mostly taking bad angles while tackling and the fact they were missing 3 defensive tackles. Both of those things can be fixed before Sunday afternoon.

Atlanta (+1.5) vs. Philadelphia: I want to tell you the Falcons are about to be 0-2 and in total crisis, but they are too talented to fall apart before October.

Miami (+19) vs New England: The Dolphins are still an NFL team, not a directional division III school playing Alabama for homecoming.

Oakland (+7.5) vs Kansas City: All those young players the Raiders drafted looked really good Monday night against Denver. Jon Gruden kinda, sorta, knowing what he's doing would be the surprise of the year after the Antonio Brown saga.