Jaiden is from Chicago and the No. 1 item on his list this year is meeting Jarrius "JJ" Robertson, the Saints Super Fan who became a superstar while waiting on a liver transplant. 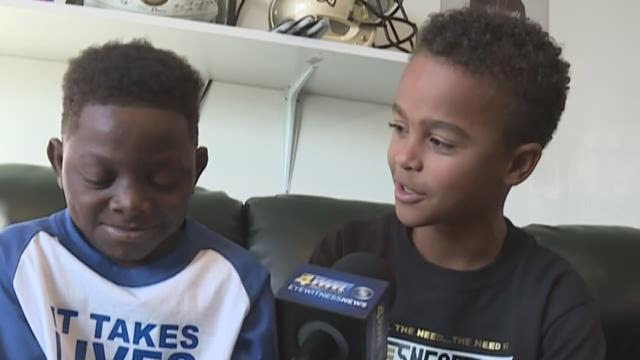 Jaiden is from Chicago and the No. 1 item on his list this year is meeting Jarrius "JJ" Robertson, the Saints Super Fan who became a superstar while waiting on a liver transplant.

Jaiden and his mother, Kimberly McGraw, made the 15-hour drive down South then, in a matter of seconds, Jaiden's wish came true.

Jaiden and JJ may have grown up in two different states, but they share similar stories.

"When Jaiden was 6-years-old, he was sick in the hospital with a rare genetic disease called Kawasaki," McGraw said.

Jaiden remembers visitors and volunteers brightening his spirit. Once he felt better, he began doing the same, joining his mother on more than 200 community service projects across Chicago. That's when he heard of JJ.

"One day I was looking up All-Star, cause it was All Star weekend. And I saw this dude make a shot! So I saw him make a shot and said, 'Hmm...he seems pretty cool," Jaiden Henry said.

The parents reached out to each other on Facebook. After a bit of organizing and planning, Jordy Robertson, JJ's dad and McGraw planned the special meeting.

"JJ had no idea!! I had been working on this for the past three or four months to make this kid's Christmas come through and to surprise JJ," Robertson said.

"I know that there's more than one person like me. And we're both doing the same thing in two different communities," JJ said.

Now, both boys are using their passion to help others by holding a toy drive for children.

"We have spent our last few Christmases in the hospital while waiting for the second transplant," Robertson said. "We try to put smiles on kids faces and make it very important."

These two are even making future plans to meet up for Christmas. JJ would like Jaiden help him feed the homeless. It'll be a Christmas both JJ and Jaiden won't forget. Finding a friendship and a bond while also being an inspiration to others.