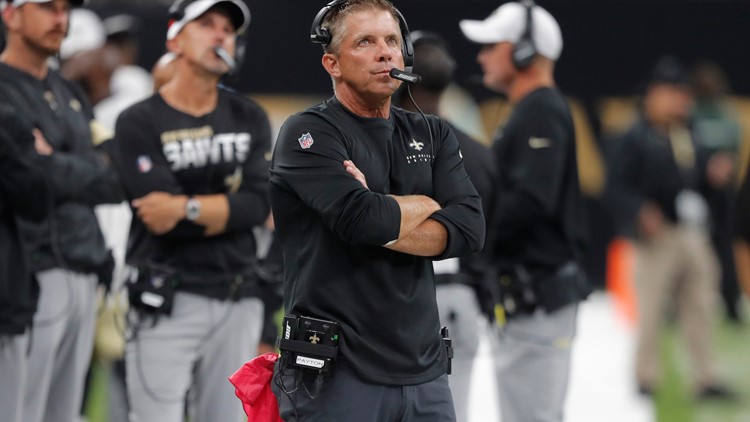 Photo by: AP
New Orleans Saints head coach Sean Payton watches from the sideline in the second half of an NFL preseason football game against the Minnesota Vikings in New Orleans, Friday, Aug. 9, 2019. (AP Photo/Bill Feig)

NEW ORLEANS — Friday night at the Superdome, it happened.

Sean Payton challenged a defensive pass interference call, a new rule that he played a major part in implementing this off season.

“I think the one thing that was different tonight was getting used to ‘hey, we can challenge that?’”

The play in question came in the third quarter when Saints corner Kayvon Webster was battling with Vikings receiver Laquon Treadwell for a deep ball down the sideline.

Both parties were hand checking before Webster swatted the ball away, but that’s also when the laundry hit the field.

“I guess it was maybe the hand fighting,” Webster said. “He wrapped my arm and they thought I wrapped his. It was just good competes to me.”

The Saints went on the lose the challenge, but this was an opportunity for Payton to experiment in a live game, with the rule he helped champion.

And in a regular season game, Payton has already said he believes the new rule will force coaches to think twice before gambling.

Coaches are still given two challenges this season to use at any point, but the worst-case scenario would be to burn both of your challenges early on minor plays.

And not have one available for a no-call like the Saints experienced in last season’s NFC Championship.

“Well, listen, in a regular season game it would depend on where you’re at in the game,” Payton said. “Probably in the first half, you would have to have a strong conviction, you know? So, it’s a lot easier to throw one of those flags preseason week 1.”

The worry that some opponents of this new rule have is that replay can distort what you or a referee saw in real time. When you slow down video, the grabbing and fighting between a defender and a receiver is wildly exaggerated. That’s why Payton still believes – unless it’s flagrant – the refs will stick with the call on the field.

“Being on he committee, I just know the approach that the league is going to take when they are reviewing. They are pretty conservative,” he said. “They’re going to have to see something substantial and we’ll get used to it.”

As will the rest of the NFL.