It's the big game in Tampa Bay: Buccaneers vs. Chiefs, Brady vs. Mahomes. 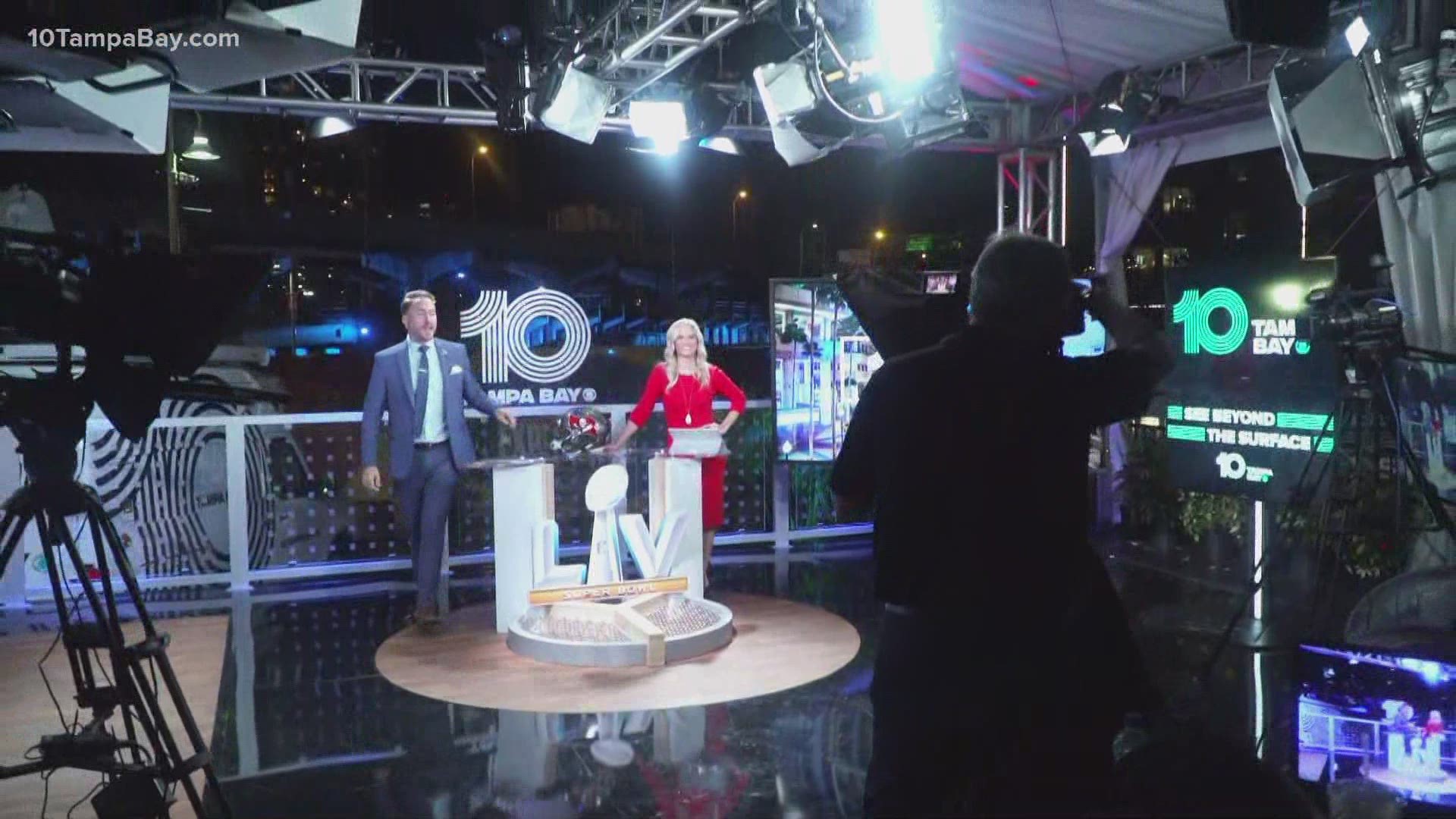 A new champion will be named as the Tampa Bay Buccaneers face-off against the Kansas City Chiefs in the biggest game of the year. It's time for Super Bowl LV!

Of the many storylines to watch throughout the evening, everyone's eyes will be on these two quarterbacks: Tom Brady and Patrick Mahomes. This is Super Bowl No. 10 for Brady, who's going for his 7th title, while Mahomes vies to become a back-to-back champion at the age of 25.

Kickoff was at 6:30 p.m. at Raymond James Stadium in Tampa, Florida. Although far fewer fans are in the stands because of the coronavirus pandemic, those in appearance – from ticket holders to health care heroes – will catch all the action in-person, plus The Weeknd's halftime performance.

CBS is the official broadcast network of Super Bowl LV and, locally, you don't have to tune away to watch: The big game airs on 10 Tampa Bay!

'CHAMPA BAY' CONTINUES ON! Dang, it feels good to live in a title town 😎. What a year for #TampaBay sports! https://t.co/bpcPmcq8CD pic.twitter.com/q8Bw8ZWdLU

ROGUE FAN ON THE FIELD

If you didn't know what the @Buccaneers defense looked like in #SuperBowlLV. Another shutdown for the @Chiefs!https://t.co/LrUyrwsyEK pic.twitter.com/6RlWbta4PO

*most penalty yards in a half in Super Bowl history pic.twitter.com/ku1QpfUxJu

The #PepsiHalftime show with @theweeknd is in the books! So tell us, how would you rate the performance?! 🤔 #SuperBowlLV https://t.co/dIEiOFMEYM

ARE YOU READY?! The #PepsiHalftime show is coming up with a performance from three-time Grammy award winner @theweeknd! Here are a few things you might not have known about the singer:https://t.co/xwr9KQGhzD

8:02 p.m.: Chiefs tighten the gap with a field goal from Butker. Bucs still hold on to an 8-point lead.

7:30 p.m.: Chiefs make a goal-line stand against the Bucs who made an attempt on the 4th down. Hear Simeon Rice's thoughts on the decision.

.@simeon_rice isn’t mad at the 4th and goal try by the Bucs, but would have kicked it. He said that call was also about trusting your defense. @10TampaBay pic.twitter.com/tXcm4PDt6w

WE TAKE THE LEAD! pic.twitter.com/29L7q3tig1

Get that GOAT dirty!

Frank Clark gets home and Tom Brady hits the grass.pic.twitter.com/HRSqGWs0HX

IT'S HAPPENING!! The @Buccaneers and @Chiefs are just moments away from kickoff in #SuperBowlLV.

Want to keep up with all the action? We've got you covered ➡️https://t.co/oJgGPmpzrF#GoBucs #ChiefsKingdom #SuperBowl pic.twitter.com/9bHUQWIY60

6:34 p.m.: Amanda Gorman, who took the world by storm during the inauguration of Joe Biden, recited a poem ahead of kickoff.

RELATED: What you need to know about the historic 'trifecta bomber flyover' at Super Bowl LV

For the 10th time. pic.twitter.com/xtbgvkPmBq

The Chiefs take the field with their eyes set on a repeat. pic.twitter.com/VnOfF9BlmN

6:07 p.m.: Did you place your bets? Who ya got? The Chiefs are favored by 3 points across many casinos, according to the New York Times, which means they need to win by more than 3 points for people who bet on them to win their wagers.

5:54 p.m.: We just heard Alicia Keys perform "Lift Every Voice And Sing" -- also known as the Black national anthem -- ahead of kickoff. The song received renewed attention last summer during the nationwide protests against police brutality of unarmed Black people.

RELATED: 'Lift Every Voice And Sing' could become national hymn

The time has arrived. The time to make the official picks. pic.twitter.com/CMsx4jGqUM

5:37 p.m.: And everyone gets on their feet as the Buccaneers take the field.

Fans on their feet as the rest of the #GoBucs take the field for #SBLV pic.twitter.com/vwF3s1inOK

5:35 p.m.: We have a Cam Brate sighting! The Bucs tight end is active to play in Super Bowl LV.

Here’s Cam Brate, who strained his back in practice last week but is active today #SBLV pic.twitter.com/UP5xPPDKVi

5:20 p.m.: What's the scene inside Raymond James Stadium? There may be more cut-outs than actual people, but those who've made it inside are getting loud!

Just a 🐐 scoping out the field ahead of #SuperBowlLV #GoBucs https://t.co/hlvt4iff6a

Here are the Chiefs’ inactives for Super Bowl LV:

5 p.m.: Who's out for the Bucs? Take a look at their inactive report.

"Obviously, Brady's a great quarterback," Biden said. "Mahomes seems like he's got a lot of potential. And so, I'd probably take a shot with the young guy I didn't expect as much from."

O'Donnell then asked if Biden were picking the Chiefs.

"Well, I didn't say that," Mr. Biden said. "I don't know who's gonna win. I think they're both great quarterbacks. One is just a younger version, potentially, of an old, great quarterback. Not old. In NFL terms."

Pres. Biden tells @NorahODonnell that he once had “wild dreams” of becoming a professional football player.

As a former receiver, he says he’d rather go out for a pass from Patrick Mahomes over Tom Brady: “I’d probably take a shot with the young guy I didn’t expect as much from” pic.twitter.com/Hg2vIjjXeS

4:16 p.m.: OK, this is cool. NASA says the International Space Station will be flying over the Tampa Bay area around 7:15 p.m. Thankfully, all this morning's showers and thunderstorms have moved out -- so skies should be picture-perfect!

RELATED: Super Sighting: International Space Station will be visible over Tampa Bay during the Super Bowl

Those in Tampa, FL can look up at ~7:15pm ET and wave to 8 humans in space! Weather permitting, you'll see the @Space_Station over the #SuperBowl city during the game. Discover more #SpotTheStation viewing opportunities: https://t.co/MGJIkympUx pic.twitter.com/gMCO74rtoa

4:14 p.m.: Would you pick heads or tails? The Super Bowl coin toss is one of the more popular prop bets, according to Sports Illustrated. It says the coin has landed on tails for six of the last seven Super Bowls, with the five prior to those showing up as heads.

And, per The Lines, 25 teams have won the coin flip and the Super Bowl. The team that has won the coin toss the past six years has wound up losing the game.

RELATED: Super Bowl LV may be decided by a flip of a coin

The official coin of #SBLV

4:14 p.m.: With a little more than two hours before kickoff, Mahomes heads outside to check out the field.

Patrick Mahomes takes the walk onto the field at Super Bowl LV. pic.twitter.com/uf6fdOHph2

4:11 p.m.: The Tampa Bay Lightning, fresh of their own championship, is cheering on the Bucs!

3:45 p.m.: The Tampa Bay Buccaneers take us inside their Super Bowl locker room where, hey, it looks pretty familiar in here! Players will be putting on the white and pewter uniforms that, so far, have given them all sorts of luck this past season.

3:29 p.m.: Now it'll be a game. The Chiefs' Mahomes has arrived. If we had to guess, he's probably loving this weather compared to the frigid temps up north!

Patrick Mahomes is in the building 😎 pic.twitter.com/gQ6nsABRkL

The GOAT has arrived at Super Bowl LV. pic.twitter.com/tnsqY0pweB

2:17 p.m.: What colors will the Chiefs be wearing this evening? They give us a little sneak peek.