A reporter from The Monitor, a newspaper in the Rio Grande Valley, tweeted the player was escorted out of the stadium by police. 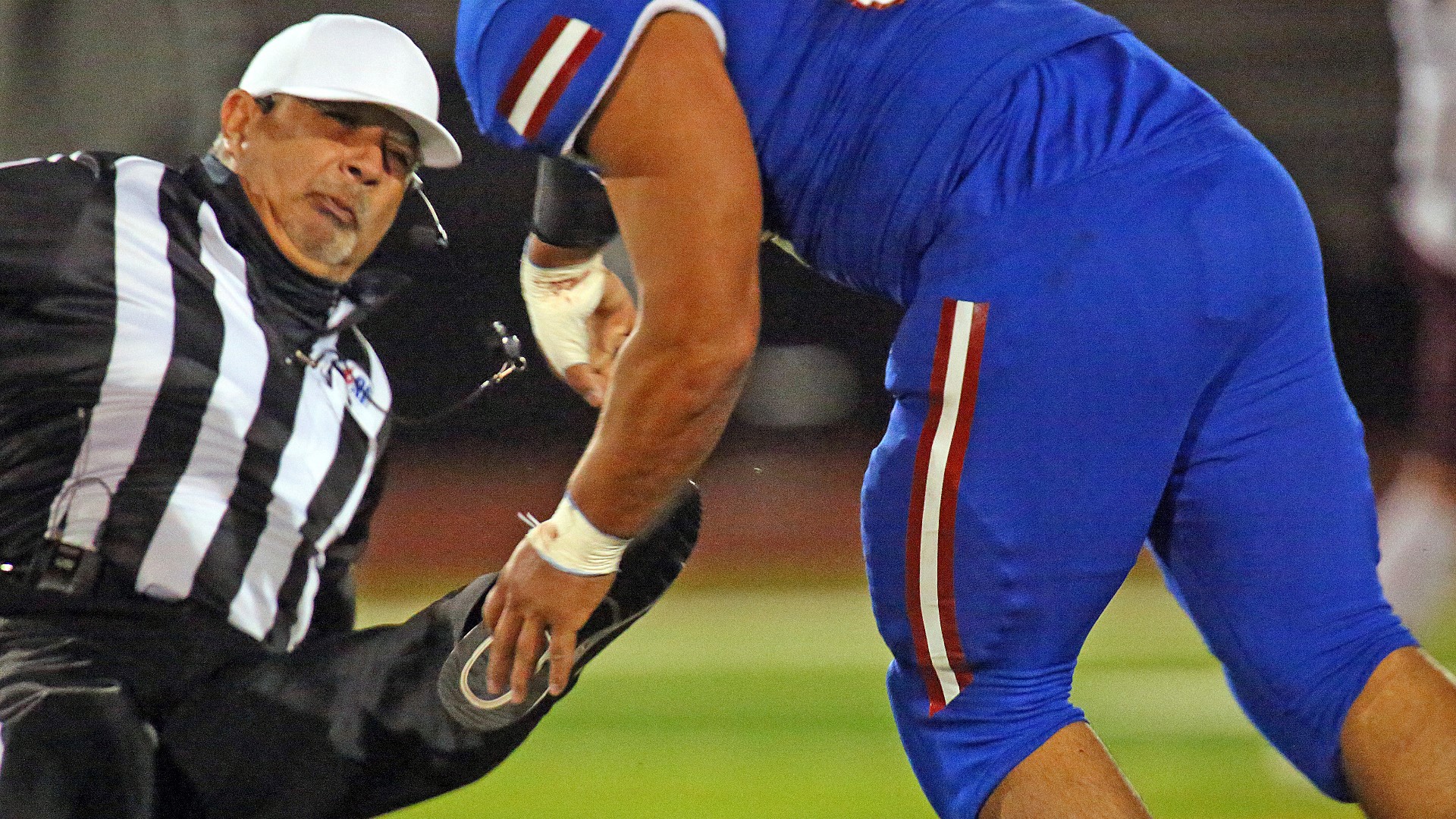 Updated at 7:55 p.m. with information from Dallas Football Officials Association.

A Texas high school's football team will not advance in the playoffs after one of its players attacked a referee during a game on Thursday night.

Edinburg CISD issued a statement Friday morning saying, "The district has decided to remove the Edinburg High School football team from the playoffs after an unexpected incident involving a student that occurred during a football game on December 3, 2020."

The incident happened during the second quarter of the game between Edinburg High School and Pharr-San Juan-Alamo, which Edinburg later won.

The senior player had been ejected from the game after a penalty, according to newspaper reporter Andrew McCulloch, who was covering the game for The Monitor in McAllen.

The player ran back onto the field and knocked the referee onto the turf, McCulloch tweeted.

Credit: Joel Martinez/The Monitor via AP
Football referee Fred Gracia lies on the ground after being charged in a high school game between Edinburg and Pharr-San Juan-Alamo on Dec. 3, 2020.

In an interview with WFAA on Friday, McCulloch reflected on the incident.

“I think the part of it that made it very tough for people to watch is the obvious age discrepancy,” McCulloch said. “The referee in question is 59 years old. The kid is 18.”

“This is a very big, very athletic guy, which is all to say I don’t know that there’s anything more that people on the sideline could have done,” he said.

In the statement, Edinburg CISD said, "We extend a sincere apology to the referee and his family. On behalf of the Edinburg CISD Board of Trustees and administration, we apologize to the athletes, staff, and our school community."

The referee was evaluated for a possible concussion, McCulloch tweeted.

The Texas Association of Sports has opened an investigation into the incident, which the organization called a "vicious and deliberate assault" of an official.

"Unfortunately, this type of blind‑sided assault on an official while working on the field is not new to Texas Football," the group said in a written statement.

Xavier Velazquez is the vice president of the Dallas Football Officials Association.

“The whole situation is very unfortunate,” Velazquez said. “We just hope that the official is OK, we hope that the player comes out of this a lot better.”

Velazquez worries that the incident may affect recruitment in an already challenging year.

“Obviously, COVID hit. And that, we had in our chapter maybe 50 or 60 officials that opted out, which out of a chapter that is almost 600, that is quite a bit,” Velazuez said. “One of the biggest issues that we have is retention as it is, because let’s get one thing straight, we don’t do this for the money, we do this because we like to do it.”

“So, whenever we face challenges like COVID, like this situation that happened here with the official being attacked, it’s very concerning because that’s going to deter future officials from coming and helping out,” added Velazquez.

The name of the Edinburg High School has been corrected since originally published.