The airline canceled more than 140 flights in and out of DIA on Sunday. 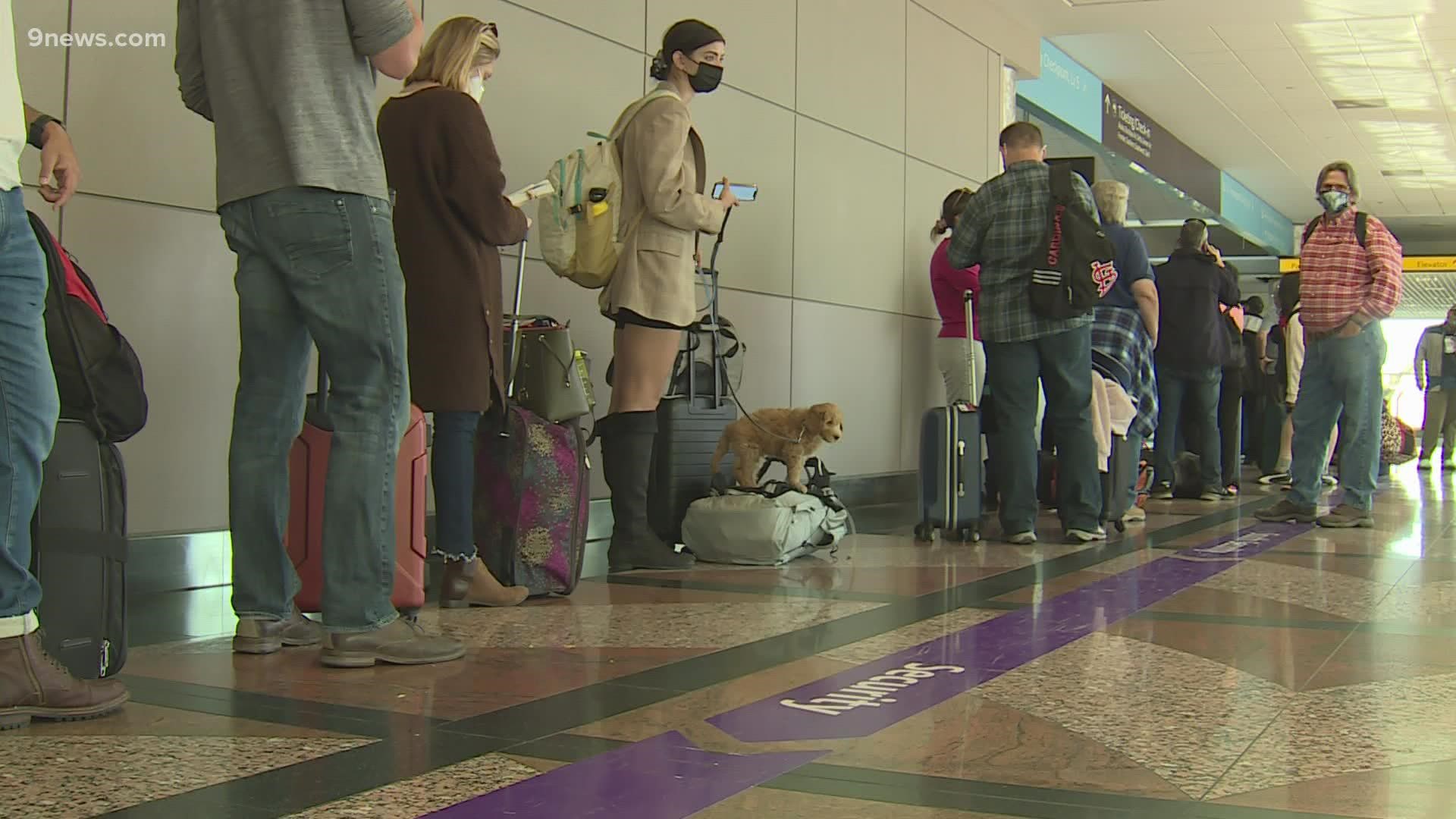 DENVER — Southwest Airlines customers at Denver International Airport (DIA) and across the country are experiencing a large number of cancellations this weekend.

FlightAware reported that on Saturday at DIA, 102 Southwest flights were canceled and 160 flights were delayed.

Thousands of people who planned to fly out of the Mile High City on Sunday spent hours waiting in a rebooking line that snaked around the check-in area. Some customers stood in line for over four hours, only to be told the earliest option to fly out of Denver was on Wednesday.

Ainsley Parfitt woke up to a text, learning her flight was canceled back home to Florida after spending the weekend wedding dress shopping with her soon-to-be sister-in-law.

“I started looking through (online) and there is just nothing, nothing, nothing for the next few days,” said Parfitt, who is a stay-at-home mom who is now searching for childcare for her three kids.

Parfitt and others called the airline to try to rebook. However, most waited on hold without any answer for several hours.

“I have been on the phone since 4:30 a.m. this morning on hold, waiting for somebody to answer. I am still waiting,” said Coles, who is a doctor trying to get home for patient appointments on Monday. “There is nothing available at any price point today, tomorrow or Tuesday.”

Many customers have received reimbursement for the original flights or a voucher for $200 upon rebooking. The cost has helped many recover some of the expenses lost. For those stranded for longer periods of time, the voucher won’t cover the additional expenses for hotels, rental cars and other necessities for longer-than-expected stays.

“We have kind of been screwed in the way that we don’t have money to pay for it,” said Levi Stinson, who was taking a quick trip to Breckenridge. “If we didn’t get a flight, we should get some sort of compensation to get a hotel to lay our head down peacefully tonight.”

Across the entire U.S., Southwest had canceled 1,019 flights on Sunday as of 1 p.m., according to FlightAware.

Air Traffic Control (ATC) issues and disruptive weather have resulted in a high volume of cancellations throughout the...

“We experienced weather challenges in our Florida airports at the beginning of the weekend, challenges that were compounded by unexpected air traffic control issues in the same region, triggering delays and prompting significant cancellations for us beginning Friday evening," the airline said in a statement to 9NEWS. "We’ve continued diligent work throughout the weekend to reset our operation with a focus on getting aircraft and crews repositioned to take care of our customers.”

Customers stranded at the airport, however, remain confused over the issue when other airlines have continued operations as normal.

“So they are trying to tell us there is a problem with weather and air traffic control. When I look at my weather map, the skies across the country are absolutely clear. There are no reports online of a significant air traffic control problem,” Coles said. “There is no explanation with this problem, so it’s sad that Southwest can’t be straightforward with us. I’ll think twice before ever flying with them again.”

The Federal Aviation Administration (FAA) tweeted Sunday: "No FAA air traffic staffing shortages have been reported since Friday. Flight delays & cancellations occurred for a few hours Friday PM due to widespread severe weather, military training, & limited staffing in one area of the Jacksonville en route center. Some airlines continue to experience scheduling challenges due to aircraft and crews being out of place."

The forecast for Denver on Sunday called for sunny skies and temperatures in the mid-60s.

“Based on what I’ve seen, there didn’t appear to be any high impact weather that would’ve significantly affected Southwest operations yesterday or today,” 9NEWS meteorologist Chris Bianchi said. “The weather was relatively tranquil coast-to-coast, including Southwest’s primary hubs and their hub here in Denver.”

Customers who were affected by cancelations were asked to rebook their flights by visiting Southwest's website.

The nationwide cancellations came as the airline announced Monday that the company will now require employees to get the COVID-19 vaccinated by Dec. 8. It was unclear whether this is related to the high volume of cancellations across the country.

The Southwest Airlines Pilots Association (SWAPA), Southwest pilots’ labor union, said in a press release that they are aware of the issues Southwest is experiencing.

"SWAPA is aware of operational difficulties affecting Southwest Airlines today due to a number of issues, but we can say with confidence that our Pilots are not participating in any official or unofficial job actions," the press release said.

Southwest Airlines is the only airline experiencing a high volume of cancelations.