A cold front Thursday night kicks off a chilly stretch through the weekend, but the coldest air may arrive Monday into Mardi Gras Day. 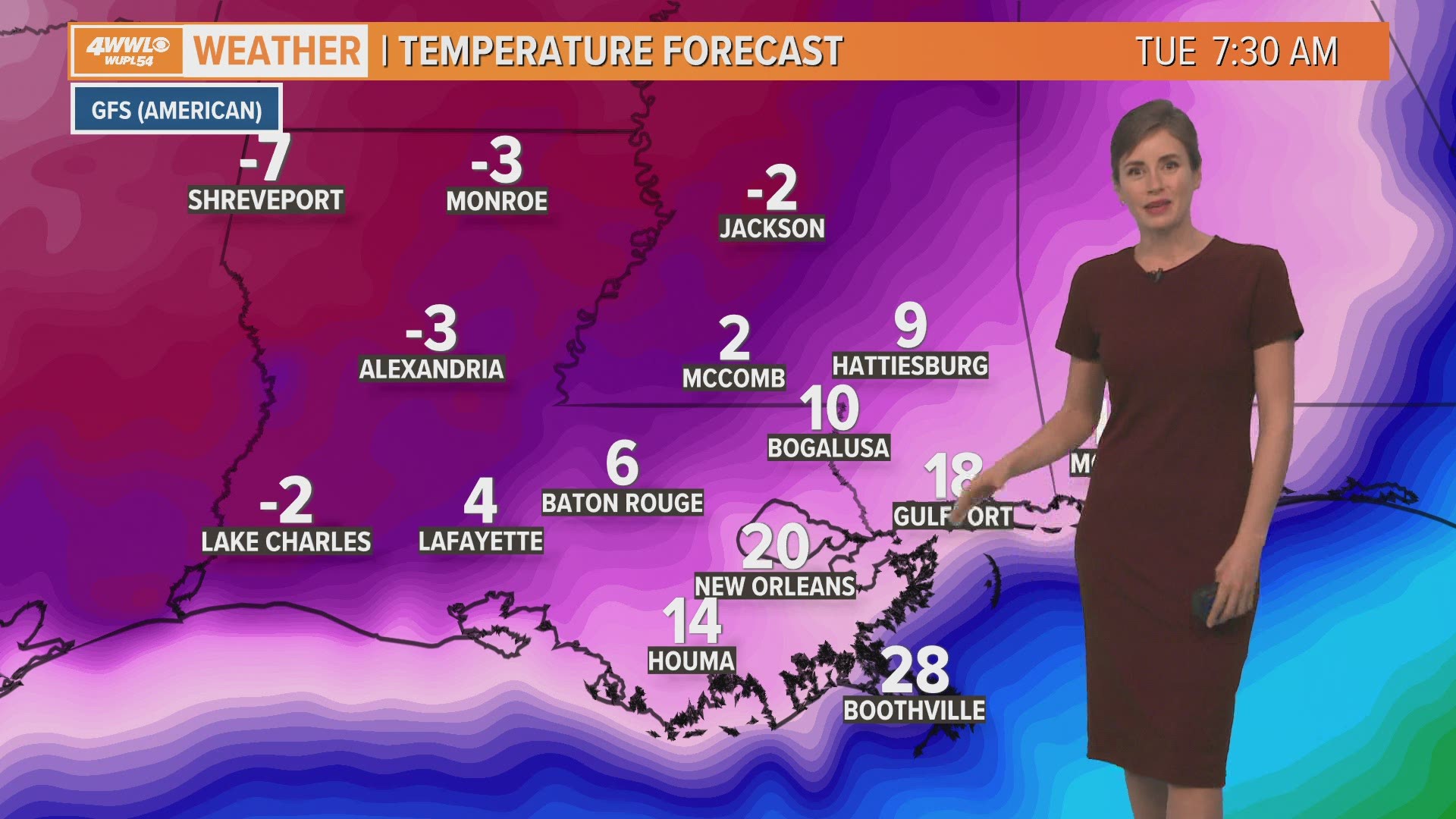 NEW ORLEANS — Arctic air will surge into the New Orleans area just before Mardi Gras Day, but even this weekend looks chilly with temperatures mainly in the 40s and 50s.

Models have differed greatly with timing and intensity of the arrival of the coldest air. Right now, both global models (GFS and European) agree that it likely won’t be until Monday or Tuesday that the coldest air arrives this far south.

WHEN WILL THE COLD START?

The first push of cooler air will gradually filter in Thursday night with showers and some thunderstorms. This will bring us into the 50s for Friday morning.

Friday will be the first chilly day as temperatures likely stay in the 50s through the afternoon. Some lingering rain could still be in the area on Friday.

Saturday continues chilly with a morning in the 40s and afternoon temperatures in the 50s. A few showers could still be around during the day as the cold front slowly nudges away from our coastline.

It turns slightly colder Sunday with a morning in the upper 30s to around 40 degrees, while afternoon highs may be around 50 degrees.

RELATED: Entergy warns of increased energy usage due to cold weather forecast ahead

RELATED: Will Arctic air give New Orleans its first freeze in 3 years this weekend?

HOW COLD WILL IT GET NEXT WEEK?

Right now it appears the main surge of Arctic air will arrive Monday into Tuesday with the coldest morning on Mardi Gras Day.

Models still differ about just how cold it will be, but right now are seeing anywhere from 10s to 30s. The coldest projection is from the GFS which shows teens and 20s at sunrise Tuesday. The European model has been showing a more moderate solution in the 30s Tuesday morning. This has been the trend over the past several days - the GFS has been trending much colder and the European relatively warmer.

If it turns out on the lower end of this temperature range, New Orleans and the Northshore would get a hard freeze. That means we would need to make sure exposed outdoor pipes are protected, as well as plants and pets.

If it turns out warmer like the European model shows, we’d stay in the light freeze or frost range and would just have to protect plants and pets, but not pipes.

WILL THERE BE SNOW?

As for frozen precipitation – models continue to struggle with handling a series of disturbances as the cold air surges in.

Snow appears unlikely since there will likely be warmer air aloft. If anything, it would likely be sleet or a mix of cold rain, sleet and a few snowflakes.

Right now timing for that possibility would be during a brief window Monday night or very early Tuesday morning.

While it looks quite cold Monday and Tuesday, there's still a big spread in model solutions. That will likely get resolved as we get closer, so we just have to wait a little while to get a better idea of exact numbers. Please keep checking our forecast as we continue to refine it.