In the interview with David Hammer, May said the River Tower that collapsed in Avondale was “very robustly engineered” and didn’t need to be replaced. 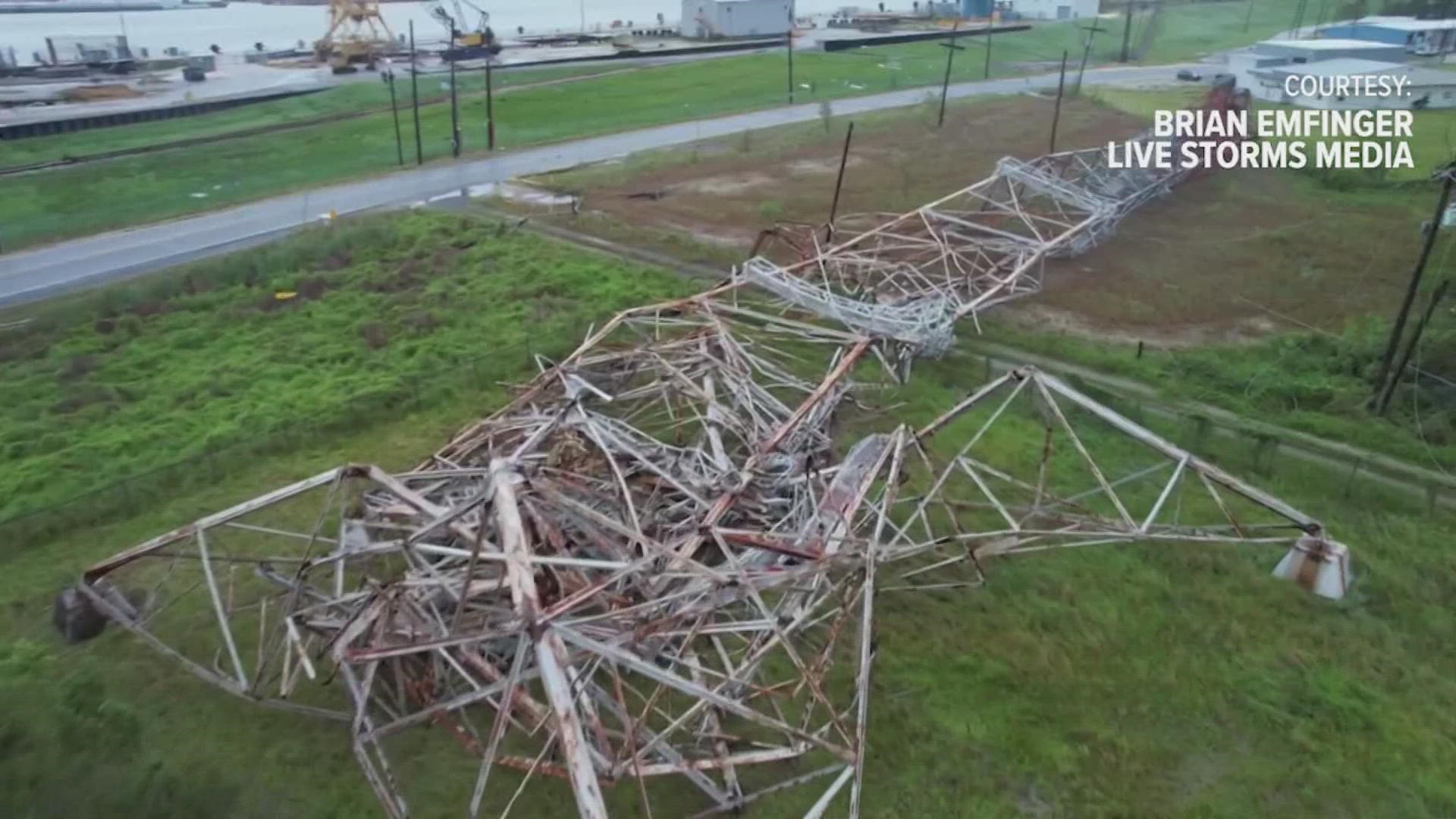 NEW ORLEANS — A new class-action lawsuit filed on behalf of Entergy customers accuses the company of “grossly inadequate maintenance and inspection” of a system that “would not sustain even a hurricane with wind gusts below 100 miles per hour."

The lawsuit was filed by 17 Entergy customers against Entergy Corporation and its subsidiaries, Entergy Louisiana and Entergy New Orleans, on behalf of all 900,000 Entergy customers who lost power in Hurricane Ida.

The lawsuit claims Entergy failed to invest in a more resilient and redundant electric grid. Local and state regulators, who have approved increases in Entergy's rates to cover new power plants and infrastructure repairs following previous storms, have also begun to question since Ida if Entergy properly maintained its system.

A team of plaintiff attorneys, led by Stuart Smith, a veteran of class-action cases against industry giants, accused Entergy of "greed and lies" that "set the foreseeable stage" for customers to be forced out of their homes for days or weeks and for the city of New Orleans' sewer system to lose power.

Smith hopes the lawsuit forces Entergy to address problems with its transmission system, where regulators imposing a few million dollars in fines or threatening antitrust investigations have failed.

"There's going to have to be a negotiation with the stockholders to give back that money that they took to essentially harden their systems, which they didn't use on their systems," Smith said. "But that this can never happen again in a city like New Orleans. I mean, we have had enough."

“It's laughable that we allowed this to go on this far and this long," said Juan LaFonta, another member of the plaintiffs' legal team and a former state legislator. "I mean, they knew prior to this storm the stuff that happened with the windstorm that came through a couple of months ago, that (Entergy) had challenges and didn't make it public.”

The lawsuit alleges Entergy makes $11 billion a year while repeatedly deferring maintenance on its critical transmission system of high-voltage wires, towers and poles.

The lawsuit cites Entergy CEO Phillip May’s interview with WWL-TV on Aug. 30, the day after Hurricane Ida, where the CEO claimed that his company's transmission equipment had been engineered to withstand 150 mph winds.

In the interview, May said a main transmission line tower that collapsed in Avondale was “very robustly engineered” and didn’t need to be replaced. He also said it had just passed an inspection in December 2020.

But WWL-TV found the 400-foot tower collapsed into a rusty heap during the storm.

The Louisiana Public Service Commission says it has no inspection reports on file for the tower, and Entergy has declined WWL-TV's repeated requests for a copy of the report May talked about.

That tower collapse only affected one of eight main transmission corridors into the New Orleans area. The seven other lines also failed. The company said that was because of wind damage to just 12 of the 1,500 poles or towers that carry those lines.

Seven of those 12 structures – in addition to the Avondale tower – were destroyed, and five others were damaged, Entergy said.

Entergy reports spending $4.2 billion on expanding its transmission system since 2014. It also spent $100 million last year to strengthen substations that receive high-voltage power from the transmission lines and convert it for distribution to homes and businesses.

May told WWL-TV that newly built or restored towers and wires and strengthened substations are engineered to withstand 150 mile per hour winds. But winds in the area where the tower stood only gusted to 92 miles per hour, according to National Weather Service data.

“So how can we hold them accountable if they're clandestine in the information they're holding? They're not being transparent to the community,” LaFonta said.

Entergy used paid actors to lobby the New Orleans City Council to let it build a $210 million power plant in New Orleans East, promising it would be able to "black start" without access to transmission lines from outside the area. When the power went out in Hurricane Ida, the new plant, which opened in 2020, did not start up until power was restored on one of the transmission lines from Slidell.

City Council President Helena Moreno wasn't on the council when it voted in 2018 to let Entergy charge customers about $10 per month to recoup its costs for building the new plant. Now, Moreno is Entergy’s lead regulator in New Orleans.

She is calling for investigations of Entergy by larger regulators at the state and federal level and is holding a public hearing on the matter at City Hall on Wednesday.

"I hope that I'm wrong, but I feel like the company is just way too focused on their profits and not on the very best for their ratepayers," Moreno said, "and that they're too focused on investing in building power plants because that's what makes the money and not investing in hardening their transmission lines and allowing competition into their transmission, because that doesn't make them money."

Moreno said she was frustrated to learn how Entergy has been allowed to operate in the past. For example, the U.S. Justice Department’s Antitrust Division found Entergy was limiting competition and preventing customers from benefiting from the lowest energy costs. The DOJ said Entergy could address those issues by selling off its transmission lines to a third-party in 2012, but Entergy never did it.

Entergy agreed to join a regional power grid, MISO, to expand access to electricity on other utilities' systems. But there's only one transmission lane connecting the Entergy grid to MISO member utilities in northern states.

New Orleans-based clean energy consultant Andy Kowalczyk said Entergy pursued a deal to sell off its transmission system, but it was so costly the Mississippi Public Service Commission rejected it. He said Entergy also appeared to select MISO over another regional power grid because it had fewer connections to the rest of the grid.

Kowalczyk said that allowed Entergy to keep full control over the vast majority of power generation and the transmission in the South.

"The worst thing that you want happening is a utility that's building transmission to service more people from their power plants ... where they're only enhancing their own market power and they're not connecting to outside regions with perhaps more competitive options," he said.

Moreno sent a letter to MISO, the regional power grid operator, urging it to press its member utility, Entergy, to do more to fix its system and not pass on costs to ratepayers.

In addition, former Federal Energy Regulatory Commission member John Norris told the MISO board last week that he approved Entergy joining MISO because it was supposed to expand transmission corridors to other parts of the regional grid, but never did.

Moreno sent a letter Monday to MISO, asking the regional power grid operator to use its influence, to – quote – “ensure that transmission solutions for the New Orleans area are adopted in 2022.”

But she says other, larger regulators, including the Louisiana Public Service Commission, its counterpart agencies in Mississippi and Arkansas and FERC at the federal level, must step up to join the New Orleans City Council.

"There needs to be significant reforms, in my opinion, with this corporation and how it operates,” Moreno said. “But look, we're just New Orleans. We are probably the smallest regulator dealing with the smallest piece of the Entergy Corporation, Entergy New Orleans.”

Lawsuit quotes Entergy Louisiana CEO Phillip May’s statement to me @WWLTV that the rusty River Tower that collapsed in Avondale was “very robustly engineered” and didn’t need to be replaced. https://t.co/A843c2Q9T0