Blog updates as news happens on Tropical Storm Gordon as it impacts the northern Gulf Coast. This story will be updated with the latest information available.

NEW ORLEANS - People along the Louisiana and Mississippi coasts braced Tropical Storm Gordon, which made landfall Tuesday night near the Mississippi/Alabama state line. Here is the latest information on the storm:

Download the WWL-TV app to keep up with breaking news

The Mississippi Gaming Commission announced that casinos along the coast will close no later than 5 p.m. The Harrison County sheriff, meanwhile, has announced a curfew will be in effect from 7 p.m. until 7 a.m.

Jefferson Parish was at 100 percent pump capacity on Tuesday afternoon as Tropical Storm Gordon continued to swirl toward the Mississippi coast. Jefferson Parish President Mike Yenni said during an afternoon update that parish officials were still monitoring the storm but did not expect any major effects. Emergency Director Joe Valiente said winds could be 35-40 MPG in the metro area between Tuesday afternoon and Wednesday morning. He said 1 to 3 inches of rain is expected, but officials did not expect more than 7 inches of rain to fall on the area. 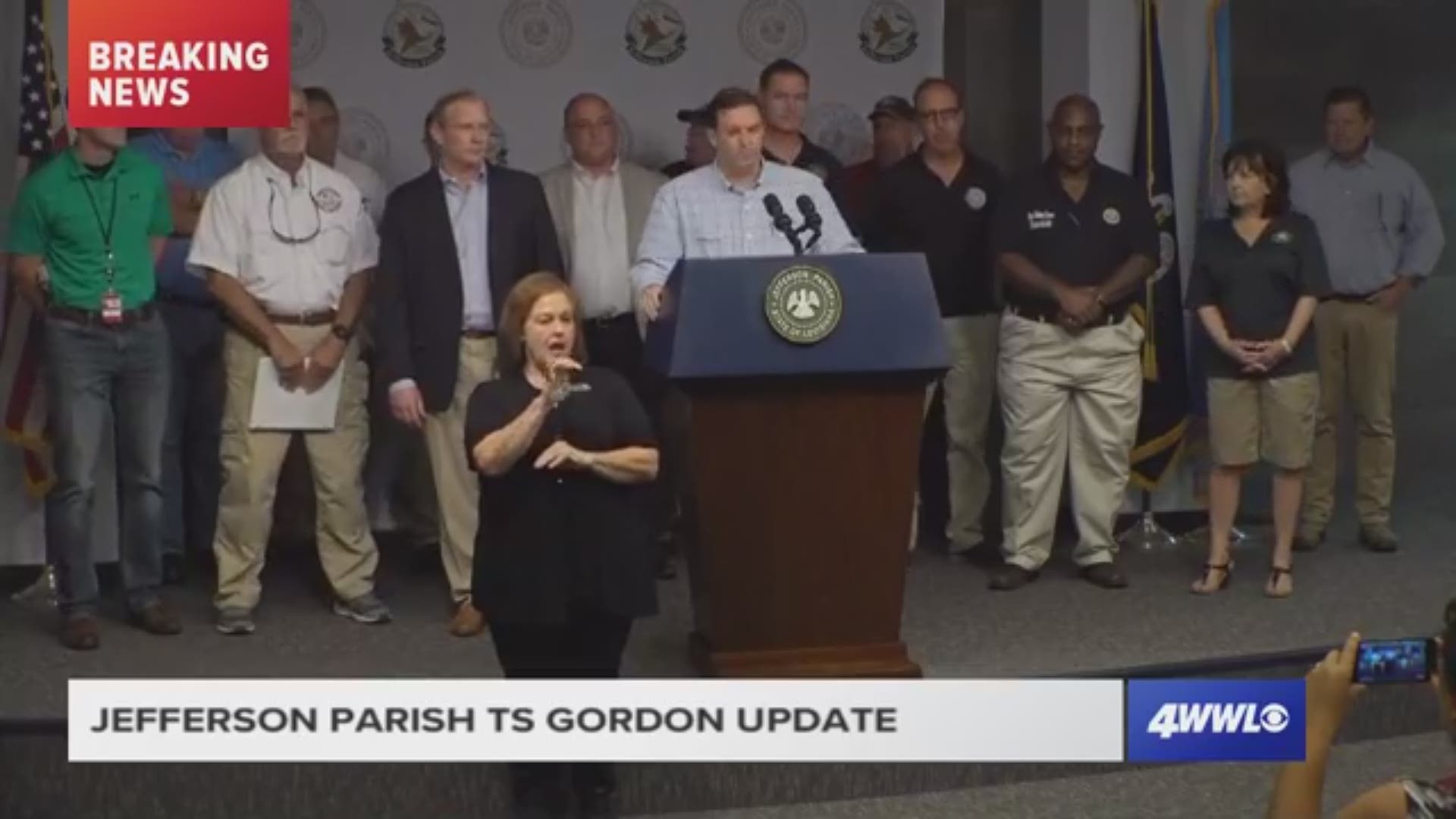 Tropical Storm Gordon was still expected to become a weak Category 1 hurricane by the time it hit the Mississippi coast sometime between 9 p.m. and 10 p.m. Tuesday. Winds were still about 65 mph Tuesday afternoon when the storm was about 145 miles southeast of Biloxi, Mississippi. The storm is expected to make landfall near Biloxi and Gulfport. Hurricane force winds would be limited to that area and only extend out about 15 to 20 miles. Tropical storm force winds could extend to about 80 miles. In the metro New Orleans area, the northshore was expected to feel some wind effects but fewer effects were expected on the southshore.

City leaders on Tuesday said they did not expect Tropical Storm Gordon to significantly affect the area but were keeping a cautious eye on the system nonetheless. Mayor LaToya Cantrell said city workers spent the weekend making sure city infrastructure could handle whatever rain the storm might dump. As a precautionary measure, cars can be parked on the neutral ground beginning at 2 p.m. The main concern, Cantrell said, would be wind spees and rainfall. Cantrell asked for people who do not have emergencies to call 311. She added that street flooding is considered an emergency and that anyone who sees any roadways underwater should call 911.

St. Tammany Parish President Pat Brister was cautiously optimistic Tuesday as Tropical Storm Gordon continued on a path that appeared to have it skirting the area. “It looks like this might be a mild storm,” she said. “We hope so.” Brister said the parish is well-prepared and has good protocols in place. She asked for residents to clear out catch basins so whatever rain hits the area can quickly drain. The parish handed out 40,000 sandbags Monday, Brister said, and that process would continue through at least 5 p.m. Tuesday. But it could be extended until 7 p.m. if necessary, Brister said.

All Jefferson Parish Public School System schools and administration buildings will be closed Wednesday, September 5,2018 due to the unknown overnight impact of Tropical Storm Gordon. JPPSS students and employees should not report to school or work on September. 5. All JPPSS schools and administration buildings will reopen on their normal schedule Thursday, September 6 after our emergency management and facilities teams have assured safe conditions for students and employees.

“We encourage residents to stay up-to-date on the forecast, and to cooperate with requests from emergency officials,” Brister said. “As this storm makes landfall we ask everyone to stay off of the streets if it is not necessary for you to be out, and to obey any traffic signs and barricades indicating impassable roads and high water. We will continue to monitor the storm and share information over Social Media, our website and through the local news media.”

10:20 AM - Tropical Storm Gordon strengthening as it closes in on Mississippi coast 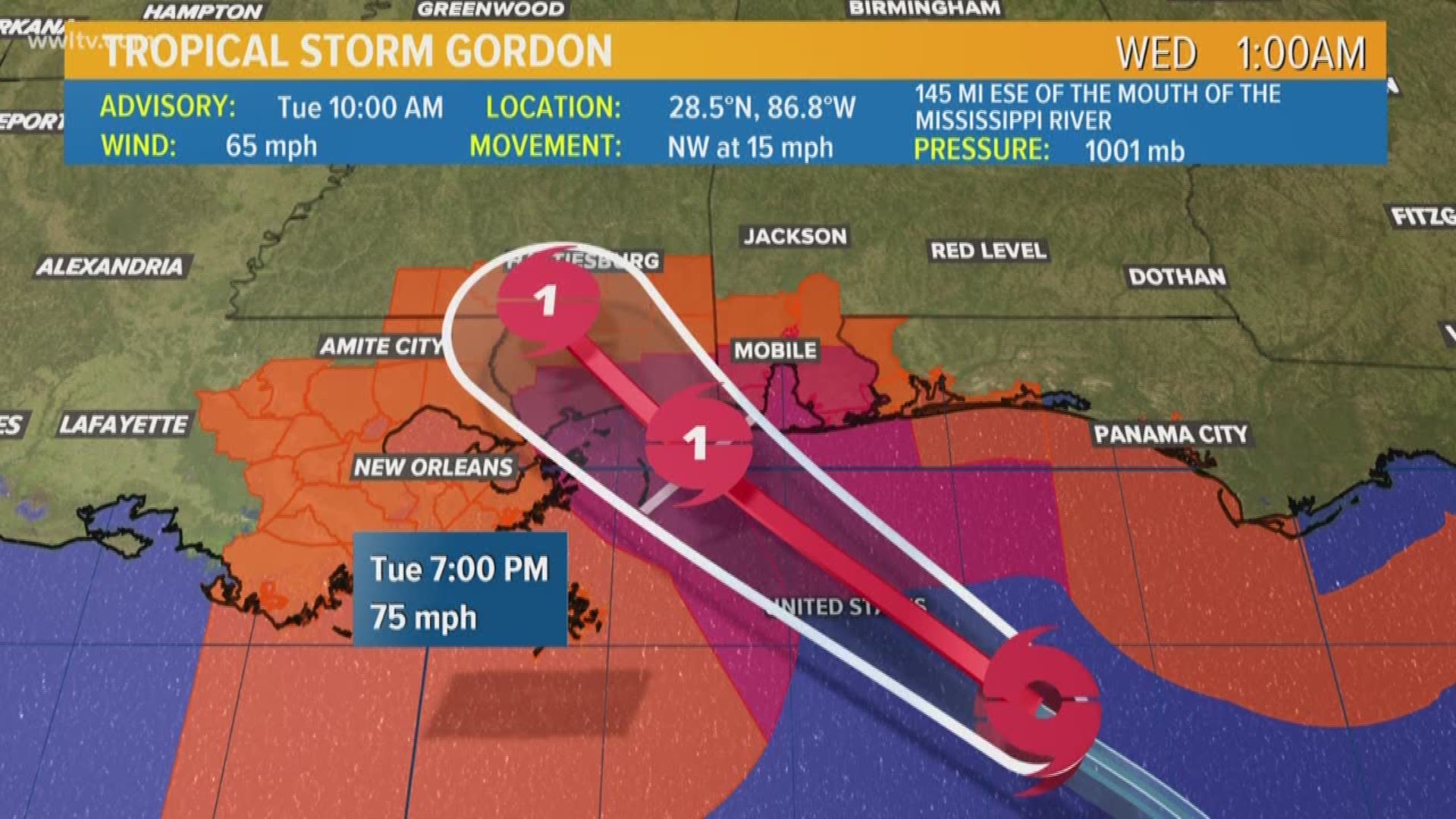 The 10 a.m. advisory from the National Hurricane Center shows that a dropping pressure, which means the storm is strengthening as expected before making landfall. Winds remain at 65 mph. Gordon is expected to make landfall as a Category 1 Hurricane sometime between 9 p.m. to 10 p.m. Tuesday night. (Read more)

9:15AM - University of New Orleans to cancel classes after 2 p.m.

Due to Tropical Storm Gordon, the University of New Orleans will cancel all classes that start Tuesday after 2 p.m. At that time, all non-essential personnel will be released for the day.

8:40 AM - Update on Louisiana's preparedness before Gordon's landfall 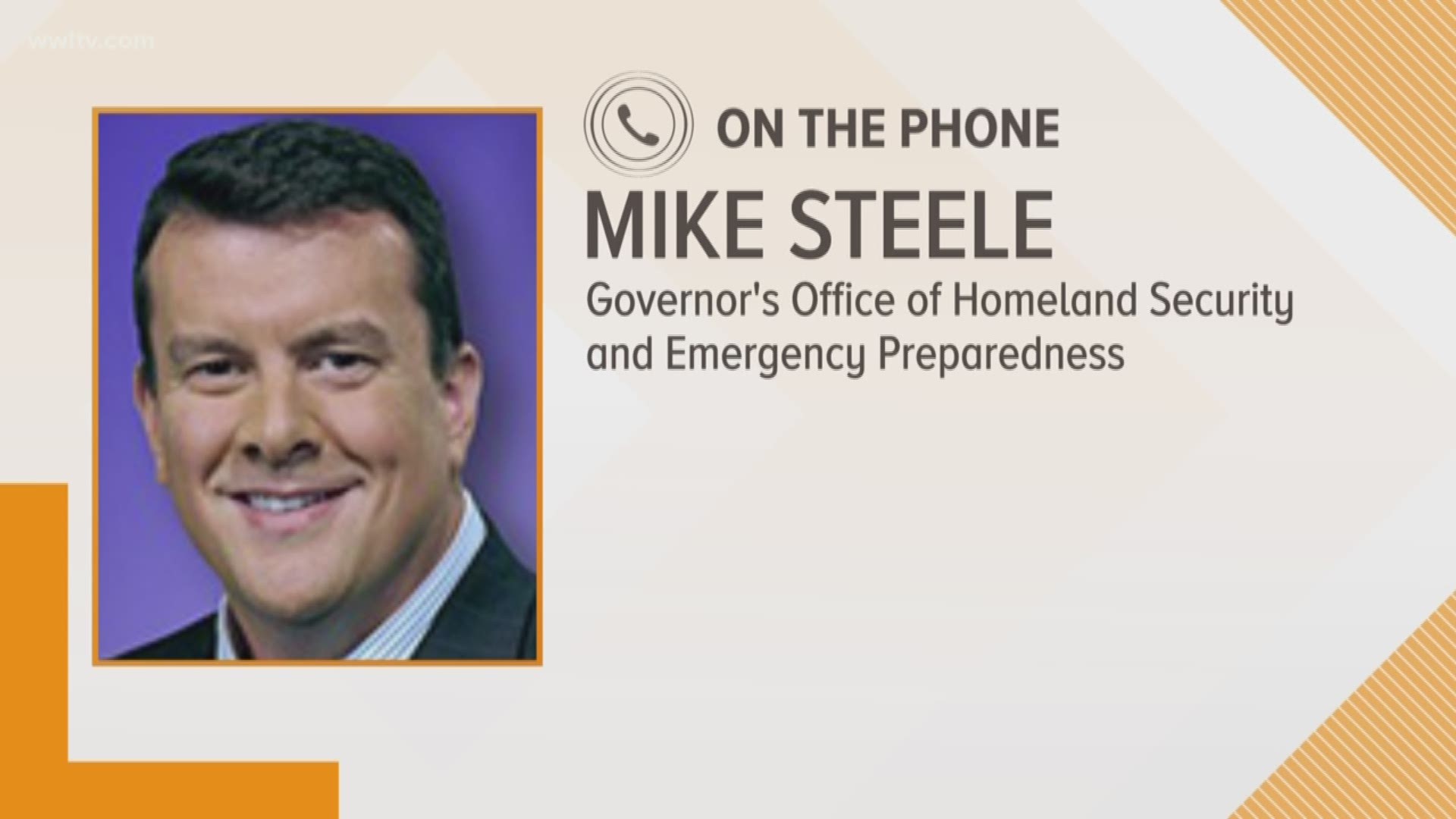 8:20AM - Mississippi coast cautious, but prepared for Gordon 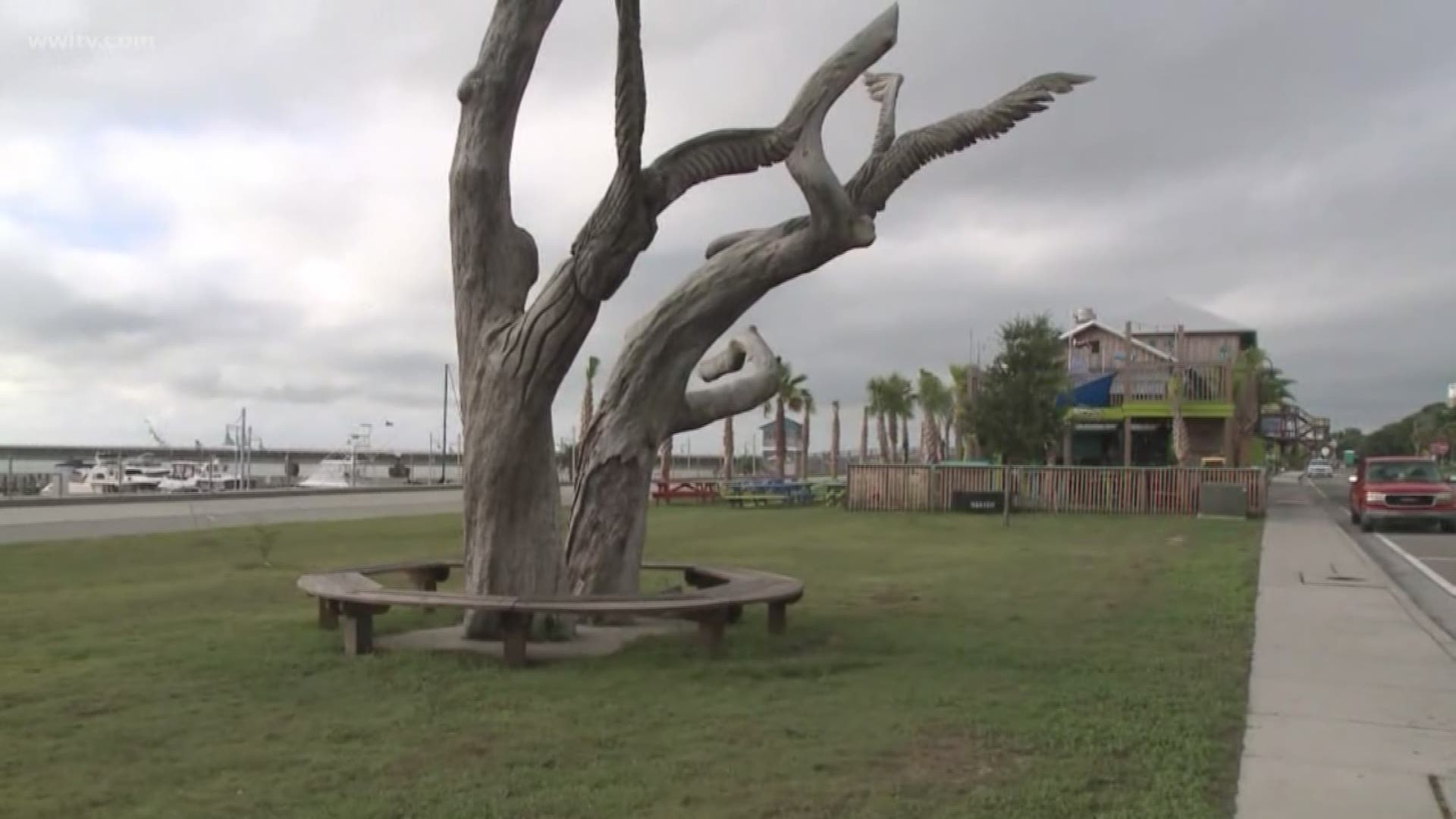 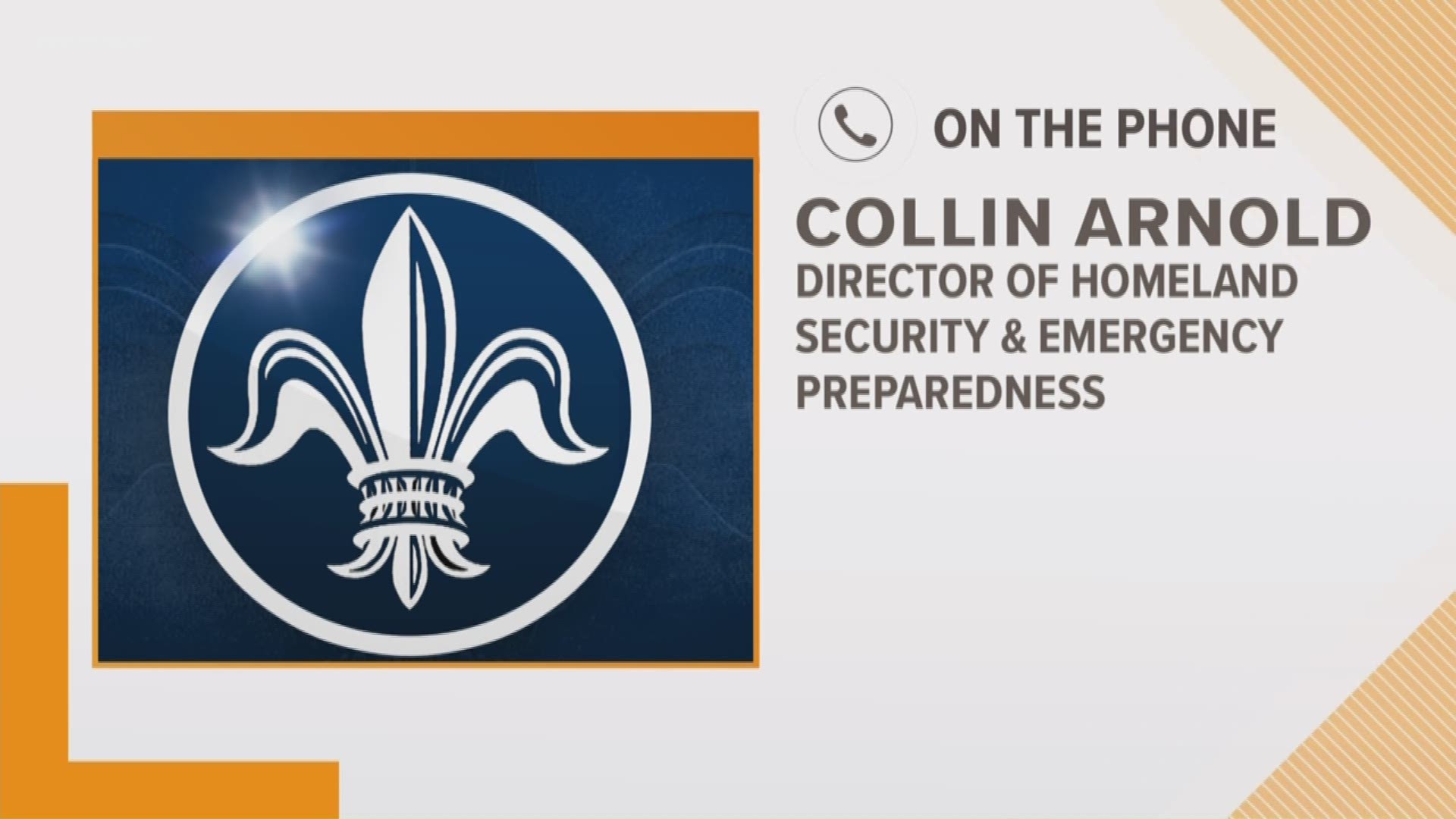 7:50AM - Gordon expected to make landfall as hurricane around 9 p.m. Tuesday 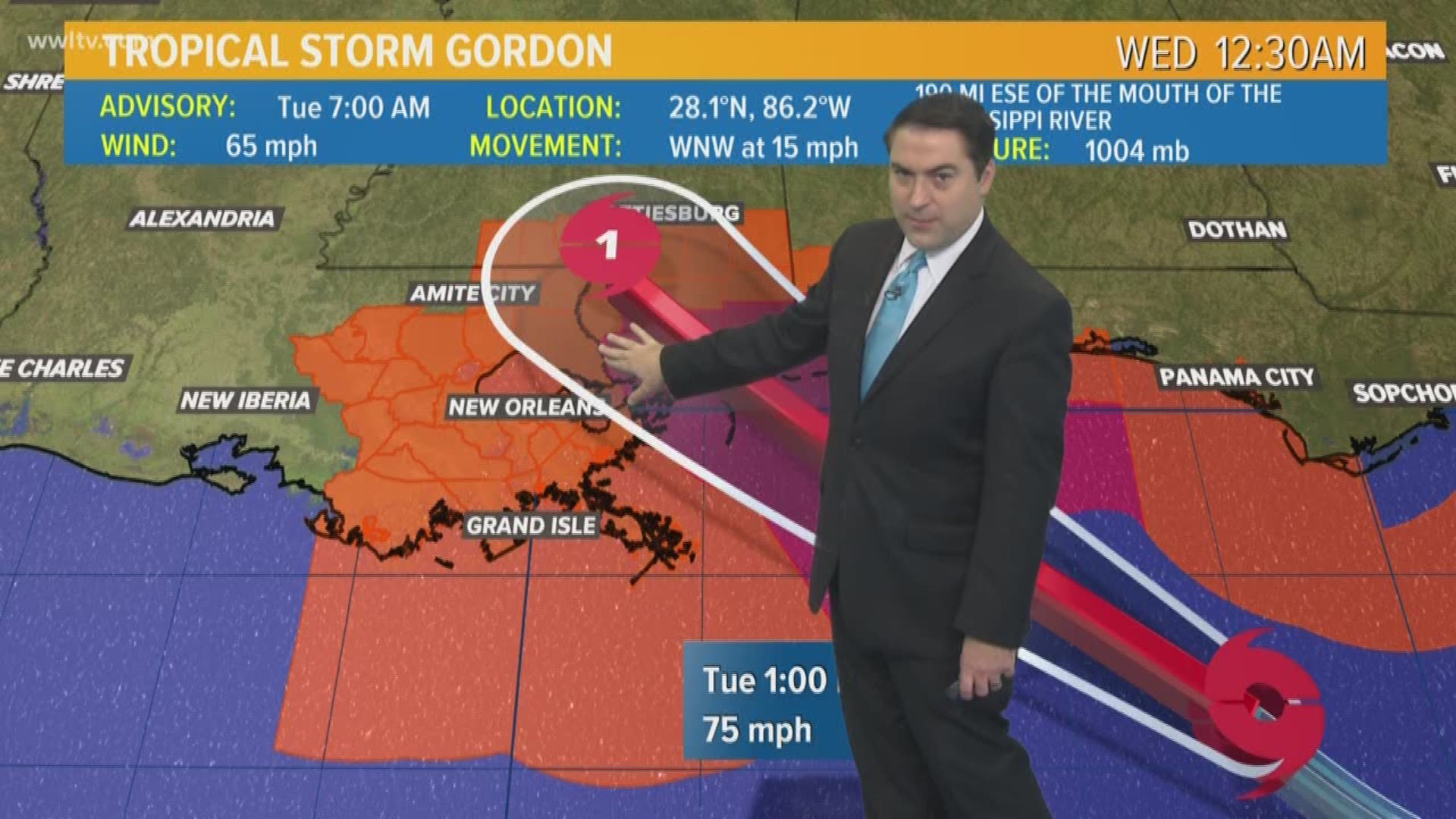 7:25AM - Hancock County: residents in low lying areas should get ready 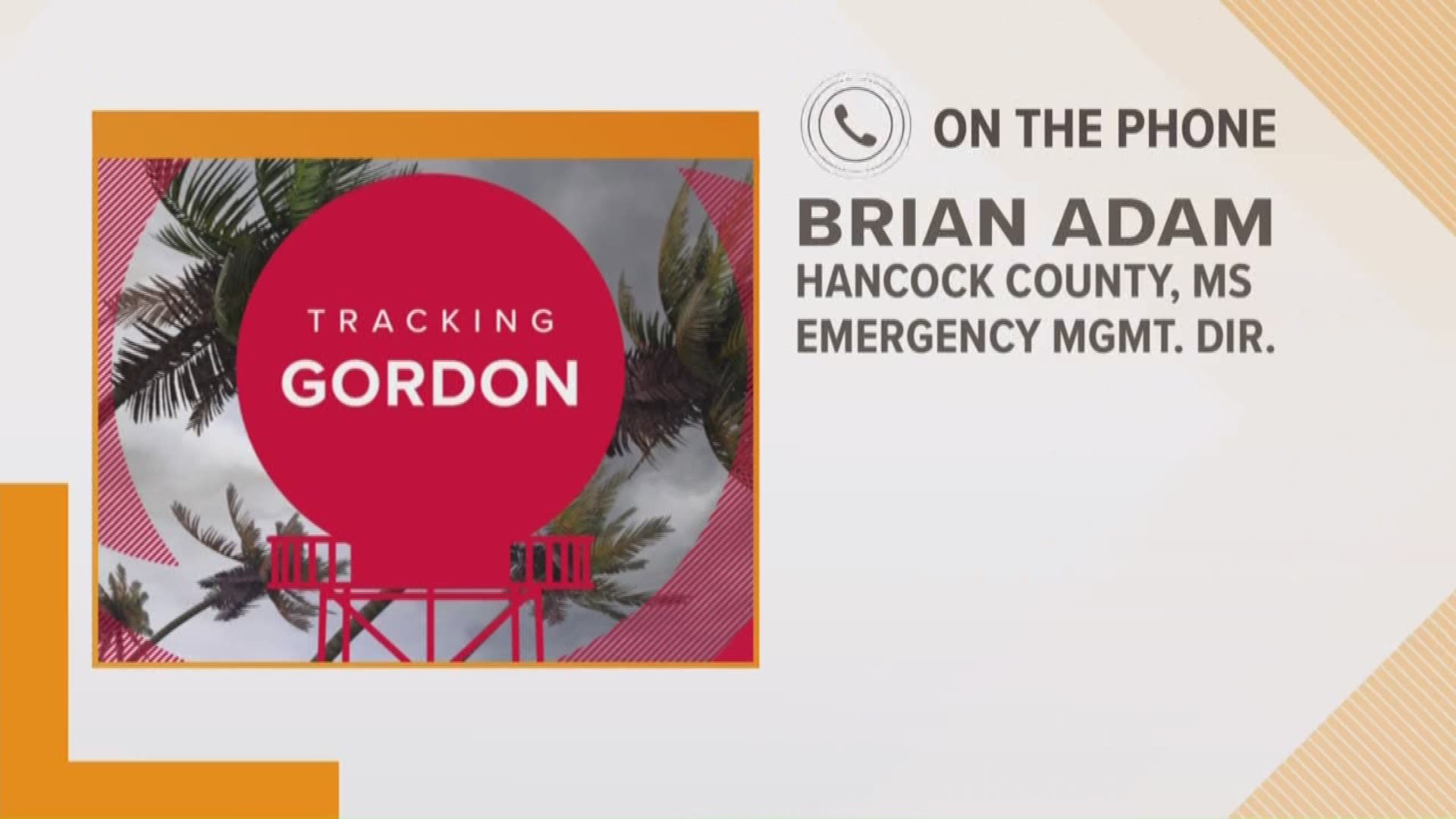 Residents who live in low lying areas of Hancock County are asked to take extra precautions as the county prepares for a direct strike from Tropical Storm Gordon. Hancock County Emergency Management Director said residents are in good spirits as they brace for a strike from a possible hurricane. 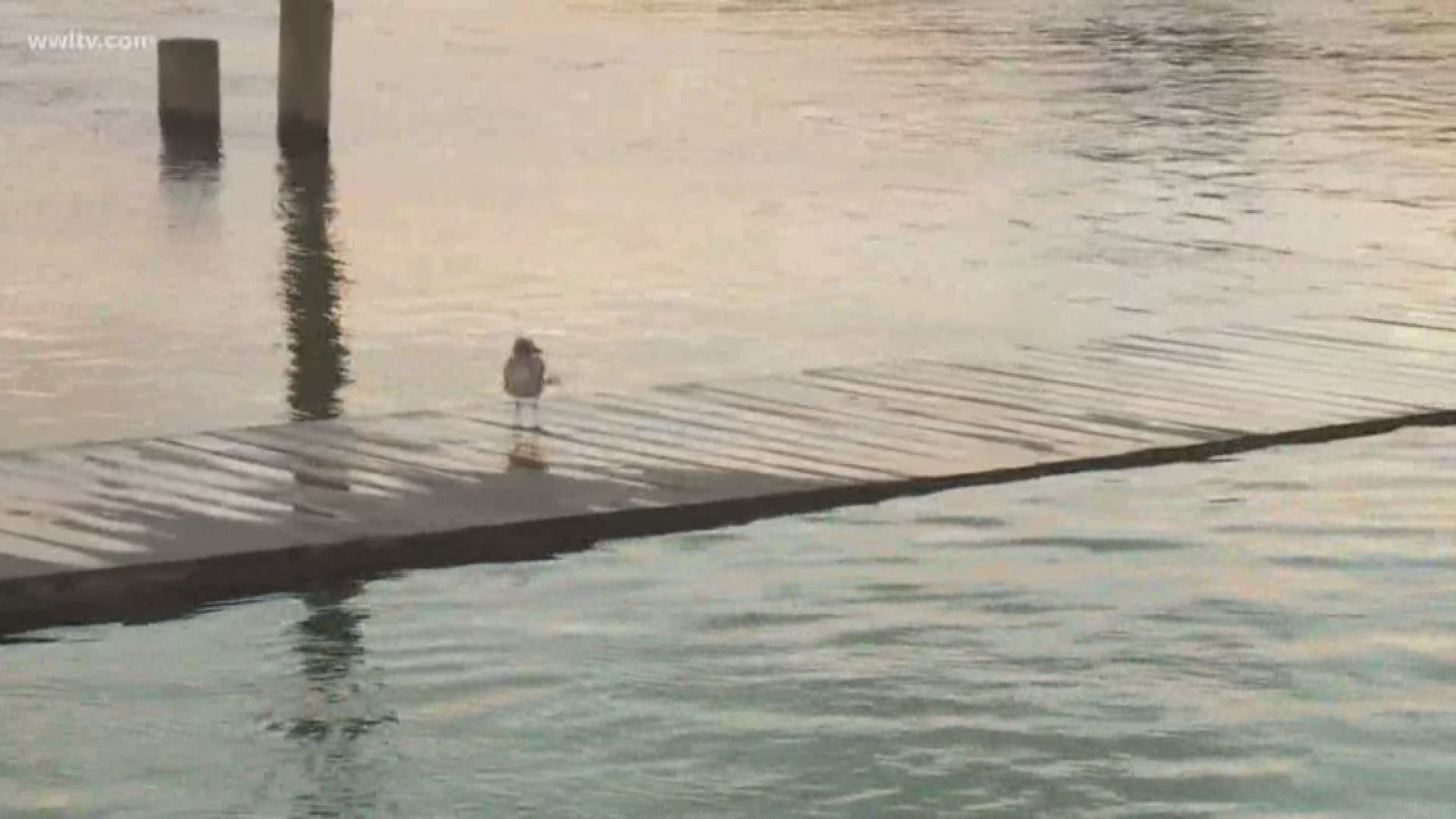 St. Tammany Parish officials say more than 9,000 sandbags were given out to residents across the parish Monday ahead of Tropical Storm Gordon. Crews will continue to distribute sandbags Tuesday, but each resident is only limited to 25 sandbags.

6:40 AM - Jefferson Parish: pumps and drainage are ready for Gordon 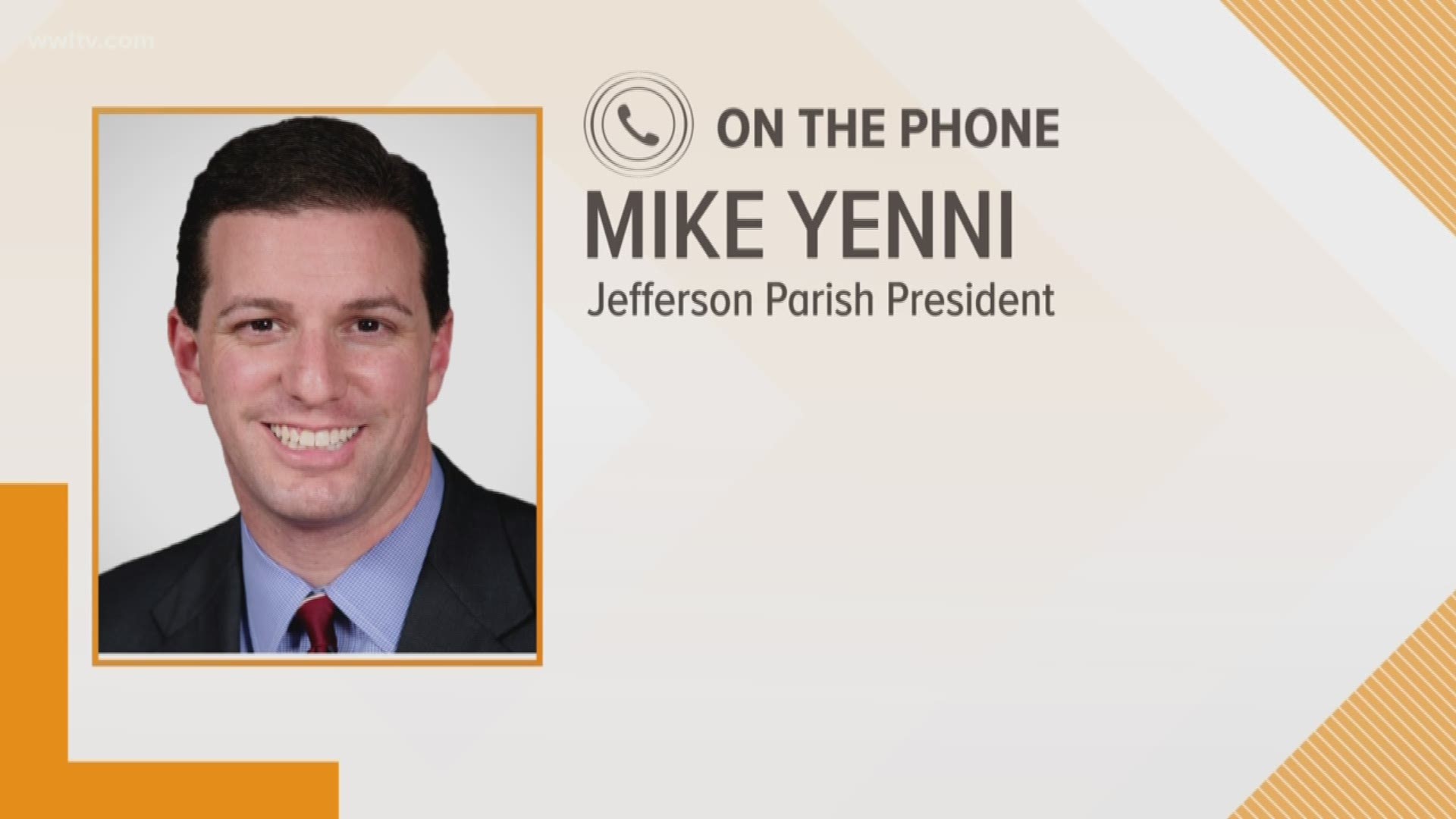 Parish President Mike Yenni says 183/184 pumps are ready to go to defend from any rain that appears in Jefferson Parish. Crews will work through the night to make sure drainage lines are cleared ahead of Gordon's landfall. Sandbags are being placed to protect residents in low lying areas.

6:25AM - Plaquemines Parish: Our biggest concern is storm surge 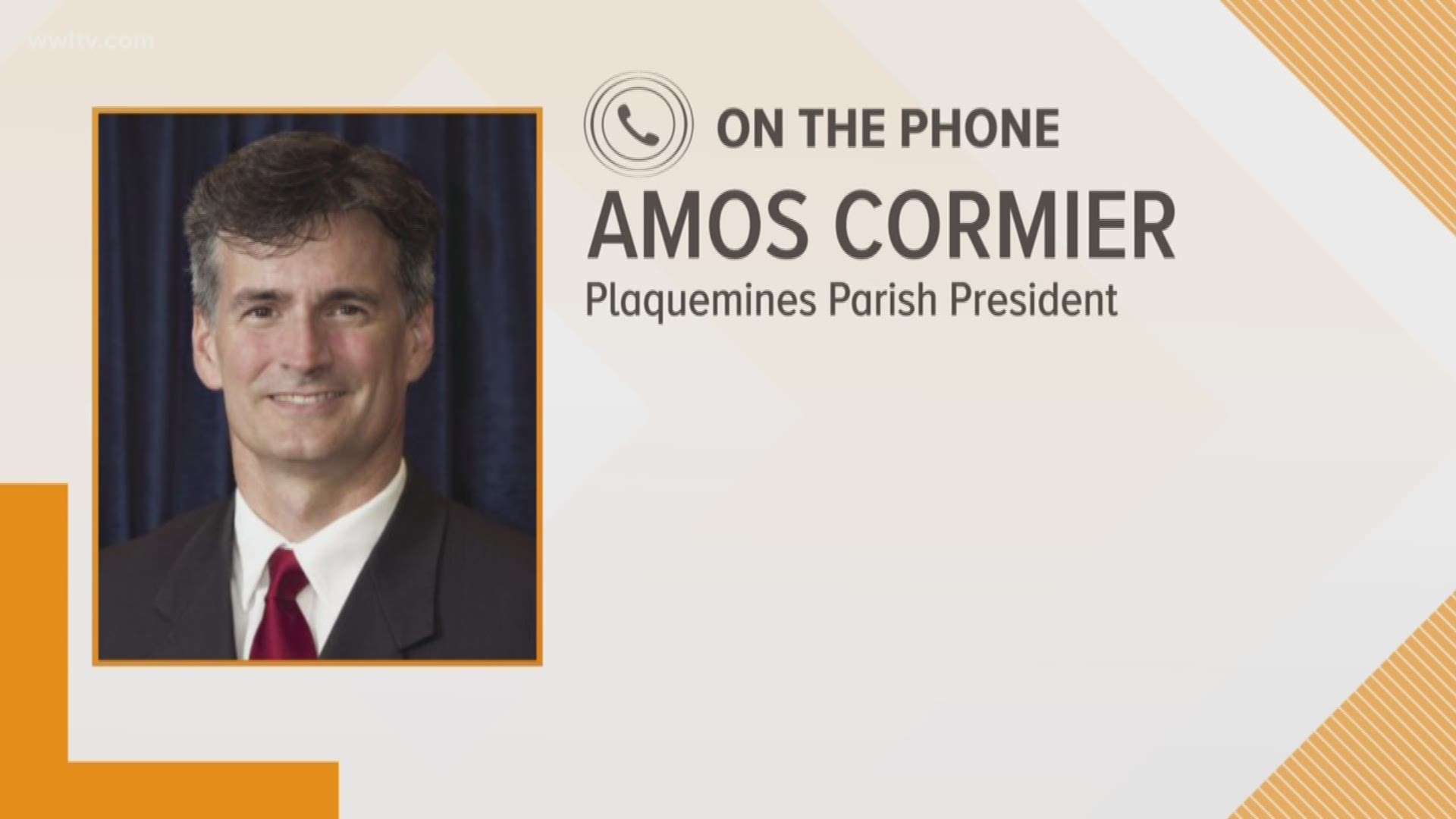 6:15AM - St. Bernard Parish residents: rather be safe than sorry 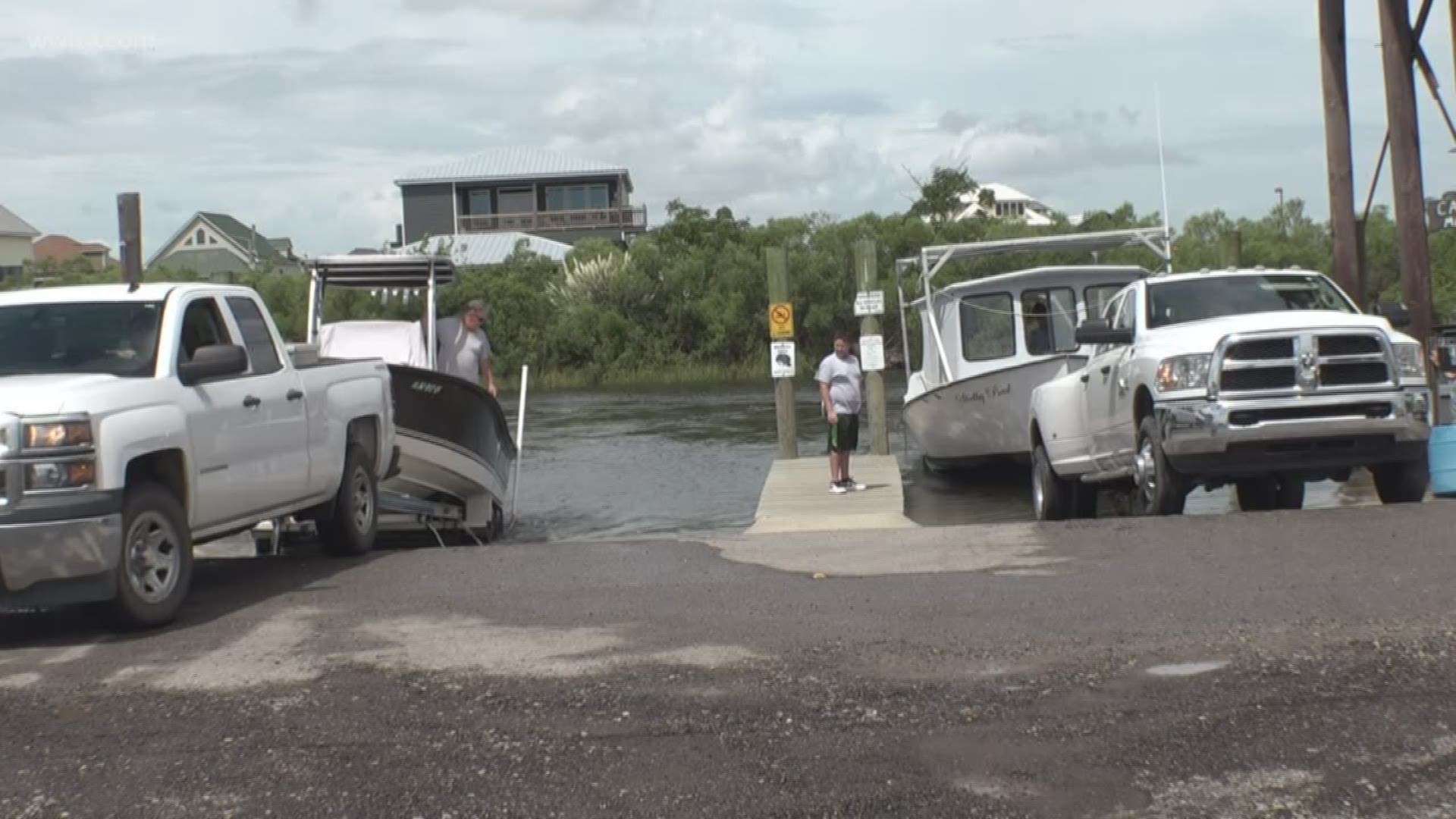 Monday morning, residents in St. Bernard Parish began pulling their boats out of the water ahead of Tropical Storm Gordon. Most residents say they do not expect Gordon to be as bad as Issac in 2012, but they are still taking steps to protect their property.

The main concern is wind, with a chance of sustained winds in the 40-50mph with gusts up to 70 mph.

Storm surge in the parish is expected to get up to 3-5 feet.

6:10AM - St. Tammany Parish continues to distribute sandbags ahead of Gordon 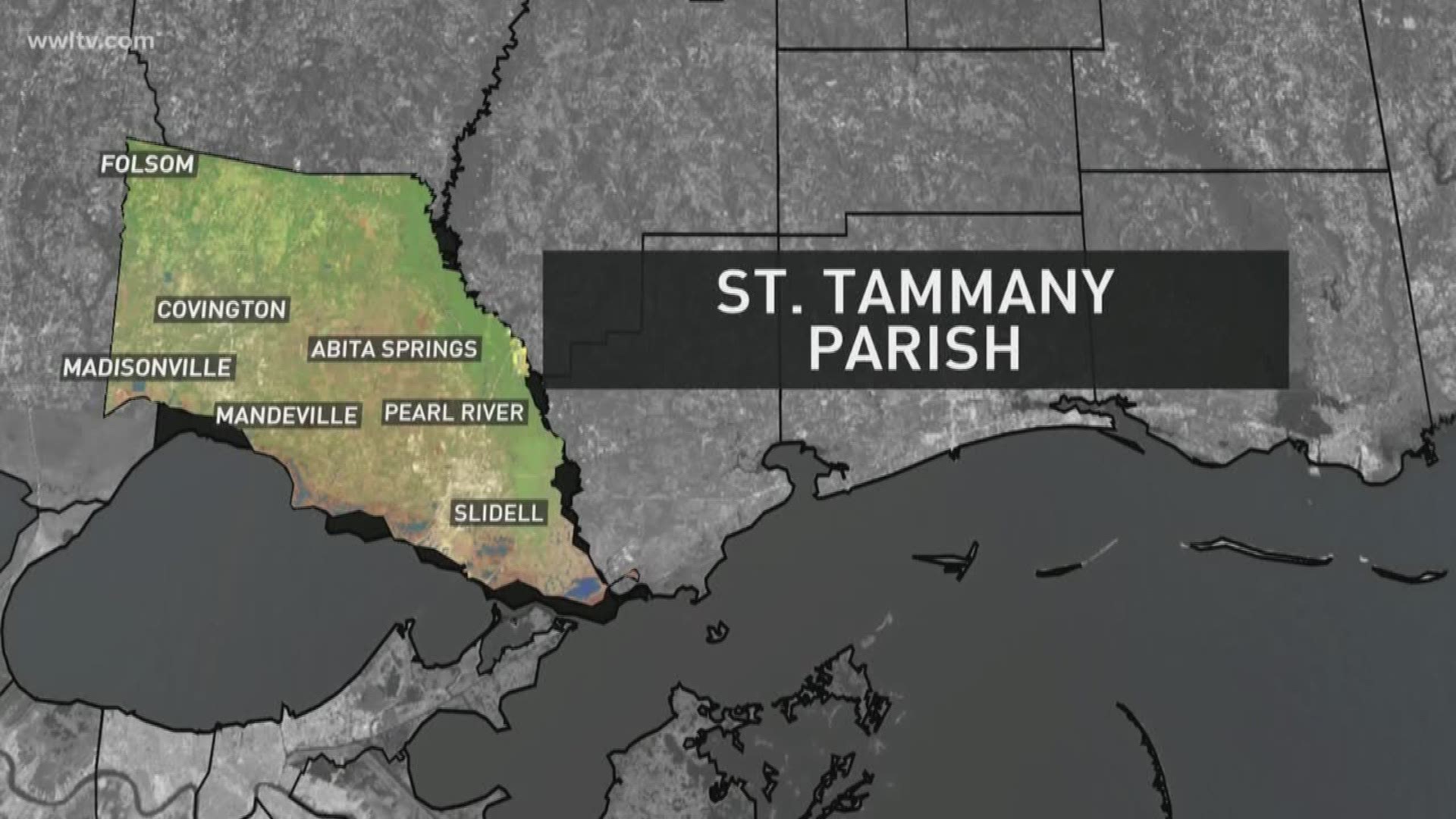 6 AM - Mississippi coast braces for Gordon's landfall as Hurricane

Residents along the Mississippi Gulf coast, especially in those in low lying areas, are preparing for Gordon to make landfall as a Category 1 hurricane. Emergency crews are headed to the coast Tuesday ahead of the storm. WWL-TV reporter Jacqueline Quynh reports from Biloxi, Mississippi.

The latest forecast track still has Gordon making landfall Tuesday night between 7 and 10 p.m. near Biloxi, Mississippi as a Category 1 hurricane. That would place the metro New Orleans area on the better side of the storm, which could lead to a fairly nice day Tuesday locally. (Read more)