While the storm's current track is good news for southeast Louisiana, there is still a threat from storm surge and high winds.

NEW ORLEANS — Hurricane Sally formed Monday morning, rapidly intensifying from 65 to 90 mph half a day before forecasters believed the storm would become a hurricane. But by Tuesday morning, Louisiana appears to have dodged the worst of the storm.

Sally was downgraded to a Category 1 storm overnight, after undergoing a rapid intensification Monday morning and afternoon.

According to the latest data, Sally will likely make landfall along the northern Gulf Coast, bypassing Louisiana entirely. While that is good news for southeast Louisiana, there is still a threat from storm surge and high winds.

Here are the latest updates:

NOLA-PS, the governing body for public schools in New Orleans, said distance learning would begin Wednesday. That start date is two days later than originally scheduled, because instruction was canceled out of fear that Hurricane Sally would knock out power, leaving students and teachers in the dark during class.

Mayor LaToya Cantrell said the city of New Orleans would assist Alabama and Mississippi with tactical and remote dispatch services as needed when Hurricane Sally strikes the coast.

Cantrell said in New Orleans, the city would begin returning to normal, with Wednesday trash pickup resuming as usual.

Parking restrictions will be put back in place at 8 a.m. Wednesday.

St. Bernard Parish is still dealing with the threat of flooding, but is putting mitigation measures into place to prevent damage.

Sandbags have been placed by the parish's department of public works on the Delacroix Highway to slow down the water so pumps can work to remove it fast enough.

Department of public works and road crew place sandbags on Delacroix highway to slow the water down so pumps can keep up. #hurricanesally pic.twitter.com/OIEnFfLSqO

In Plaquemines Parish, a mandatory evacuation order for the parish's Westbank was lifted Tuesday morning.

All St. John Parish schools will resume classes Wednesday, after closing in preparation for Hurricane Sally.

With the storm forecasted to move east and away from the Louisiana coast, local impacts are expected to be lessened.

The 10 a.m. update from the National Hurricane Center released a few minutes early Tuesday, showing an even more eastbound track for Hurricane Sally that puts less rain and storm surge along the southeast Louisiana coast.

The Tropical Storm Warning for New Orleans has been discontinued. A Hurricane Warning for the southeast Louisiana area was ended earlier Tuesday morning.

The storm is expected to make landfall in Mississippi as a Category 1 hurricane.

Parish President Robby Miller said his staff is still concerned about the conditions on Lake Pontchartrain, which could still surge because of Sally.

A voluntary evacuation order remains in place in the parish, but Miller said residents in the affected areas know how to handle hurricanes and will be able to make the call on when to return themselves.

Bay St. Louis is starting to feel the effects of Hurricane Sally, as storm surge pushes water into the area.

Sally is expected to reach the Mississippi Coast sometime in the next few days, with heavy rain starting sometime Tuesday.

A video from a Bay St. Louis pier shows the conditions this morning. Video courtesy of Dave Robison. 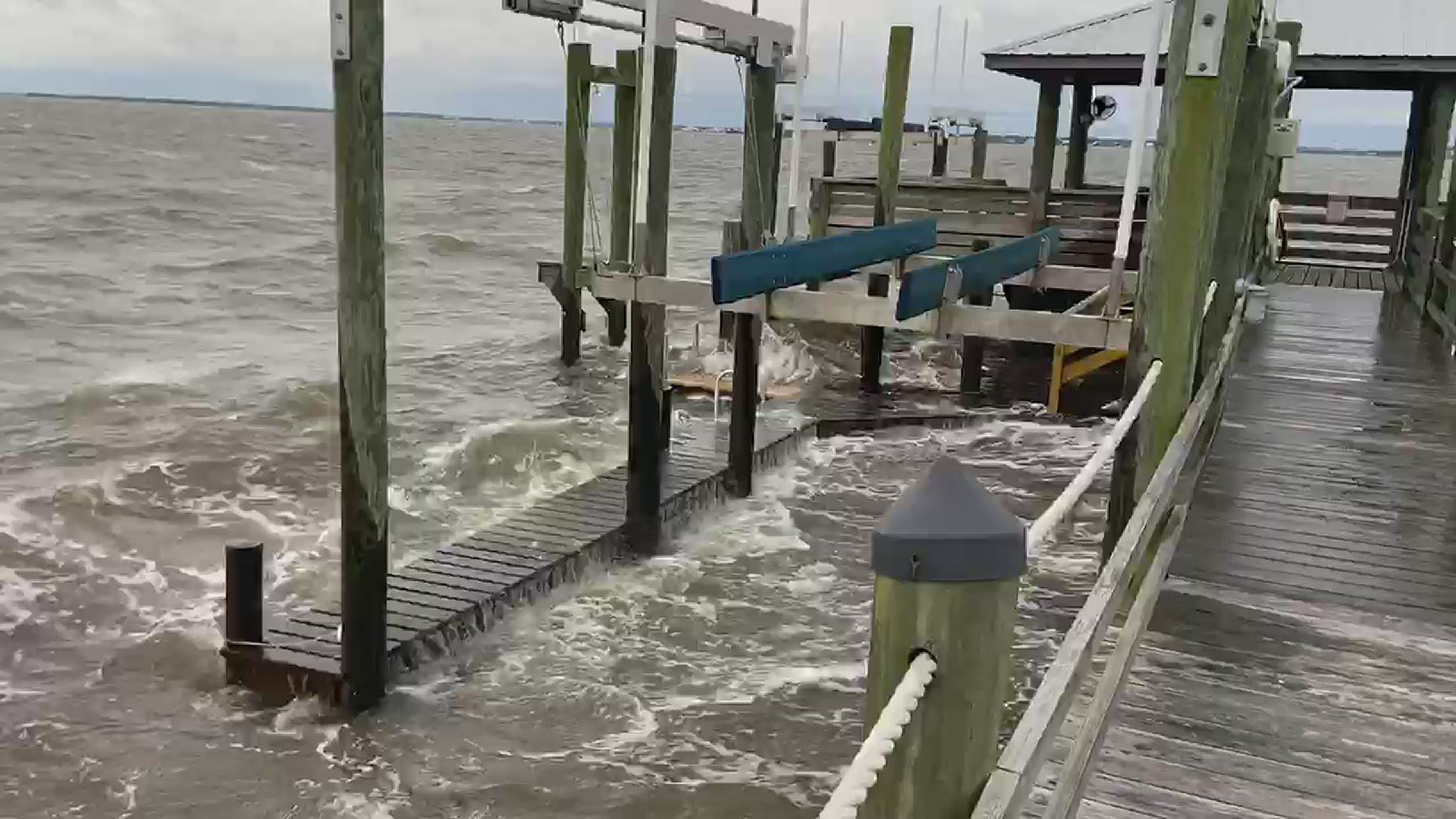 Evacuation orders have been lifted for St. Charles Parish, officials said Tuesday. The entire parish was under a mandatory evacuation order headed into the week because of the severe threat posed by Sally's possible path through Louisiana over the weekend.

But Sally's newer paths put it too far east to require the expansive evacuation order.

Even when it was issued Sunday, parish officials said they expected most people to stay and ride the storm out in their homes.

Lafourche Parish President Archie Chaisson told WWL-TV Tuesday morning that most of the parish's evacuation orders would be lifted by noon.

Officials are monitoring parts of Highway 1 because there is some water on the road, but are still waiting for high tide in the next few hours to determine how much the water will rise and if they will need to close the road.

Ominous skies are blanketing Bay St. Louis in Mississippi as residents there wait for rain from Hurricane Sally. The storm is expected to start dumping water on the coastal area later today, with landfall sometime in the next few days.

Water levels in Bay St. Louis are already rising from the storm surge caused by Sally.

Out of an abundance of caution, the Jefferson Parish COVID-19 testing site at the Alario Center is closed Tuesday because of Hurricane Sally.

Testing sites around southeast Louisiana were closed Monday and Tuesday because of the threat posed by Sally. While officials aren't expecting a direct hit from the hurricane to the area, its slow-moving path is causing storm surge along large portions of the Gulf Coast.

ICYMI: The Alario Center drive-thru COVID-19 testing site is CLOSED today, Tuesday, September 15th due to Hurricane Sally. We will keep the public updated on our reopening plans ASAP. pic.twitter.com/QsGd9EoKeR

Evacuation orders have been lifted for all parts of St. John the Baptist Parish.

Officials announced the lifting of evacuations Tuesday morning as they continued to track Sally's path.