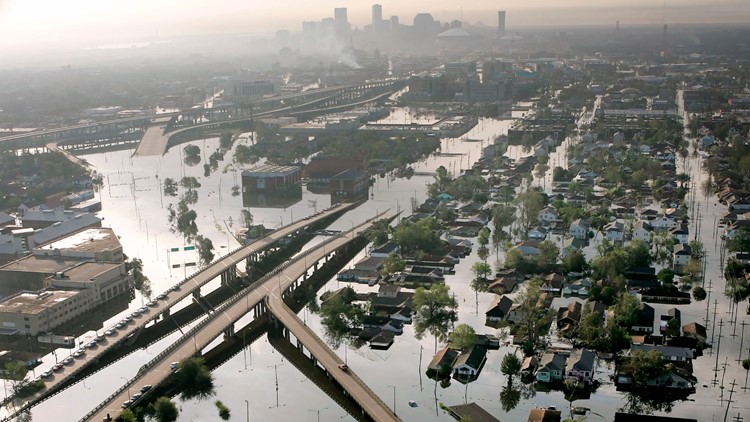 Photo by: AP
FILE - In a Aug. 30, 2005 file photo, floodwaters from Hurricane Katrina fill the streets near downtown New Orleans. The most destructive U.S. hurricanes are hitting three times more frequently than they did a century ago, a new study by a Danish research team said Monday, Nov. 11, 2019. (AP Photo/David J. Phillip, File)

Most destructive hurricanes are hitting US more often

WASHINGTON — Big, destructive hurricanes are hitting the U.S. three times more frequently than they did a century ago, according to a new study.

Experts generally measure a hurricane's destruction by adding up how much damage it did to people and cities. That can overlook storms that are powerful but hit only sparsely populated areas. A Danish research team came up with a new measurement that looked at just how big and strong the hurricane was, not how much money it cost. They call it Area of Total Destruction.

"It's the most damaging ones that are increasing the most," said study lead author Aslak Grinsted, a climate scientist at the University of Copenhagen. "This is exactly what you would expect with climate models."

Looking at 247 hurricanes that hit the U.S. since 1900, the researchers found the top 10 percent of hurricanes, those with an area of total devastation of more than 467 square miles, are happening 3.3 times more frequently, according to a study in Monday's Proceedings of the National Academy of Sciences.

Eight of the 20 storms with the highest area of total destruction since 1900 have happened in the last 16 years, a much larger chunk than would randomly occur, Grinsted said.

Climate scientists have predicted and shown that higher temperatures in the oceans and the atmosphere, a result of burning coal, oil and other fuels, is creating more extreme weather and storms.

"Their result is consistent with expected changes in the proportion of the strongest hurricanes and is also consistent with the increased frequency of very slow-moving storms that make landfall in the U.S.," said National Oceanic and Atmospheric Administration hurricane scientist Jim Kossin, who was not part of the research.

Other experts weren't so convinced, however. Colorado State University hurricane scientist Phil Klotzbach says his review of the most powerful storms to hit the U.S., using barometric pressure, shows no increase.