"(A) life-threatening storm, is what we're being told," Cantrell said. "There's a range of ways the storm can affect us." 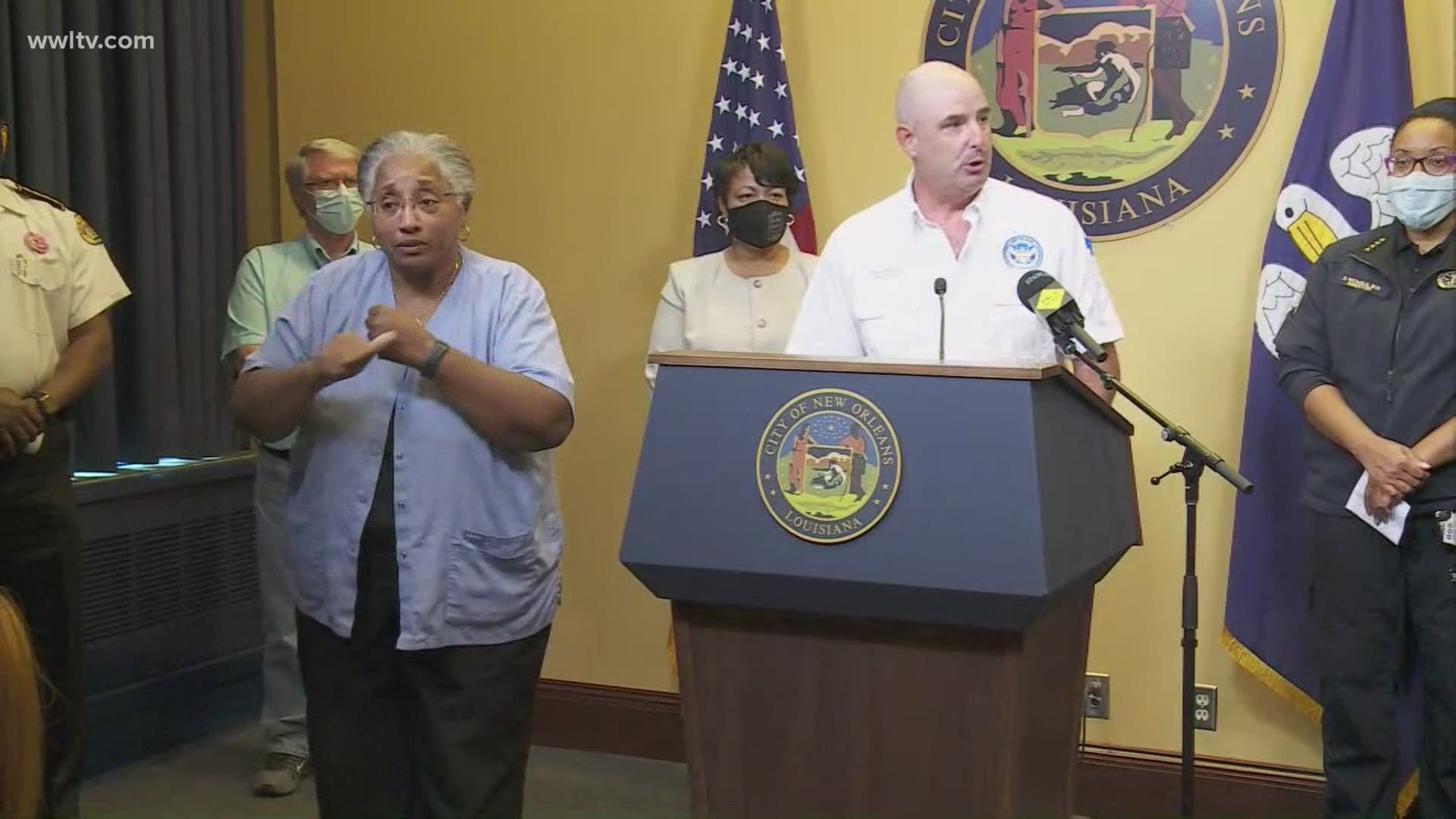 NEW ORLEANS — New Orleans public safety leaders are watching Hurricane Delta's progress towards the southern U.S. coast with a mixed sense of determination and dread ahead of the storm's projected Friday landfall.

At a Tuesday press conference, Mayor LaToya Cantrell urged residents to prepare early because Delta is predicted to move quickly through the Gulf of Mexico towards Louisiana.

While there is still a large cone of uncertainty around the storm's future track, it has begun to focus on Louisiana, with the centerline just to the west of New Orleans.

If the storm takes a path roughly similar to the National Hurricane Center's centerline prediction, it would put New Orleans and much of the metro area on the eastern "wet" side of the storm, where more rainfall would fall.

Delta has escalated quickly, from a tropical depression Monday morning to a strong Category 4 Hurricane as it neared the border of the Caribbean Sea and the Gulf Tuesday afternoon.

"The impact is expected as early as Friday morning," Cantrell said. Some rain could drop on the metro area as early as Thursday, but most predictions put the storm into Louisiana sometime Friday afternoon.

Even though the storm is expected to weaken to a Category 3 by landfall, it will still bring dangerous winds, rain and storm surge.

"(A) life-threatening storm, is what we're being told," Cantrell said. "There's a range of ways the storm can affect us."

Collin Arnold, the city's Homeland Security Director, said the quick pace of the storm will likely keep it from becoming a serious-enough threat to the city that evacuation orders would need to be called for areas protected by levees.

"We are not seeing the impacts that would indicate an evacuation scenario," Arnold said. City officials are expecting that they will need to issue mandatory evacuation orders for low-lying areas outside the levees, such as the Venetian Isles and Irish Bayou.

But those evacuations haven't been ordered yet because city leaders are still waiting for more accurate data from the National Weather Service.

Traditionally, any evacuations or significant storm prep starts at the government level 60 hours before a storm's projected landfall. But because Delta formed and developed so quickly, that 60-hour mark was already in the rearview mirror Tuesday afternoon.

"Normally we will begin at hour 60. That wasn't an option at all," Cantrell said. "This could easily change."

An evacuation decision for the New Orleans metro area, including surrounding parishes, would need to be made at least 40 hours before the storm's projected landfall.

Cantrell said she would make that decision with nearby parish leaders, but that decision would need to be made sometime Wednesday in order to safely evacuate the area's 1.2 million residents.

But even if New Orleans doesn't evacuate, it could still see significant rain, which means street flooding. Delta is expected to drop an average of 4 to 6 inches, and some areas could see more than double the average rainfall.

Bob Turner, the general superintendent for the Sewerage & Water Board of New Orleans, said the agency was prepared to ride out the storm.

Ninety-eight of the city's 99 drainage pumps were operational Tuesday afternoon, and crews are expected to bring the last one online before the storm hits. But even at full capacity, those pumps can only drain an inch of water in their first hour of operation and a half-inch every hour after.

Three of the turbines that power the city's antiquated water-drainage system are operational, with a fourth ready for an emergency. All five of the city's backup EDM generators are also ready.

If the turbines have issues during or around the storm, it could hamper the city's ability to drain rainwater.

Turner said the earlier near-misses helped set S&WB operators up for the storm.

"We've had five practice sessions, if you will, just this year," he said.

If flooding cuts off road traffic, or if downed trees and power lines shut off electricity, city officials expressed confidence that a shelter-in-place plan should be enough to keep residents safe, but warned that the storm is still gathering strength.

"If the intensity changes...we may have to reevaluate," Arnold said. "This is the sixth time this hurricane season I've stood here and asked people to be ready. We've had five near-misses."