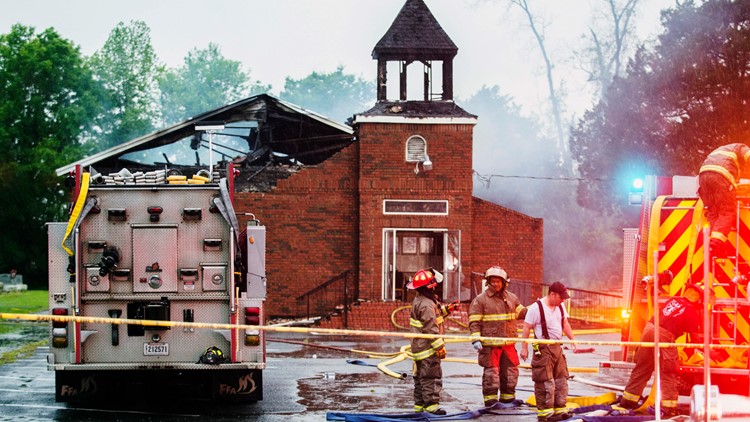 Photo by: AP
Firefighters and fire investigators respond to a fire at Mt. Pleasant Baptist Church Thursday, April 4, 2019, in Opelousas, La. Authorities in southern Louisiana are investigating a string of "suspicious" fires at three African American churches in recent days. Fire Marshal H. "Butch" Browning said it wasn't clear whether the fires in St. Landry Parish are connected and he declined to get into specifics of what the investigation had yielded so far but described the blazes as "suspicious." (Leslie Westbrook/The Advocate via AP)

PORT BARRE, La. — The Catholic Diocese of Lafayette has donated $50,000 toward rebuilding efforts of three Louisiana churches destroyed by arson.

The churches were destroyed between March 26 and April 4. Accused arsonist Holden Matthews is awaiting trial on state and federal arson and hate crimes charges.

The group met at the site of the former St. Mary Baptist Church in Port Barre, discussing their faith and the opportunities for goodness, love and charity that have grown from the tragedy. Deshotel said he and his congregants were saddened and horrified when the fires unfolded and they recognized a similar tragedy easily could have happened to one of their churches.

The funds were raised during a second collection at churches around the diocese in recent weeks. The more than $50,000 was divided equally among the three churches. Per church, that's more than $16,600.

While Jesus isn't in the buildings, it's important the churches have a home for congregants to worship and experience fellowship in, Deshotel said.

The bishop said they are all one under Christ and it's important community members work toward greater unity. 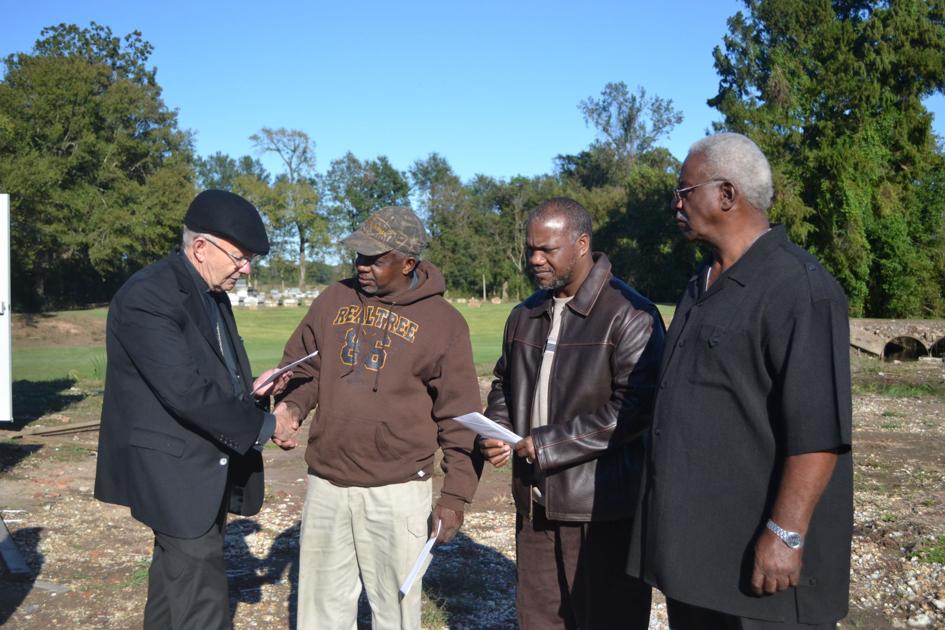 The Rev. Gerald Toussaint of Mt. Pleasant Baptist Church echoed the bishop's call, noting that different administrations of faith are God's way of reaching all people.

Deshotel said he was honored to play a small role in their recovery. "Evil brings opportunities for good and this is a good way to do that," he said.

The Rev. Harry Richard of Greater Union Baptist Church was touched by the gesture and said the donation is an example of love in action.

The pastor said he's looking forward to the day his congregation can return to a sanctuary of its own. They're currently worshiping in a small two-story building, and while it gives them opportunities to connect, it's not home, he said.

"When that was taken away from us, not only did it create a fire in our building, but it created a fire in our lives. That fire seems to be burning until we get back to our home," Richard said. "But the love that Bishop Deshotel and the rest of the community has shown has been a river of loving water that is helping put out the fire in our lives."

Community donors and supporters from around the country have rallied around the churches to provide funds for their rebuilding. In April, a GoFundMe campaign for the three churches raised over $2 million and other local businesses and organizations have donated.

The Rev. Kyle Sylvester, leader of St. Mary Baptist Church, said he doesn't know what to say besides thank you.

"It was a display of God's love. It shows that love goes beyond religion, it goes beyond race, it goes beyond the things that we get hung up on," Sylvester said. "Thank you for displaying what love really is and what Christ really represents."