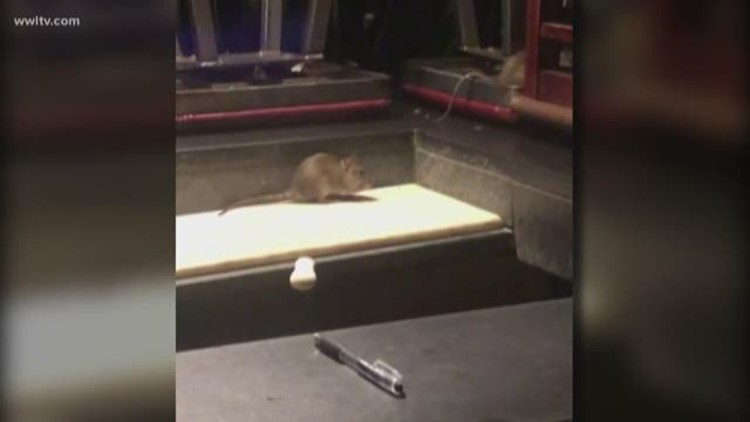 A passer-by shot the video through a window inside the French Market Restaurant and Bar on Decatur Street. It showed the rodents scurrying over chairs and plates in an area where oysters are served.

City Mosquito and Termite Control Board Director Claudia Riegel said Wednesday that a city inspector went to check out the restaurant after someone emailed her the video.

She also said her department had previously planned to bait every Quarter storm drain for rats beginning Thursday.

“The goal here is to provide enough bait for that particular area so that the animals do feed on it and it will knock some of those rodents back," Riegel said. "We do focus even more on places like Bourbon Street or Decatur Street, Canal Street, places where it's very heavy business focused."

Wednesday, a workman spent the day patching holes and fixing broken windows in front of the French Market Restaurant. That's how the rats got into the eatery during the weekend.

Marty Montgomery, who tends bar across the street, told WWL-TV that every business in the Quarter has problems with rats.

Some have dubbed New Orleans the “rattiest city in America.”

An American Housing Survey in 2015 showed more than 46 percent of households in the city reported a pest sighting which included rats, mice and roaches.

French Market Restaurant owner Anthony Marullo could not say when his business would reopen.

"The restaurant has been closed since this incident to make any needed repairs to the front of the building, and I can assure you that our food service areas are 100 percent clean and safe at all times," Marullo said. "Our customers’ health and safety are our priority."

Meg Lousteau, who runs the Vieux Carre Property Owners and Residents Association, said businesses have an obligation to help control the rodent population.

"At the end of the day, any kind of business has to abide by the health codes and guarantee some basic minimums," Lousteau said. "It sounds like the city is taking this very seriously, and we appreciate that."

She said holes as small as the size of a quarter or dime are large enough to let rodents in.

"A No. 2 pencil, if you put it under a door, yes a young animal, a rodent can go under that as well,” she added.