On Monday, the school said it had begun looking for Superintendent Joey Bishop's replacement after hiring an outside law firm in January to investigate "a series of anonymous complaints regarding Tulane University Police Department. 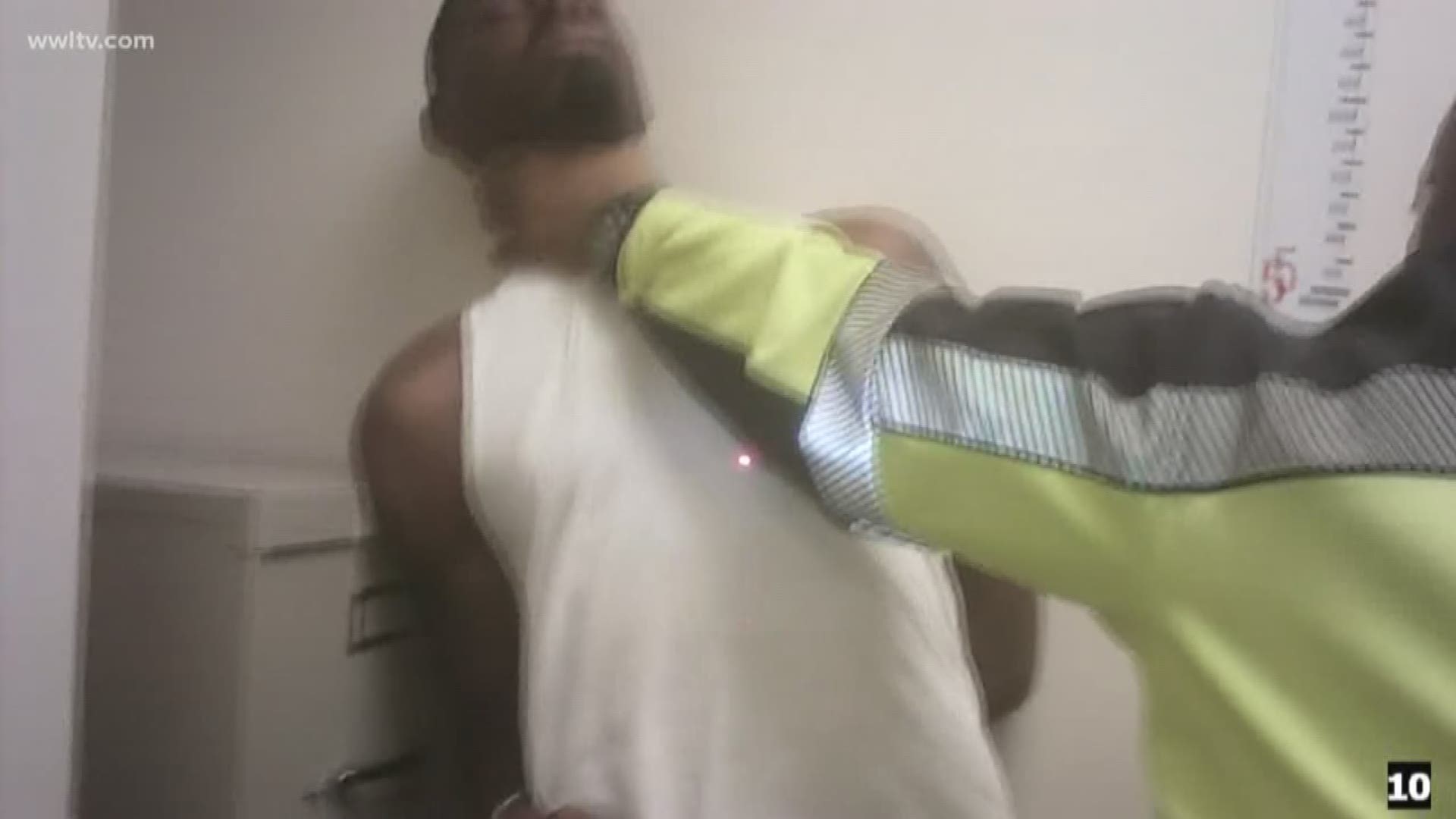 NEW ORLEANS - Tulane University’s police chief has resigned and other top officials have either resigned or been fired after an internal investigation and questions from WWL-TV about claims that top brass downplayed or tried to cover up incidents in which officers used excessive force.

On Monday, the school said it had begun looking for Superintendent Joey Bishop’s replacement after hiring an outside law firm in January to investigate “a series of anonymous complaints regarding Tulane University Police Department.” On Tuesday, as the TV station prepared to air its report, Tulane said that Bishop had stepped down.

WWL-TV received many of the same complaints and spoke to a dozen current and former Tulane police officers and supervisors over the last month. They all said they had witnessed or unwillingly participated in minimizing policy violations or incidents of alleged abuse over the past two years, when Bishop was running the department.

Two incidents in particular, in which Tulane police officers were patrolling off campus and used force against individuals who were not affiliated with the university, raise questions about the department’s conduct and its policy of regarding internal records as private. Tulane police officers have state commissions and powers of arrest, but as part of a private university, the force considers itself beyond the reach of public-records laws.

The most serious incident took place last year more than half a mile off campus. University officers were dispatched to a fight in the early morning hours of June 30 in the 7600 block of Maple Street, a stretch of bars, restaurants, offices and shops.

For years, Tulane has had a deal with the New Orleans Police Department to respond off-campus calls upon request, and officers say Tulane commanders treat the agreement as a standing order to patrol neighborhoods close to campus.

Tulane Officer Ja’Ronne Carter was the first to respond. In his incident report, Carter later recalled seeing two men run away from a crowd of people, one white and one black.

Carter, who is black, chased the black man. Carter’s supervisor, Sgt. Carlos Alvarado, arrived separately and saw Carter chasing a small, slight man near the intersection of Maple and Adams streets. Alvarado said in an interview that he was coming up behind the man, who had changed directions and was now running toward Carter, who ordered the man to stop.

Carter’s incident report says the man did not comply. Alvarado said and wrote in his report that the man did indeed stop.

At that point, Carter wrote, he grabbed the man’s “right shoulder with my left hand and pulled the subject to the ground.”

Alvarado said Carter actually lifted the much smaller man off the ground and threw him to the pavement.

“He came and grabbed him behind the neck area here, and picked him up and forcibly took him to the ground, causing him to land on his chest and facial area,” Alvarado said.

After handcuffing the man, Carter learned he was the victim. A witness confirmed his story -- that he had loaned his cellphone to a stranger, who then punched him in the face when he asked for it back.

Alvarado signed a form stating that Carter’s use of force was not consistent with law, policy and training and wrote that Carter did not give the man enough time to comply before taking him down “in an aggressive manner.”

The department empaneled a Use of Force Review Board of six supervising officers to decide if Carter’s actions were proper. And they decided unanimously that Carter had stepped over the line.

But Bishop ordered those findings changed.

Deputy Chief Shan Kirk filed a separate set of documents in Carter’s Internal Affairs file, including one purporting to come from Carter’s supervisor, Alvarado. But it was unsigned and had all the boxes checked to indicate that Carter had acted properly, contrary to Alvarado’s actual findings.

Kirk also added a new version of the Use of Force Review Board’s report that said the opposite of what the panel had ruled, with an X next to the word “compliance,” rather than “non-compliance,” and the space indicating a unanimous decision left blank.

“It looked like a kid who changed his report card who had never done it before,” said a current supervisor, who spoke to WWL-TV on condition of anonymity. “It looks as if someone covered up the area and made a copy.”

After receiving questions from WWL-TV about the changes, Tulane Commander Jarrod Sullivan reviewed that document and marked “VOID” on the version filed by Kirk. In a March 22 memo, Sullivan said Bishop had the authority to direct revisions to the file, but called the way the changes were made "procedurally incorrect."

Bishop had ordered up the changes in an email in August, saying, “Both versions should be retained for transparency of process,” but when Sullivan reviewed Carter’s internal affairs file he found only the altered version.

“Interim Superintendent Joey Bishop disagreed with the recommendation of the Board in this case and found no violation of policy. Instead of simply recording that decision, however, the initial forms themselves were changed,” Tulane said in a written response to questions. “That mistake has been corrected. Ultimately, no use of force policy violation was found and there was no deception to any outside agency about that fact. But our internal records should have reflected the actual procedure used and forms should not have been changed.”

Bishop also asked his commanders to change some of the department’s use-of-force policies. Tulane said it’s still investigating whether Bishop tried to change those policies retroactively to keep Carter in compliance.

An earlier controversial incident came on New Year's Day 2016 in the emergency room at Tulane Medical Center downtown, a hospital affiliated with the school but owned by the for-profit company HCA Healthcare Inc.

A woman who was being treated for injuries accused her estranged husband of beating her and violating a stay-away order by following her into the ER waiting room. Surveillance footage shows four Tulane police officers confront the husband, Janard Brister, who appears to resist arrest and wrestle with officers before they subdue him and handcuff him. The officers then walk a clearly belligerent Brister to a police office inside the hospital.

An incident report drawn up by Sgt. Errol Peters describes a handcuffed Brister kicking chairs and trying to ram him and the other officers with his shoulder.

A series of video clips recorded by a camera affixed to Peters’ Taser shows Officer Clifton Thomas holding Brister by the throat against a filing cabinet, keeping his grip a full five seconds while another officers yells, “Let him go! Let him go!”

A few moments later Brister is back in his chair, his hands still cuffed, daring Peters to shoot him with the Taser. Peters does just that, and Brister is seen falling to the ground on his chest, forcing the Taser’s prongs deeper into his body.

Reports filed by Peters, Thomas and a third officer in the room, Justin Vinette, say nothing about Thomas grabbing Brister’s throat and describe Brister getting back up and charging at them again before Peters fired the Taser.

A Tulane Police supervisor who spoke to WWL-TV on condition of anonymity said the officer’s chain-of-command concluded it was improper to shoot the Taser in that situation.

Records released by Tulane show all three commanding officers who filled out a report on the incident agreed the use of force was unjustified. Capt. Angela Davis, who oversaw downtown patrols at the time, found Peters’ narrative “inconsistent with video evidence,” declared the “hand choking” on the part of Thomas unauthorized and recommended demotion, suspension and possible termination for Peters.

Commander Jarrod Sullivan initially agreed with Davis in February 2016. But sources high up inside the Tulane Police Department say Bishop, then serving as chief after arriving recently from Nashville, ordered Sullivan to change his ruling.

Sullivan filed a new report the following month recommending only written reprimands for Peters, Thomas and Vinette. Davis said she also changed her initial recommendation, which she called a “rush to judgment.”

“Everyone thought their career as law enforcement officers was over, the people in the video. And no one was doubting that,” the anonymous supervisor said. “That's not what happened.”

Thomas and Vinette still work at the department; Peters left for unrelated reasons recently, two years after the incident.

In a written response to questions, Tulane said Davis’ initial determination was made before a thorough investigation, and an outside law firm hired by the university is taking a fresh look at the use of force against Brister. But so far, the school is standing by the officers’ use of force.

“Taking into consideration the information obtained during the investigation, the seriousness of the criminal charges and the active and excessive resistance by the subject, and the immediacy of the threat posed by the subject, the findings are within reason,” Tulane’s statement said.

Brister was sentenced to 19 months in prison for battery and criminal trespass related to his treatment of his wife.

Tulane said its off-campus patrols have helped reduce crime both Uptown and downtown near the medical school.

“In addition to their efforts in keeping our campuses safe, cooperation between TUPD and the New Orleans Police Department in patrolling the streets adjacent to our campuses has led to a significant reduction in crimes such as armed robberies and burglaries in these areas,” said a statement from Tulane administration.

The school said it hired a former federal prosecutor and former judge to lead its internal investigation in January, and now Tulane has hired another outside firm to review its police policies and procedures.

“We are confident that we will continue to make progress in our crime-fighting efforts through our focus on and investment in security, prevention and protection, as well as our commitment to providing our police department the resources and leadership they and the Tulane community deserve,” the Tulane statement said.

The administration said it has also fired another member of Bishop’s command staff and demoted some high-ranking officers. But the changes at the top have come too late for some officers who say they were targeted by Bishop and his preferred commanders and have been forced out or resigned.

Alvarado is one who said he couldn’t take working there anymore. Jaron LeBeauf is another. He came to WWL-TV when he was still on the force, but resigned recently because he felt his complaints about managerial issues were leading to retribution. He said Bishop ran the department “like a dictatorship” and took aim at officers who don’t, in Bishop’s own words, “drink the Kool-Aid.”

LeBeauf and others said they could deal with disputes with their bosses, but couldn’t abide by the way Bishop and his team policed themselves.

“You want to target me, I can deal with that,” LeBeauf said. “When I didn't get the results I feel I should have got, I went to the (Equal Employment Opportunity Commission), so I can deal with that. But when you get to the point where you're violating citizens' civil rights and you're not acting accordingly, that's when I have enough.”