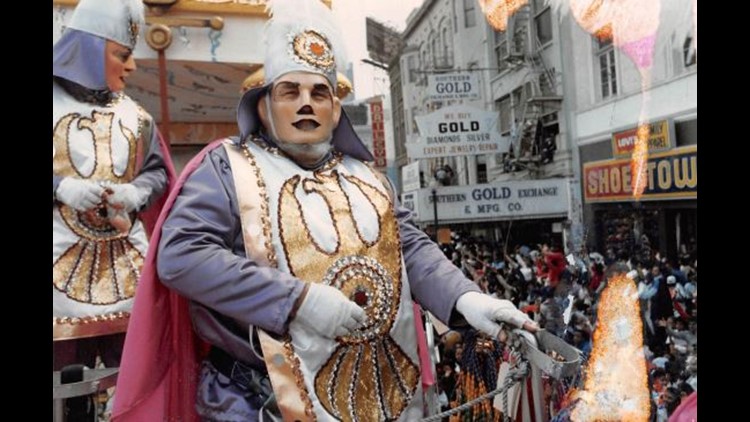 For 37 years, from 1962 to 1999, local news icon Phil Johnson delivered the editorial opinion of WWL-TV. But for two days every year (on Fat Tuesday and the Monday before), Johnson, the station’s news director and later assistant general manager, would strike a less serious tone with his fondly-remembered editorials for Mardi Gras.

Here is his editorial delivered annually on the Monday before Mardi Gras:

And what else is there to talk about except that which everybody else is talking about of course, Mardi Gras.  It’s that time again, that wonderful, crazy, colorful, crowded, happy, mixed-up but glorious time when all New Orleans forgets itself for a day, lets its hair down, puts on a rubber nose, a funny hat, and walks around laughing at the silly people in the crazy costumes.

It’s a day for contrasts, a day for change.  A day when legions of quiet, timid, introspective little men forsake their cashier’s windows and their neat clerk’s desks, put a mask across their face, and suddenly become Don Juan.  A day when a secretary can become Queen of England; a housewife, Annie Oakley.

Mardi Gras is fantasy in a fright wig, reality with burnt cork on its nose, a dream with a scepter in its hand, and pompousness about to be punctured. Mardi Gras is fun and laughter, vulgarity and coarseness, color and light, and at the end, quiet.  Mardi Gras is a state of mind, an attitude, a pose, an opinion.

But at its most basic, and perhaps most satisfying of all, Mardi Gras is the one day in the entire year when New Orleans can tell the whole world: “We’re going to have fun!”  And we do.

No one should be serious on Mardi Gras Day.  So we won’t be.

But we do reserve the right to be serious tomorrow.