Venue managers and band members say they are not responsible for the flyers asking for anyone with information to come forward. 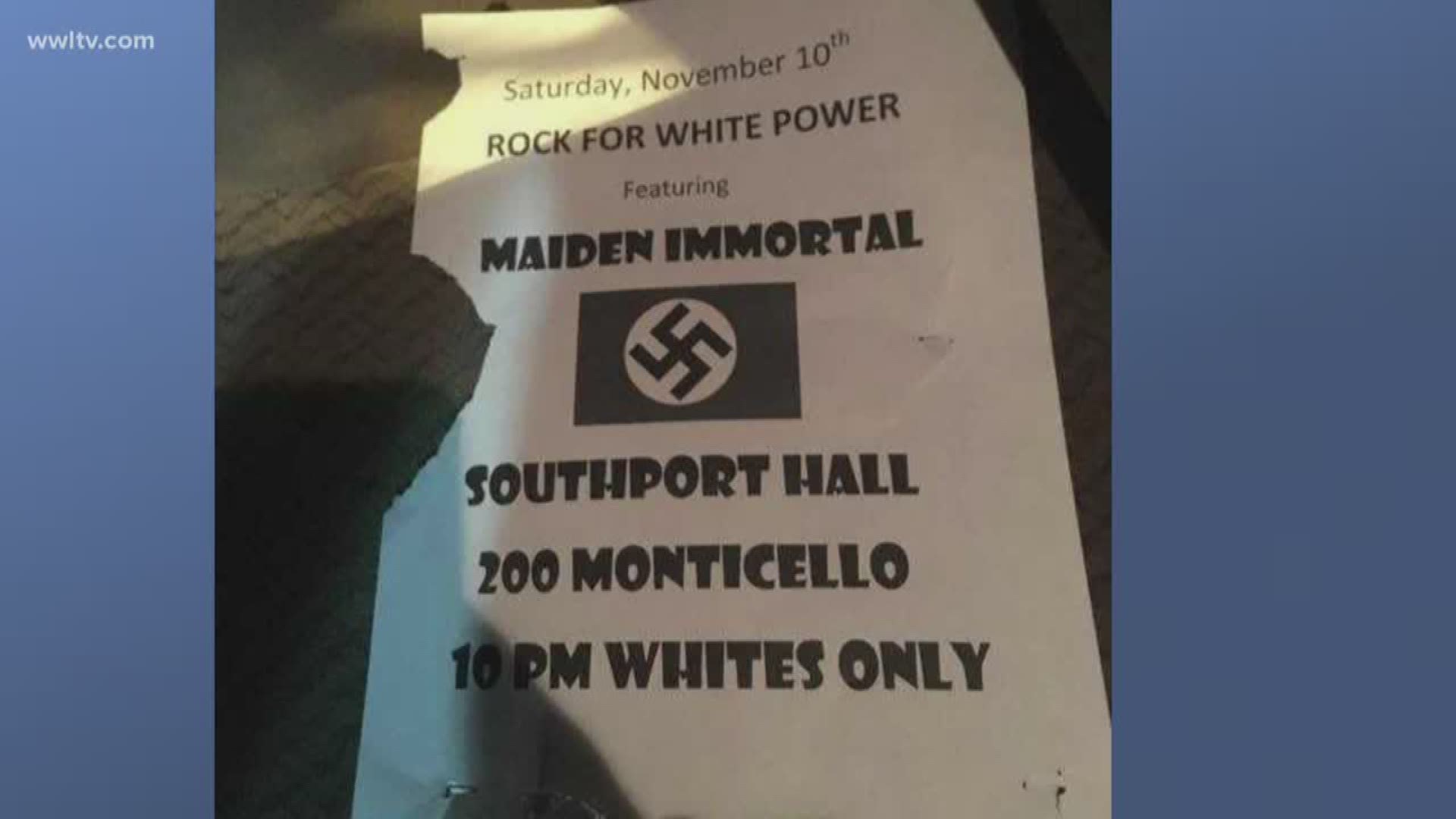 A Jefferson Parish music hall is asking for anyone with information to come forward after flyers promoting a “Whites only” event scheduled for Saturday night were posted around the area.

The flyers posted read, “Rock for White Power featuring Maiden Immortal” with the address to Southport Hall Live Music & Party Hall and Saturday’s date, with a Swastika symbol and at the bottom of the flyer it reads “10 PM Whites only.”

Southport Hall Live Music & Party Hall owner Jay Bagnetto told WWL-TV the venue is not responsible for the flyers and he hasn’t experienced anything like this in the venue’s history.

“We’ve been open for fifteen years and this hasn’t happened before,” Bagnetto said.

The venue also posted on social media denouncing the flyers and said police have been notified.

“Neither the bands performing or Southport Hall has anything to do with the appalling claim being promoted on this flyer,” the post read in part.

According to Southport Hall’s post, police have been notified of the flyers and extra security has been hired for the event. The band, Maiden Immortal, promoted on the flyers also said they had nothing to do with flyers and were also upset when they found out about them.

“Our guitarist arrived ahead of us and was shocked,” band co-founder and bassist, Joe Hammond told WWL-TV.

Hammond said the guitarist who first saw the flyer was so upset that he wanted to cancel the show.

“We would never condone anything like this,” Hammond said.

The band, from Pensacola, also posted on social media to set the record straight and make clear to their fans that this is not what the band represents.

“We find this flyer to be horribly offensive, and we want to let all of our fans and friends know we love and appreciate everyone regardless of race, religion, sexual preference, etc.,” band member Gary Humphrey wrote the band’s Facebook page.

“Know we love and accept everyone, and I sincerely hope the person who has done this is caught. There is no room in this world for hate and intolerance,” Humphrey wrote.

Venue owners are asking for anyone with information on who posted the flyers to contact them or the police.

This is a developing story and will be updated as more information is available.