Barnett perfected public relations at several hotels, including the Royal Orleans, Fairmont & Hilton. She was also a pioneering sports journalist and tennis star. 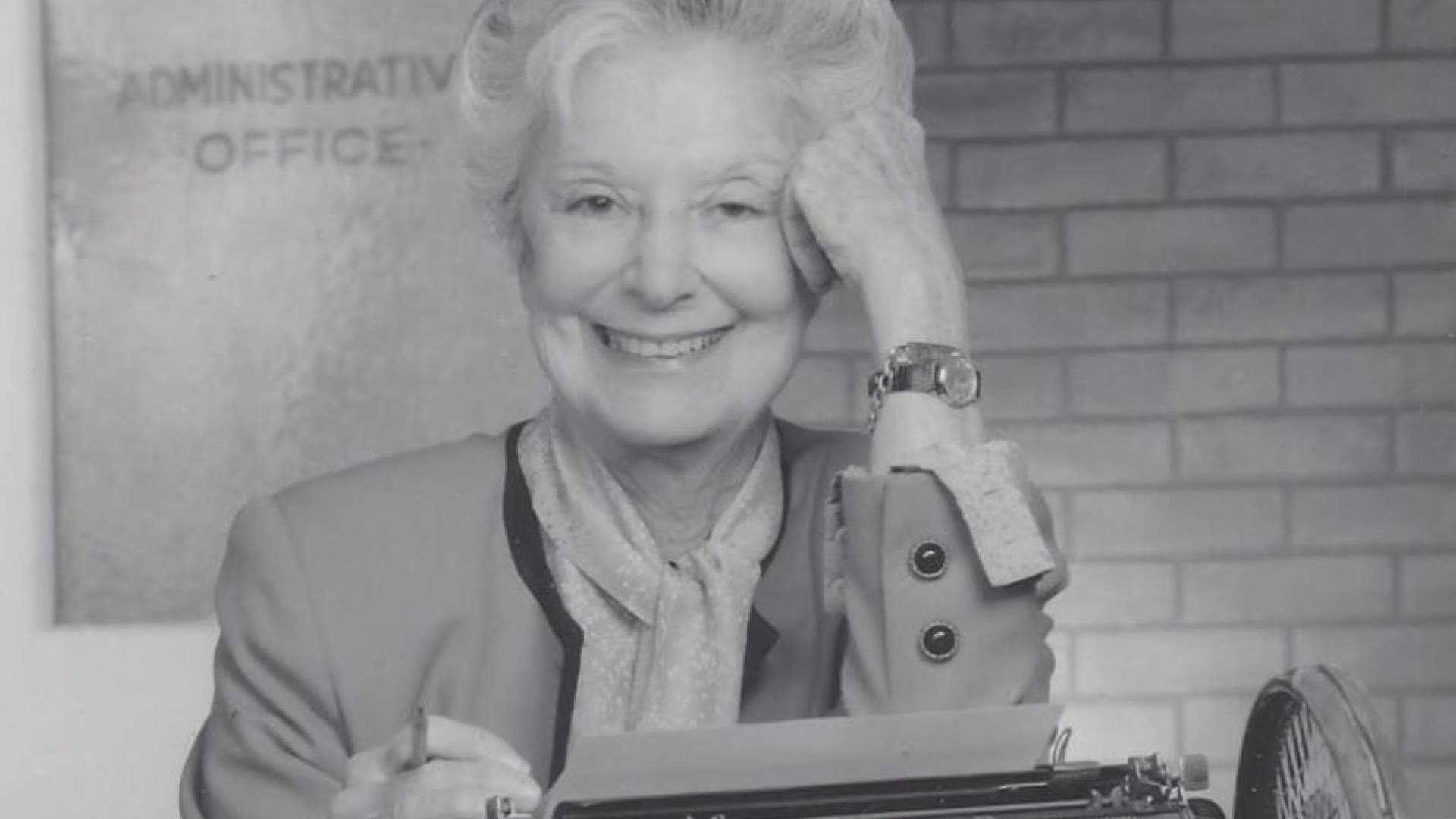 NEW ORLEANS — Marilyn Barnett, who perfected the art of public relations for nearly four decades at the Royal Orleans, Roosevelt and Hilton hotels, where she developed friendships with movie stars, famous authors and symphony conductors, died Sunday. She was 97.

Ms. Barnett, known to colleagues and friends as “MB,” rose to become one of the local public relations industry’s most talented practitioners. She was described in a 2005 Times-Picayune article as a “one-woman media conglomerate.”

In addition to her public relations career, she was a classical disc jockey, holder of numerous tennis titles, a newspaper reporter and one of the first female sports journalists in the South.

But Ms. Barnett is best known for her stints representing the biggest New Orleans hotels. According to her nephew Jim Barnett, her first hotel public relations job was at the brand-new Royal Orleans in 1960, a position she landed after giving a newspaper columnist an item about the French Quarter hotel’s general manager. The general manager was impressed by the publicity and offered her the job.

During her nearly ten years at the Royal Orleans, Ms. Barnett assisted Arthur Hailey in research for his novel “Hotel." She became his informed source about local hotel history. When the protagonist in his book described the Royal Orleans as “the finest hotel in North America,” Ms. Barnett scored a stroke of PR genius.

As a result of their friendship, she became the model in 1968 for publicist Tanya Livingston in Hailey’s “Airport,” a heroine noted for typing in lower case, a signature trait of Ms. Barnett’s.

“Good public relations means that nothing is too much trouble, either for your guests or your property. Whatever is needed, it can be done. It also helps if you bring a certain graciousness or elan to the work and of course, you should really like what you do," she once said of her work.

After leaving the Royal Orleans, she moved to the Fairmont (Roosevelt) Hotel for 12 years where she handled the bookings, in-house advertising and publicity for stars who performed at the hotel's famed supper club, the Blue Room - everyone from Lena Horne to Tiny Tim. For years, she hobnobbed with and coddled celebrities, once lending her coat to actress Imogene Coca and dancing with mob boss Frank Costello.

In an interview with former Times-Picayune theater writer David Cuthbert, she remembered Ella Fitzgerald as “wonderful but aloof,” called Richard Harris “rather difficult” and said Tina Turner was “tough to deal with.” Pearl Bailey called her “Sister.” They even shared crawfish and crabs at West End. Ms. Barnett also stood on Eartha Kitt’s shoulders to rescue a baby blue jay in Audubon Park.

Ms. Barnett worked behind the scenes attending to celebrities, arranging dinners and seeing to every detail. For example, she knew that Marlene Dietrich preferred yellow and white flowers in her hotel room and Dom Perignon. “A hotel is a paradise of stories,” Ms. Barnett told an interviewer.

Ms. Barnett would know a good story, because she began her career writing them. A New Orleans native, she went to work at the New Orleans Item in 1944. During a five-week apprenticeship under editor Clayton Fritchey, she clipped and filed newspaper obituaries in the Item’s “morgue.”

She went on to become a news reporter on the city desk and then feature and sports writer in 1951. She interviewed baseball legends Joe DiMaggio and Leo Durocher and Italian professional wrestler fighter Primo Carnera.

She also covered horse races, basketball, boxing matches and football games at Tulane Stadium, where she recalled she had to sit directly beneath the press box since no women were permitted inside. She said the isolation from the other writers allowed her to soak in all the elements of the game from the stands.

She penned a tennis column, called “Drop Shots,” and later became a golf columnist, one of a handful of women golf writers in the country at the time.

After the Royal Orleans, Ms. Barnett had stints at the Royal Sonesta, Hotel Iberville (now Westin Canal Place) and a dozen years at the Hilton New Orleans Riverside, where she was inducted into the hotel's Walk of Fame, honoring prominent citizens of New Orleans.

In addition to her work in sports and public relations, Ms. Barnett also dabbled in radio. She was the first classical music disc jockey for radio station WTIX. Her show was initially called “Waxing Eloquent,” but she changed it to “Afternoon Symphony.” That also led to a job in public relations as the publicist for the New Orleans Philharmonic Symphony from 1954 to 1960. It became her first public relations gig. She was dubbed the “Typewriter Timpanist.”

A 1976 New Orleans Magazine profile summarized Ms. Barnett’s approach to public relations: “One senses about Marilyn that there is a certain order to the world, ways that things should be done and said, ways to hold a tennis racket and select wine."

"There is a perceptiveness about her," the magazine wrote, "that borders on vigilance when it comes to hotel affairs: too much cassis; a waiter chewing food on duty, a screw protruding from the carpet near the escalator; a drooping centerpiece; a businessman wearing a short-sleeved shirt with a pin-striped suit. She misses very little. In Marilyn’s realm, things are comme il faut, (as it should be.)”

In her private life, Ms. Barnett was an accomplished amateur tennis player who covered the Eastern Tennis Circuit for the States-Item at the same time. She won 13 titles including city singles champion in 1944. She was ranked number 10 in women’s doubles in the South. Barnett was still taking home trophies in 1980 at the age of 57. She won so many over her lifetime that she donated dozens of trophies to the Salvation Army so the awards could be re-engraved for others.

“As a tennis player, Marilyn isn’t one of those girls who you occasionally see in the periodicals daintily holding a racket with her demitasse finger. She’s dainty enough but along with this she’s authentic,” a sports magazine wrote in 1960.

She was inducted into the Greater New Orleans Sports Hall of Fame in 1994. She was also recipient of the 1988 President’s Award from the Press Club of New Orleans.

Ms. Barnett was a graduate of Isidore Newman School and Hood College in Maryland. Her nephew said she was informed by an instructor there that she would never write well. Ms. Barnett said she later mailed the professor her first byline newspaper story as a triumphant vindication.

Her correspondence with many of the stars she worked with during her career – including thank you notes, autographed photos, press clippings, artwork, cards and gifts - comprise nearly 5,000 documents donated to the Historic New Orleans Collection.

In retirement, Ms. Barnett, an animal lover, devoted much of her time to animal welfare. She was a devoted supporter of the Louisiana SPCA, Chimp Haven and the Humane Society of Louisiana. Family members said she would load her car with pet food and drive around the city to feed and catch stray cats, have them neutered and returned to their neighborhoods or adopted.

No memorial service is planned. The family asks that any memorial donations be made to the Louisiana SPCA, Chimp Haven and the Humane Society of Louisiana.

RELATED: In memoriam: Locals we lost in 2020